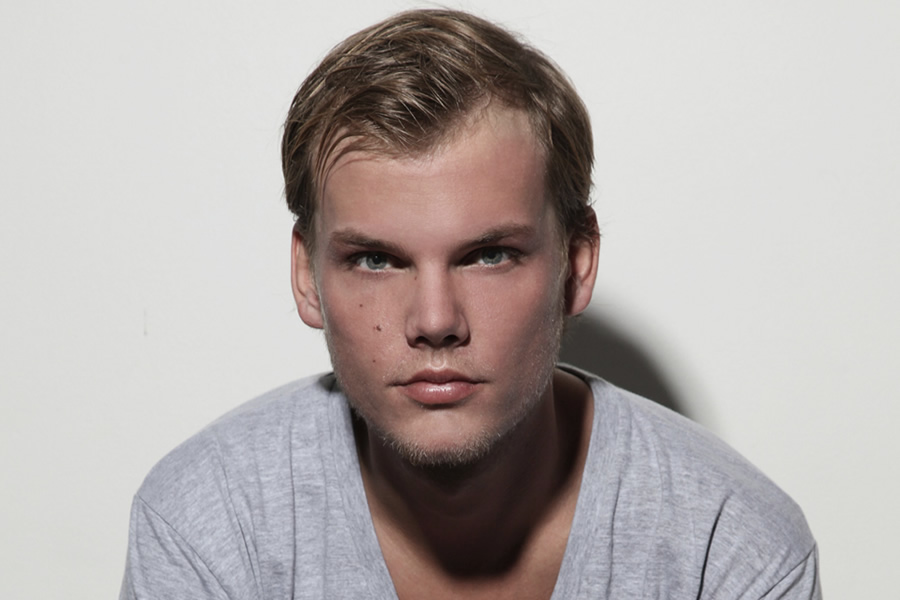 Avicii (real name Tim Bergling) was a Swedish DJ and electronic music producer, best known for his smash-hits such as ‘Levels’, ‘Hey Brother’ and ‘Wake Me Up’.

Tim began producing and remixing electronic music from an early age and rose to prominence in 2011, when his huge hit ‘Levels’ became a worldwide phenomenon.

He is widely regarded as one of the most talented DJs and electronic music producers of his generation.

Avicii retired from touring in 2016, citing health problems after having suffered from stress and anxiety for a number of years.

Despite the heartbreaking circumstances surrounding his death, Avicii will live on in his music.

This in-depth Avicii biography is going to focus on Tim’s impressive rise to prominence as one of electronic music’s recent names. 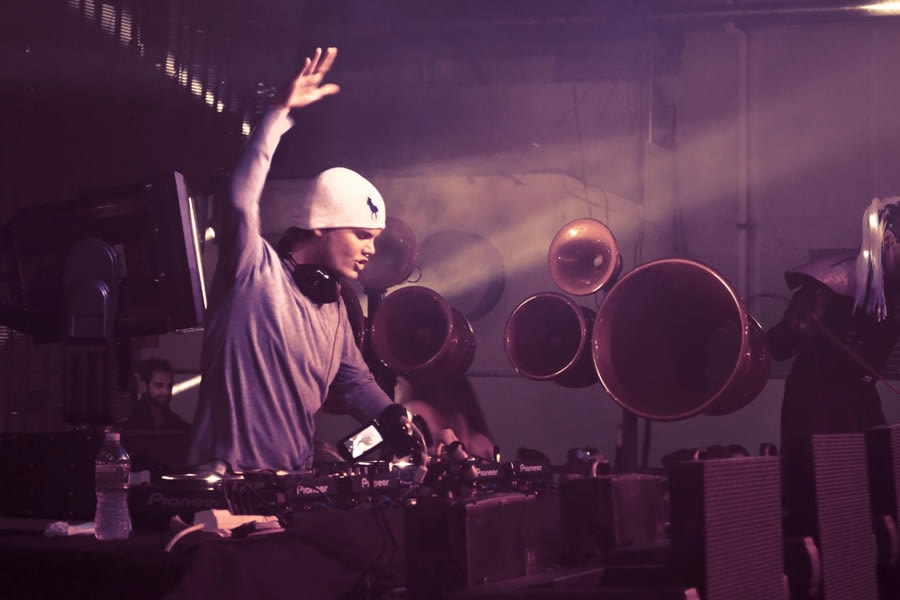 We are going to take a close look at how he managed to use his incredible talent to reach so many people through his music.

We are also going to pick out the positive things we can learn from Avicii, despite the tragic way his life ended.

Avicii (Tim Bergling) was a Swedish DJ and electronic music producer who was widely regarded as one of the most talented in the industry.

Tim was born on 8 September 1989 in Stockholm, Sweden to parents Klas Bergling and Anki Liden. His mother Anki was an actress who appeared in more than 50 film and television shows.

He began making music as a teenager, by writing and remixing tracks in his bedroom and uploading them onto the internet.

“Whatever I was going to do later in life, I knew I was going to do something creative,” Tim said in the documentary Avicii: True Stories. “A friend of mine told me about FL Studio. I remember I downloaded it and started playing around with it. It was very easy because you could draw out the notes.

“The first half year was just my trying to rip off other peoples’ sounds. Once you’ve done that 1,000 times, you start improvising. That’s when I started coming up with ‘unique’ stuff.”

Tim sent his first tracks out to blogs and contacted music producer and DJ Laidback Luke (Lucas van Scheppingen) to send him some of his demos.

Laidback Luke’s interest was peaked. He started giving Avicii feedback on his initial tracks as he continued to produce new songs.

It was around that time that Tim first met Iranian-Swedish record manager Arash Pournouri and signed a record deal with Dejfitts Plays.

Tim explained how Ash first reached out to him: “He sent me a message on Facebook saying, ‘Hey, my name is Ash Pournouri, and I have some friends in the industry. I’m a promoter in Stockholm and I think I can help.'”

The most successful track of his early releases was ‘Seek Bromance’, which came out in October 2010 and reached the top 20 on a handful of European charts.

It was around this time that he signed with the European A&R team with EMI Music Publishing.

The first show he played was in Miami in 2010 in a 200-capacity club as part of an event organised by Laidback Luke. 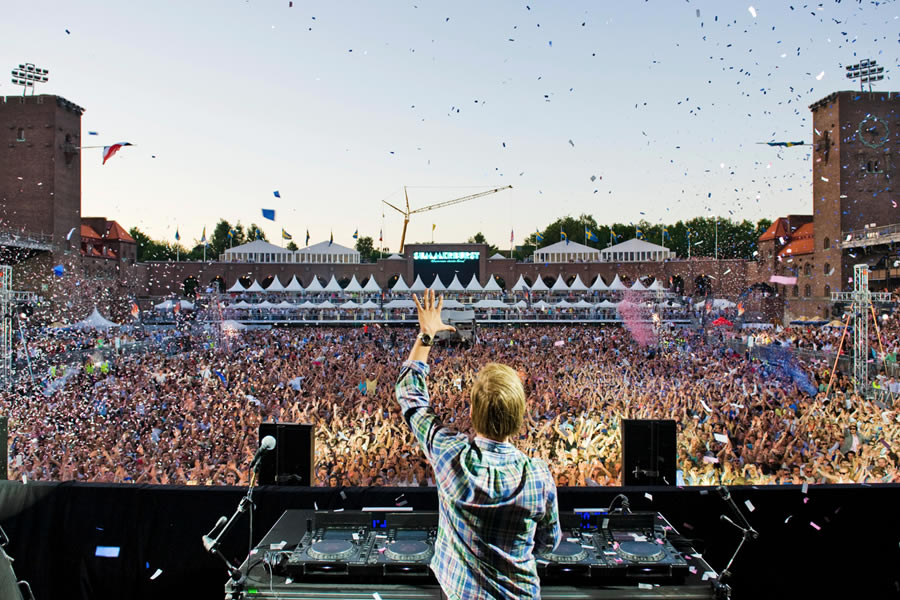 Avicii released ‘Levels’ in 2011, and its huge success catapulted him into the mainstream and established him as a household name. It was a top-10 hit around the world and Tim’s life was never going to be the same again.

Reflecting on that hectic period, Tim said: “I was young, I was single. Every show was a big party. It was amazing.”

Tim was firmly in the limelight and he released his first studio album in 2013 entitled ‘True’. At this point, he was touring and performing regularly.

‘True’ ended up being a multi-platinum LP and it featured collaborations with the likes of Adam Lambert, MØ, and Nile Rodgers. It also featured some of Avicii’s biggest hits, such as ‘Hey Brother’ and ‘Addicted to You’.

In 2014, Avicii scored yet more mainstream attention when he collaborated with Coldplay to help produce ‘A Sky Full of Stars’.

Avicii released his second studio album ‘Stories’ in October 2015. It was another smash hit and included some of his best-known tracks, including ‘Waiting for Love’, ‘For a Better Day’, ‘Broken Arrows’ and ‘Pure Grinding’.

On 29 March 2016, Tim announced that he would be retiring from touring via a post on his Facebook page. Clearly, the hectic lifestyle that had followed on from the success of ‘Levels’ had taken its toll. 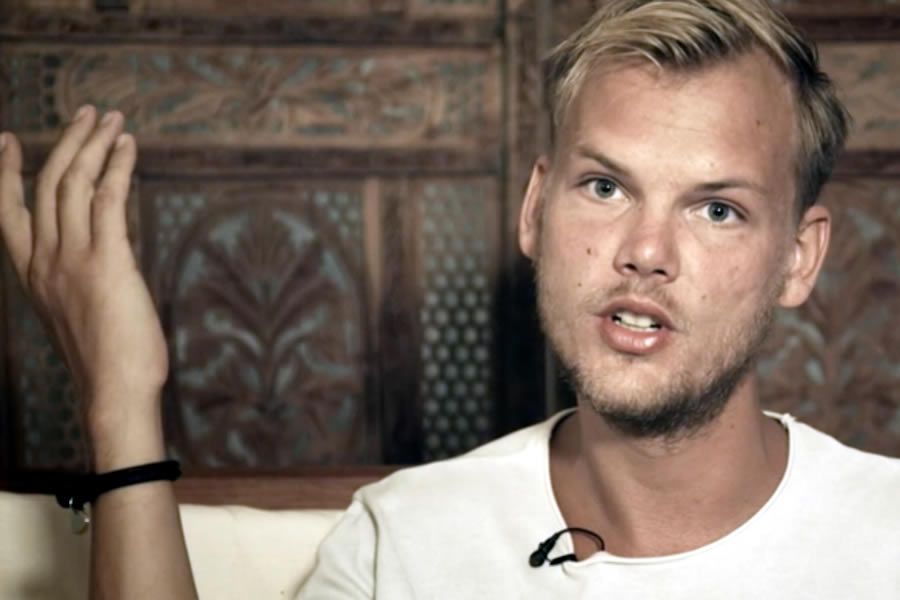 In the open letter to his fans on his Facebook page in 2016, Avicii said: “My choices and career have never been driven by material things, although I’m grateful for all the opportunities and comforts my success has availed me.

“I know I am blessed to be able to travel all around the world and perform, but I have too little left for the life of a real person behind the artist.”

His decision to retire from touring had come after some struggles with health problems. For example, he was hospitalized for 11 days in New York City with acute pancreatitis.

In 2014, he underwent surgery and had both his appendix and gallbladder removed.

Tim once said in an interview: “Drinking became routine for me, but it’s impossible to keep up touring and drinking at the same time, because you are going to crash.”

Clearly, his incredible success had come at a price, by negatively affecting his mental and physical health. 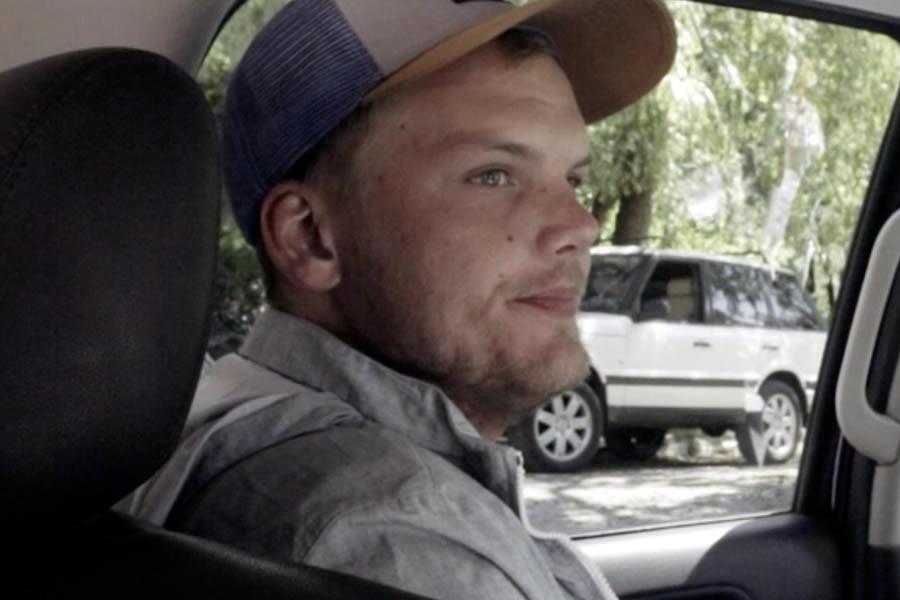 Avicii’s final EP called ‘Avici (01)’ was released in August 2017 and featured hit tracks such as ‘Lonely Together’ and ‘Without You’.

He committed suicide in Muscat, Oman, and was buried on 8 June 2018 in his hometown of Stockholm.

When the news of Avicii’s death first broke, there was no official cause of death given. Omani police said that there was “no criminal suspicion” the day after his death.

However, it has since been widely reported that Avicii committed suicide.

Following his death in April 2018, a posthumous album entitled ‘Tim’ was released on 6 June 2019. It features collaborations with big names such as Aloe Blacc, Chris Martin, A R I Z O N A, and Imagine Dragons. 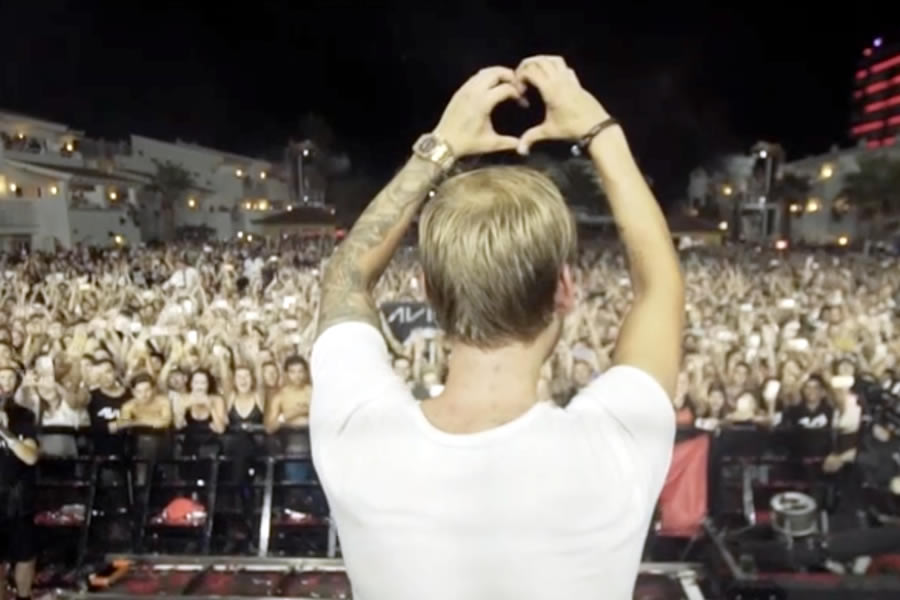 Avicii’s death prompted a flood of tributes both from those in the music industry and those not.

Here is a selection of the Avicii tributes from fellow musicians, rounded up from social media and elsewhere.

The Chainsmokers’ Drew Taggart: “His passing was a great loss for the music world and for us. He was an artist who inspired so many in so many ways, and simply put, he meant so much to us and everyone in the EDM community.”

Kygo: “Can’t believe this is true..my biggest inspiration and the reason why I started making electronic music. Thank you for all the joy you brought to the world with your music. RIP.”

Dua Lipa: “Such sad news to hear about Avicii passing. Too young and way too soon. My condolences go out to his family, friends and fans.”

Laidback Luke: “Let’s make sure we all remember and honour Avicii. The best way to do that is to keep his legacy alive. Listen to his music, watch his videos, watch the documentary and tell your friends, tell your parents, tell your kids about this amazing guy Tim, aka Avicii that had such an amazing influence and was such a lovely sweet hardworking kid but also tell everyone about his mistakes so we can all do better…”

Imagine Dragons’ Dan Reynolds: “Devastated at the news of Avicii passing. Working with him was one of my favorite collaborative moments. Far too young. The world was a happier and fuller place with his presence and art. Sending all my love to his friends and family.”

Tiesto: “Words can not describe how I feel right now..I am gonna miss you brother.”

Nicky Romero: “Tim, I can’t believe what I just heard, you have gone way to early, there are no words to describe how I feel, I am thankful for all the great moments we got to spent together; and thankful for all the things I got to learn from you. The world will miss you. RIP Avicii.”

Skrillex: “Tim was a truly a genius and an innovator, yet sensitive and humble. This industry can be rough and from a far I saw it take a tole on him. I just wish I could have hugged him more and told him it would be okay. Your music will forever be a part of mine and so many other lives. Maybe that’s the closest thing we have to immortality. I really hope you’re essence, wherever it may be in the universe, is now at peace. And if in some miracle you can see this, I hope you know that as long as human beings are alive on this planet, you will forever remain an inspiration. Thank you Tim. RIP.

Tim’s ex-girlfriend Emily Goldberg: “For the two years we were together, he was my closest confidante, and my best friend. Now I can’t look at Bear without knowing I’ll never see his face again. I’m still collecting my thoughts and thank you for all your kind words and texts. Wake me up when it’s all over, because I don’t want it to be real.”

Avicii’s real name was Tim Bergling. He was also known as Tim Berg or Tim Hangs.

However, he chose to adopt the Avicii alias because the usernames above were no longer available on Myspace.

In Buddhism, the word ‘avici’ means the lowest level of the Naraka or ‘hell’ realm, with the most suffering. He added the extra ‘i’ because that username was also taken on Myspace. 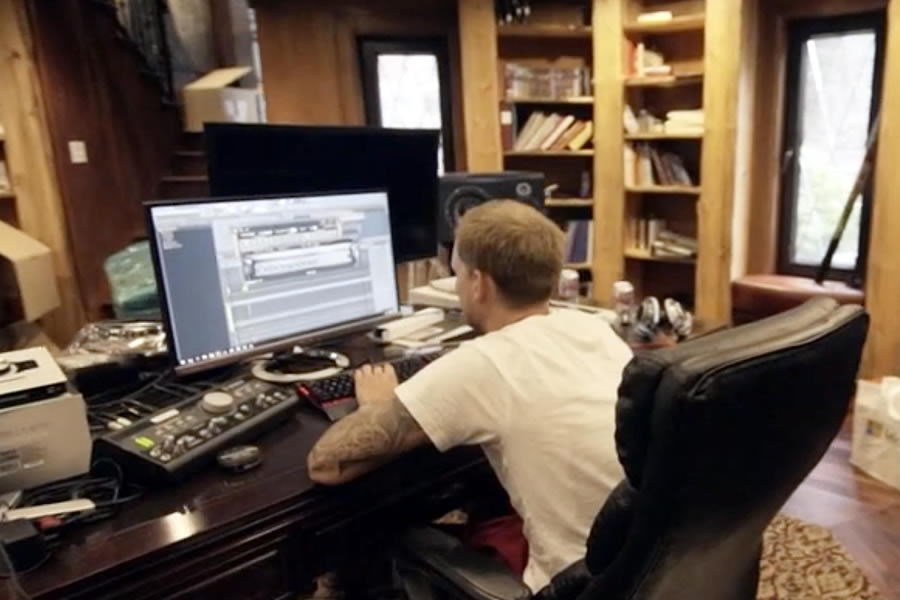 There is no official figure for Avicii’s net worth at the time he died.

There are various reports online that his net worth was around $50m, but that is not confirmed.

According to an article published in Forbes in January 2019, Avicii died without a Will.

What Can We Learn from Avicii?

Quite clearly, Avicii’s story is a hugely inspirational one which ended in tragedy.

His rise to prominence from remixing tracks on his laptop in his bedroom to playing sold-out shows around the globe is nothing short of incredible.

However, Tim clearly struggled to deal with the success which came his way and the hectic lifestyle that followed.

His retirement from touring in 2016 served a clue as to how much stress he was feeling after years of touring the world.

If there is one thing to take from Tim’s story, it’s to keep an eye on those close to you who may be dealing with stress, anxiety and difficult circumstances.

Tim’s story is both inspirational and tragic.

In just a few years, he established himself as one of the biggest names in the electronic dance music scene and scored collaborations with some huge artists.

His death came as a shock to the music world but his music will remain forever.

In time, the tragedy of his death at 28 years old will hopefully not overshadow the huge amounts of joy he has brought to millions of people around the world through his music.