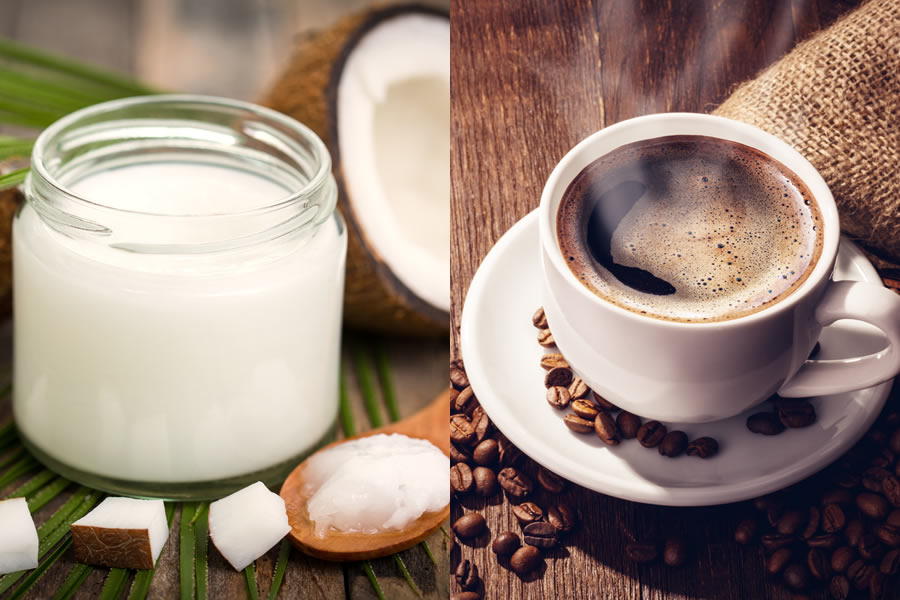 Coconut Oil in Coffee is claimed to have some benefits (Photo: Adobe Stock)

Coconut Oil in Coffee has become much more popular recently as people look to gain the maximum benefits from their morning brew.

Putting any kind of oil or butter in your Coffee may sound weird at first, but it’s become a popular trend recently.

If you’re looking to find out the best recipe for Coconut Oil in Coffee, then you’ve landed in the right page.

In this article, we’re going to take a look at just why adding Coconut Oil to Coffee has become so popular recently, and explain the best way to incorporate it into your diet.

Products such as Bulletproof Coffee have become incredibly popular in recent years – but why?

We’re going to take a close look at this trending recipe to find out exactly what all of the buzz is about.

So, with the introductions out of the way, let’s kick things off by taking a closer look at Coconut Oil itself.

What is Coconut Oil?

If you’ve landed on this article looking to find out more about using Coconut Oil in Coffee, then the chances are that you already know about Coconut Oil.

In case you didn’t know, Coconut Oil, also sometimes known as Copra Oil, is an oil extracted from the kernel or meat of mature coconuts harvested from the coconut palm.

It has become incredibly popular in recent years as an alternative to other cooking oils such as vegetable oils.

Coconut Oil is touted to have a number of health benefits, which is why a lot of people choose to add it to their diets.

Coconut Oil is a calorie dense substance. One teaspoon on Coconut Oil contains around 40 calories and around four grams of saturated fat.

There are not many studies into the benefits of consuming Coconut Oil ahead of other fats, so there are not too many conclusions to be drawn here.

However, there is one notable difference between Coconut Oil and other fats.

Coconut Oil contains a high proportion of a type of fat called Medium Chain Fatty Acids, most notably in the form of Lauric Acid.

Medium Chain Fatty Acids are claimed to have a number of health benefits, including being less likely to be stored in the body as fat and more easily used as a source of energy.

Coconut Oil is often used as an alternative cooking oil. It has a high smoke point and is solid at room temperature.

The high Saturated Fat content of Coconut Oil is one of the major sources of debate.

As we mentioned above, one teaspoon of Coconut Oil can contain as much as four grams of Saturated Fat.

In case you didn’t know, Saturated Fat has long been seen as a risk factor for elevated Cholesterol and heart disease.

This is mainly because some studies have shown that Saturated Fats can lead to a increased levels of LDL (bad) cholesterol.

There is a lot of debate about Saturated Fat. One of the health bodies in the UK for example, advises that for heart health, you should replace Saturated Fat with small amounts of unsaturated fatty acids found in things such as olive and rapeseed oils, avocados, nuts, seeds and oily fish.

It’s important to realize that Fats are the most calorie-dense micronutrient at around nine calories per gram. Therefore, consuming too much Fat – whether from Coconut Oil or other sources – can lead to an increase in weight gain if you consume more than your body needs.

So, now that we’ve taking a quick look at Coconut Oil, let’s see why it might be a good idea to add it to your Coffee.

Why put Coconut Oil in Coffee?

If you’re anything like us, you’re always looking for ways to improve all aspects of your life.

You may have already heard about the Bulletproof Coffee recipe.

In case you didn’t know, the Bulletproof Coffee recipe is normal coffee which is supplemented with 1-2 tablespoons of Unsalted Butter or Ghee, and sometimes other products.

The thinking behind adding Butter to your Coffee is that the fat content could help to slow down the absorption of Caffeine to provide a more consistent energy boost over several hours.

But what about if you want a Vegan friendly alternative to Bulletproof Coffee?

The rise in popularity of products such as Bulletproof Coffee has caused more people to consider putting Coconut Oil in Coffee.

It may sound bizarre at first, but many people choose to add Coconut Oil to their Coffee to help them get the most out of their morning brew.

There are various touted benefits of Coconut Oil in Coffee. They include increased energy levels and a lower risk of energy crashes – although these have not been backed up by studies.

One other touted benefit of consuming Coconut Oil is that it could help to kill harmful microorganisms.

As we mentioned above, Coconut contains Lauric acid, which once digested, also forms a substance called Monolaurin.

It is claimed that both Lauric Acid and Monolaurin can kill harmful pathogens such as bacteria, viruses and fungi.

The main thing to bear in mind when it comes to Coconut Oil Coffee is the high saturated fat content in Coconut Oil.

Due to the high Saturated Fat content, Coconut Oil in Coffee may not be suitable for everyone. It may be better to try it once or twice a week as a treat and a simple boost to your normal Coffee routine.

Putting Coconut Oil in your Coffee is pretty straightforward, but there are a few things to bear in mind.

Firstly, it is generally advised that you don’t add milk or sugar to your Coffee. Instead, stick only to Coconut Oil.

How much Coconut Oil you choose to put into your Coffee is totally up to you.

Step 1: Make your cup of Coffee as you normally would.

Step 2: Then simply stir in the Coconut Oil. It should dissolve quickly and form a nice creamy texture.

Step 3: Enjoy from time to time as part of a healthy and balanced diet!

As Coconut Oil doesn’t have much taste, it shouldn’t change the taste of your Coffee very much. The biggest difference we noted was in the noticeably creamier texture.

Be prepared to moderate the amount of Coconut Oil you use in your coffee. For example, if you prefer Espresso coffee, then it is probably a good idea to use around half a teaspoon of Coconut Oil.

As always, we recommend that you get the basics right before thinking about making any changes to your diet.

That means making sure that you are sticking to a healthy diet, exercising regularly, and getting plenty of rest.

As we mentioned above, Coconut Oil is high in Saturated Fat. For this reason, it is not suitable for everyone. It is also probably best to limit your intake of it.

We strongly recommend speaking to a certified medical professional before thinking about adding Coconut Oil to your diet on a regular basis.

It’s also important to remember that Coffee contains Caffeine, which is a stimulant. For this reason, we don’t recommend consuming any Coffee or Caffeine within eight hours of going to bed, as it could affect your sleep.

So, that brings us to the end of our look at Coconut Oil in Coffee.

We’ve walked you through the basics about Coconut Oil, why it is often added to Coffee, and the potential benefits it could bring.

We’ve also brought you our top Coconut Oil in Coffee recipe if you want to try it out for yourself to see what all the fuss is about.