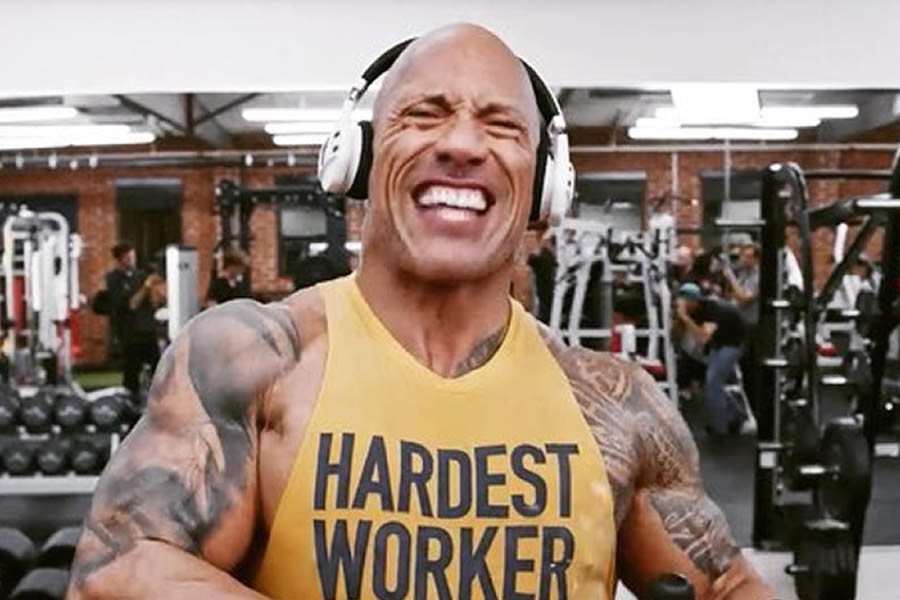 Dwayne Johnson, also known as The Rock, is an American actor, producer, and semi-retired professional wrestler.

He first rose to prominence in the WWE in the 1990s and he has since forged a successful career as an actor.

The Rock has amassed a huge following on social media and at the time writing, he holds the fifth-most followed Instagram account in the world, with more than 138 million followers.

Only Cristiano Ronaldo, Ariana Grande and Selena Gomez have more followers on their individual Instagram accounts.

But where did The Rock’s story start and what can we learn from his journey?

This in-depth Dwayne Johnson biography is going to focus on all of the important things you need to know about The Rock and his impressive story.

We are also going to take a close look at how The Rock promotes an overall healthy lifestyle, and what we can learn from his journey.

So, now that the introductions are out of the way, it’s time to start taking a closer look at Dwayne Johnson’s remarkable story.

Who is Dwayne Johnson?

As we have already mentioned, Dwayne Johnson is an American actor, producer, and semi-retired professional wrestler.

Perhaps you’ve known about The Rock since his wrestling days, or maybe you’ve recently come across him in one of his blockbuster Hollywood movies. 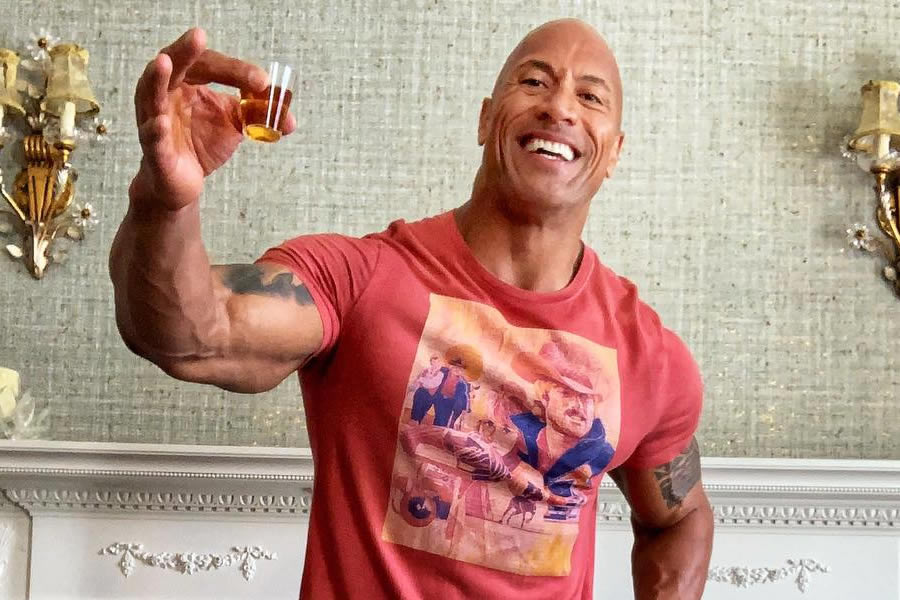 Either way, it’s hard to miss the man. He certainly makes a good impression everywhere he goes.

Let’s take a step backwards in time and focus on where The Rock started his career.

Dwayne Johnson was born on 2 May 1972 in Hayward, California. He briefly lived in New Zealand with his mother’s family in Grey Lynn, before returning to the United States with his parents.

After a brief stint pursuing a career in American Football, Dwayne signed a contract with the World Wrestling Federation (WWF) in 1996. He made his WWF debut as Rocky Maivia, a combination of his father and grandfather’s ring names.

During that period and his rise to wrestling prominence, Dwayne did not acknowledge the Rocky Maivia name, instead referring to himself in the third person as ‘The Rock’. The name clearly stuck.

He enjoyed a wildly successful career in wrestling and he is generally regarded as one of the all-time greatest professional wrestlers.

After deciding to turn away from wrestling, Dwayne opted to pursue a career in acting in Hollywood.

Over the course of several years, The Rock has become one of the highest-paid actors in Hollywood.

He began his career in action films in The Mummy Returns, which was released in 2001.

He is well-known for his role as Luke Hobbs in The Fast and the Furious franchise.

As well as his Hollywood acting career, The Rock has also made a number of appearances in television shows. He is perhaps best known in the world of TV for his role as executive producer and star in HBO comedy-drama series Ballers, which is about NFL players living in Miami, Florida. 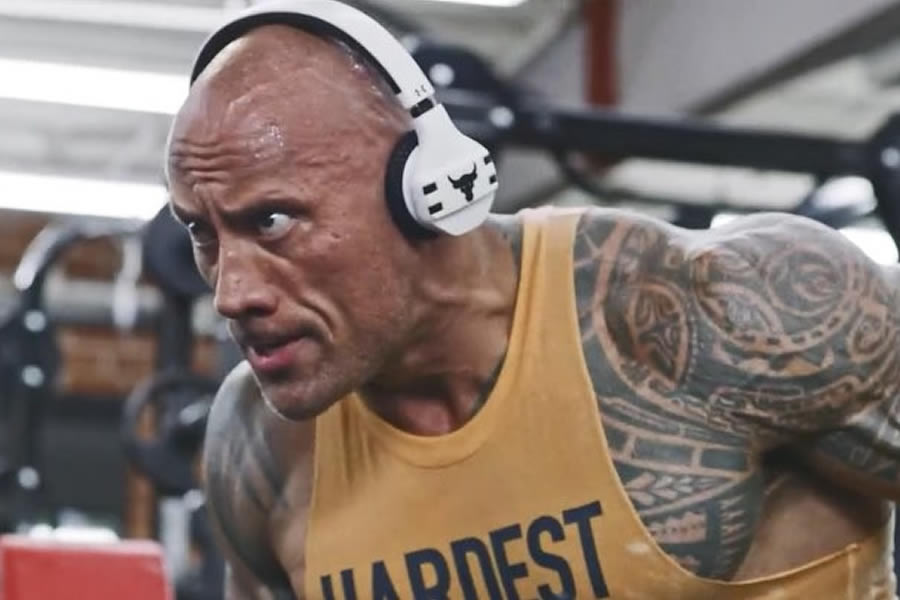 The Rock has shown an impressive knack for entrepreneurship during his glittering career.

In March 2016, he announced a partnership with Under Armour called “Project Rock”, which is a range of fitness apparel.

The first product was a gym bag, which sold out in a couple of days after its initial release. The second item in the range was a black T-Shirt which featured the wrestler’s iconic “brahma bull”, which also sold out quickly.

The Rock also started his own YouTube channel back in 2016 with the help of world-renowned YouTuber and online personality Lilly Singh.

As we mentioned at the start of this biography, The Rock has one of the biggest followings in the world on social media.

He regularly uses his Instagram account to update fans about his whereabouts, and he also often posts clips from his gym workouts.

At the time of writing, The Rock had more than 3.5 million subscribers on YouTube. He has more than 57 million likes on his official Facebook page.

Quite clearly, The Rock’s story is an inspirational one for a lot of reasons.

He has not been afraid to experiment in different industries throughout his career.

But throughout his journey, The Rock has shown an admirable respect for his roots and origins.

His infectious personality has helped him to bag one of the largest followings on social media in the world of any individual.

The Rock has been relentlessly working on his physique throughout his career, and he is constantly keeping fans updated about his workouts on social media.

He often posts clips of him performing sets in the gym with some tips and tricks for his followers.

There is no official figure for The Rock’s net worth, but there are a number of estimates available online.

One figure which is often quoted is that The Rock earned a staggering income of $124 million in 2018. The figure made him the highest-paid actor in the history of the Forbes Celebrity 100 list.

The Rock himself appeared to endorse this estimate, when he reposted a screenshot of a news article from Business Insider quoting the $124m figure.

Given that he reposted the figure on his personal Instagram account, it can be assumed that it is relatively accurate.

In his response to the article, Dwayne wrote on Instagram: “I work extremely hard but never anticipated (in my wildest dreams) I’d become the highest paid actor in Forbes’ history. 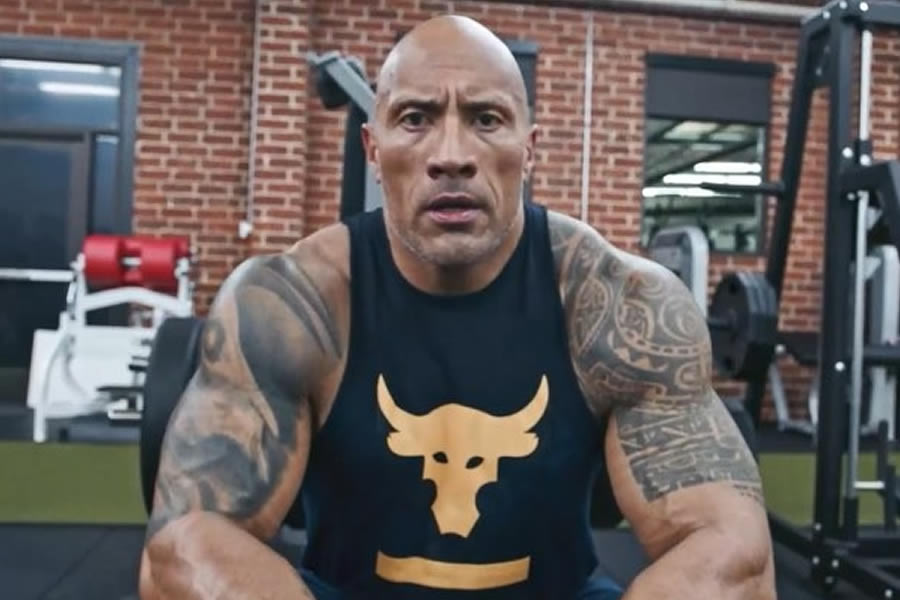 “I don’t have a Harvard MBA, but my business philosophy and acumen has been sharpened over time and thru failure.

“My goal when I was wrestling in flea markets for $40bucks per match (well before the bright lights of the @wwe) is still the exact same goal I have today – ALWAYS put my AUDIENCE FIRST.

“I have one boss – the world. Send you home happy, and I’ve done my job.

“I’m the dude who started w/ $7bucks. I’m grateful to the bone and hungry to the core. #MakingForbesHistory #AudienceFirstPhilosophy #FleaMarketDreams #HardestWorkerInTheRoom.”

It’s worth remembering that the $124m figure is what The Rock is claimed to have earned in 2018, it is not his net worth.

When it comes to the exact figure of The Rock’s net worth, there is no official number.

That being said, Men’s Health magazine, in an article published in July 2017, claimed that Dwayne Johnson’s net worth is likely to be close to $220 million.

Whatever the real number, The Rock deserves to be rewarded for the relentless hard-working attitude he has displayed over the years.

Lots of people are curious of about Dwayne Johnson’s family.

In case you didn’t know, The Rock’s father is a Black Canadian from Nova Scotia and part of the first black tag team champions in WWE history (when it was still known as the WWF) along with Tony Atlas.

The Rock is a regular gym goer and he consistently posts clips from his workouts on social media.

One recent example is when The Rock revealed his Bicep workout secrets in a post shared on Instagram on 3 April 2019. 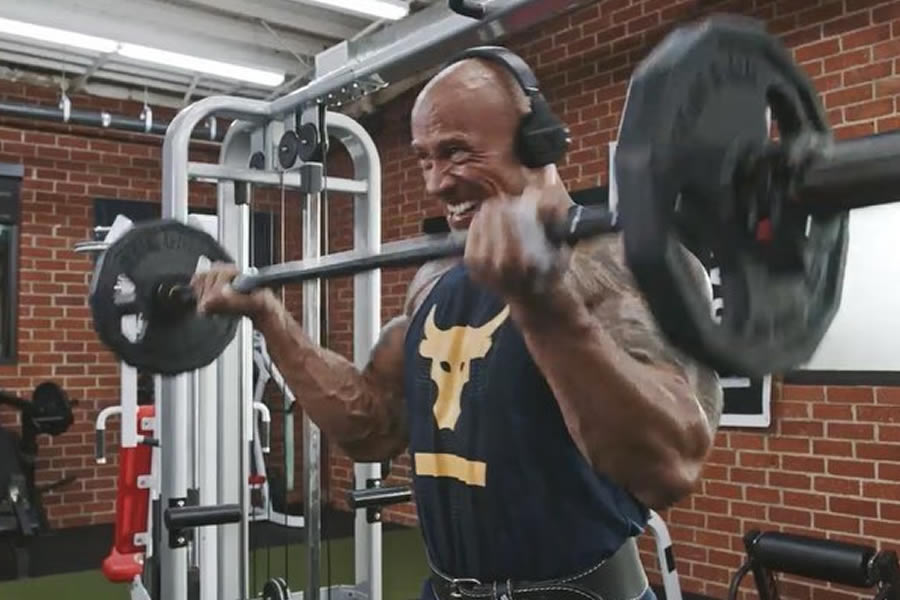 In the video clip, Dwyane shows himself performing the popular Bicep exercise ’21s’.

The Rock said in the caption to that video: “Hellish bicep finisher I love called 21s.

“And pushing past your pain threshold to squeeze out a few more extra reps is where success and magic happens.”

Earlier in 2019, The Rock revealed his workout philosophy with a post on Instagram. He wrote: “I don’t do pretty workouts — l leave that for all the pretty boys.

“My training is intense, nasty, extreme, unapologetic and hardcore. But always fun.

“Remember, it isn’t always about what you do, but rather the spirit in which you do it.

“Train as hard as you can and leave it all in the gym. Period.” 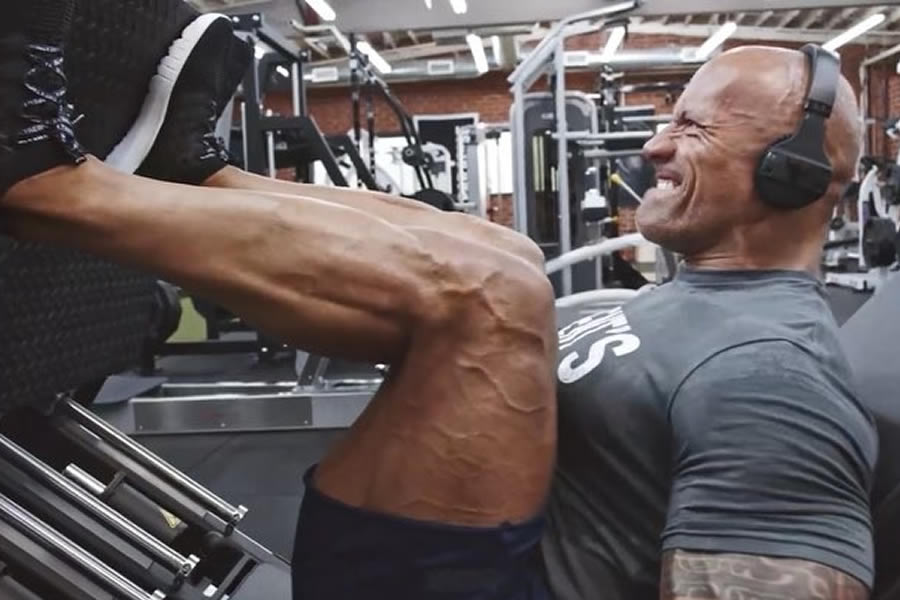 You can check out The Rock’s official Instagram page to see more clips from his workouts.

Many people have noticed that The Rock has some prominent tattoos.

In case you didn’t know, The Rock had a tattoo of a bull on his right bicep since his pro wrestling days.

However, he underwent a ‘tattoo transformation’ on 8 August 2017.

The Rock shared a video of himself in the tattoo chair with artist Nikko Hurtado. 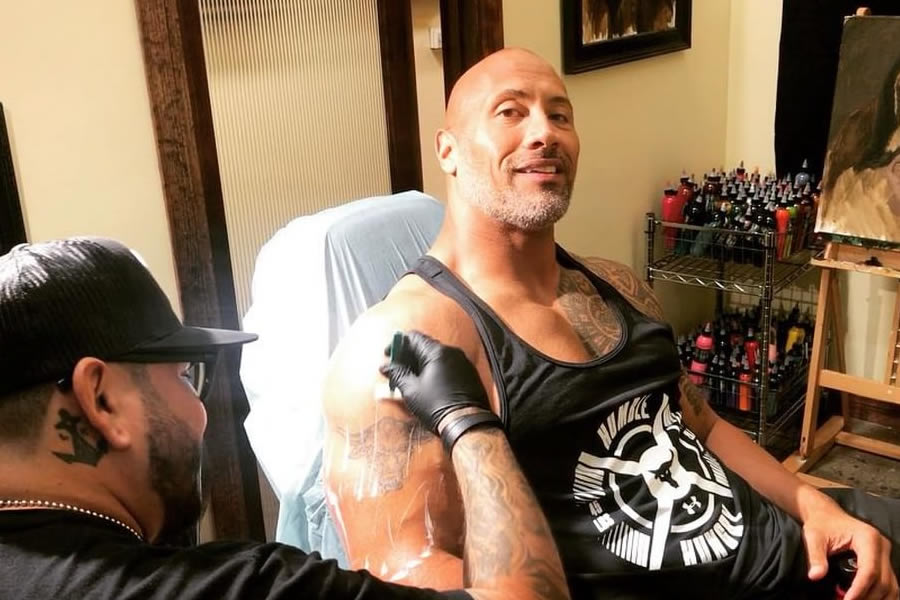 In the video’s caption, he explains: “Evolution of the bull begins w/ @nikkohurtado. I’ve engrained this bull in my DNA for two decades. My core. Humbly, it’s also become a symbol of strength, resilience, heart, power and defiance to so many people around the world.

“I got this tattoo when I was just a kid. Now I need it to reflect me as a man.

“All my ink is a rite of passage and spiritual and the MANA (power and spirit) has to be right before we begin.

“Mana is strong with world renowned Nikko. We talked for hours about the man I am today, compared to who I once was. And who I’ll always be.

“We all desire to grow and evolve. The mana is right.. let the blood and pain begin. #EvolutionOfTheBull #WheresMyVicodin.”

After the tattoo transformation was complete, The Rock shared another post on Instagram, with the before and after shots of his right arm. 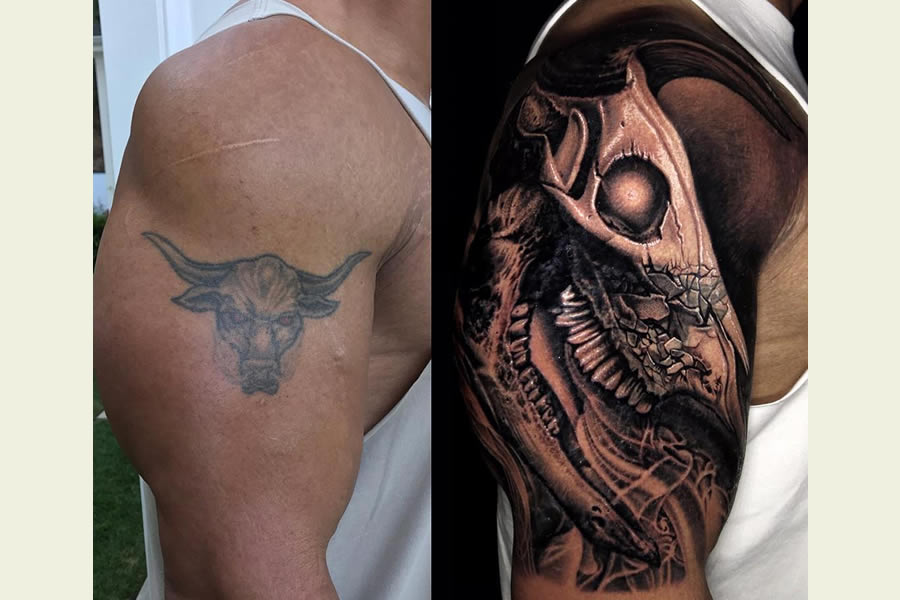 He wrote the caption along with the post: “Evolution of the bull. Blood, sweat and years.

“After three sessions and 22 hours of tattooing with world renowned @NikkoHurtado, the story’s almost done.. Every detail is a reflection of my own personal history.

“From the cracks and heavy damage in the bone representing life’s hard lessons I’ve learned over the years. Just like scars and wrinkles – I’m so grateful to have ’em because they’re earned.

“To the horns, not pointing up or out to the side, but pointing straight ahead representing relentless energy and forward progress.

“The core and anchor of this image is in the eye. Look closely and you’ll find the life, energy, power and you’ll feel the MANA (spirit). The eye tells the story of a disruptive positive energy always ready to dent the universe.

“Depending on the light and angle, sometimes the energy’s subtle and sometimes it’s glaring. But it’s always alive and ready to disrupt the universe and love and protect my family and all things I love with intense passion and gratitude.

“Cheers to living, learning, evolving and growing. And to the positive disrupters ready to dent the universe.”

What Can We Learn From The Rock?

The Rock’s story is an inspirational one.

He has shown that hard graft pays off, and social media has allowed us a glimpse behind the scenes to show just how much he hustled to get to where he is today.

Dwayne has show admirable resilience over the years and he has not been afraid to reinvent himself on a number of occasions.

Importantly, we salute The Rock for the values he promotes. Hard work, respect and dedication to your cause.

We could all do a lot worse than follow Dwayne’s example.

Quite clearly, The Rock deserves huge credit for the success he has enjoyed over the years.

He has been a hard grinder behind the scenes and is clearly not afraid of hard work.

Importantly, he has kept a grounded respect for his roots throughout his career, and it is no surprise that some people are touting The Rock as a future president of the United States of America.