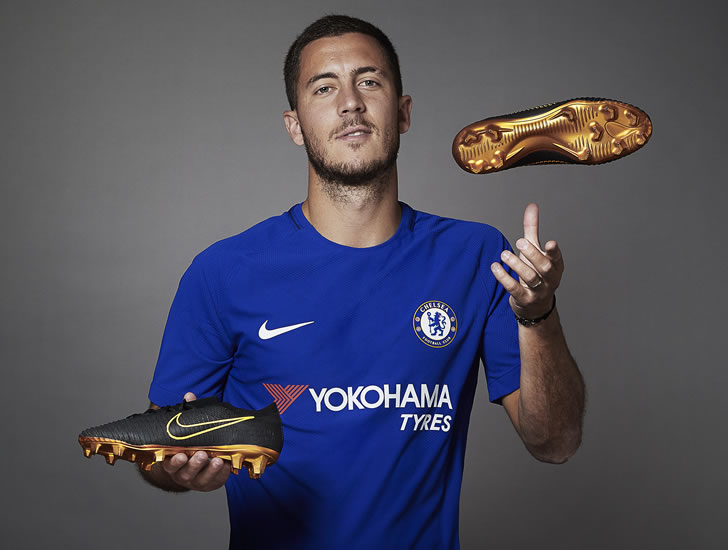 Eden Hazard is a Belgian professional footballer who currently plays for Real Madrid in Spain.

The attacker is widely regarded as one of Europe’s top players and he has enjoyed a lot of success in his career so far.

Like most footballers, Hazard has been through some highs and lows throughout his career.

Hazard is a household name and is one of world football’s most famous stars. But how much do you really know about the Belgian attacker?

Eden Hazard was born on 7 January 1991 in La Louvière, Belgium, and grew up in Braine-le-Comte.

It is fair to say that football runs in the blood in the Hazard family. Both his mother and father were footballers and he has three younger brothers who also play football – Thorgan, Kylian and Ethan. 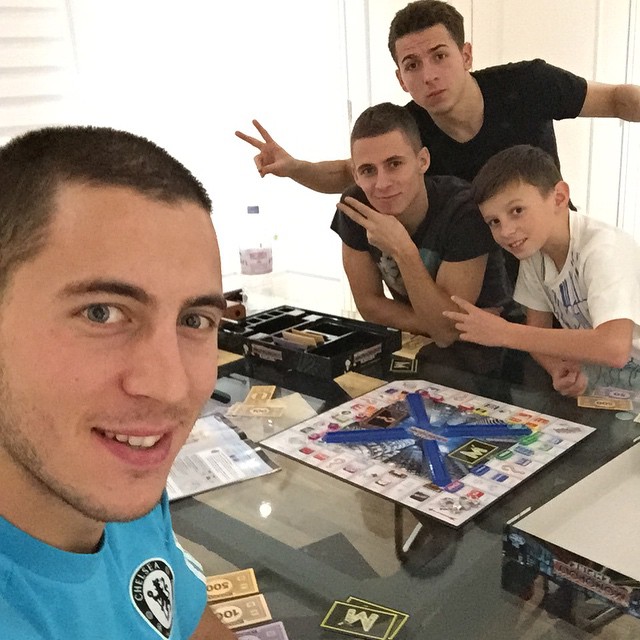 Starting out at Lille

After impressing the local coaches, Hazard moved to Belgian club Tubize in 2003. It was there where he caught the attention of Lille scouts and he was offered a youth contract with the Belgian side.

Hazard’s father decided to let the young footballer move to France to continue his development after quickly realising that the facilities for younger players are not as strong in Belgium.

Hazard quickly rose up through the ranks at Lille and was promoted to the French club’s reserve team at the age of 16 in the 2007-08 campaign.

He made his full professional debut for Lille back on 24 November 2007 when he came on as a substitute in the league game against Nancy in the 78th minute.

Hazard enjoyed plenty of success after breaking into the first team at Lille, winning the Ligue 1 title in the 2010-11 season and the Coupe De France in 2010–11.

Stepping up at Chelsea

After months of speculation about his future in the months leading up to his exit from Lille, Hazard was finally confirmed as a Chelsea player on 4 June 2012.

The fee was undisclosed but various media outlets reported to be around £32m.

The transfer came after Hazard posted a message on Twitter, confirming Chelsea as his destination following the Blues’ Champions League triumph in the season which had just finished. 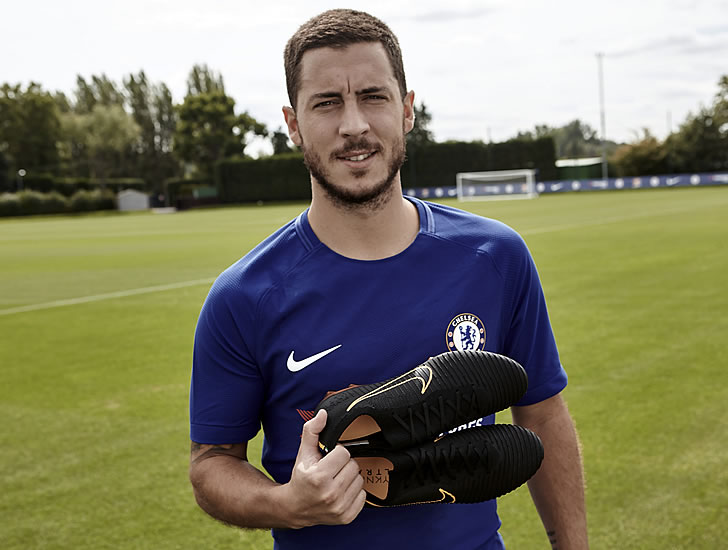 Manchester United were also thought to be interested in signing Hazard but the player himself admitted that he was swayed by Chelsea’s Champions League triumph under Roberto Di Matteo in the 2011-12 season.

“When they won the Champions League I told myself, ‘Why not Chelsea?’ There was a struggle between Chelsea and Manchester United but, for me, Chelsea has the best project. It’s a wonderful club.”

Hazard took the number 17 shirt following his transfer and made his competitive debut for the Blues when he featured during the Community Shield defeat by Manchester City at the start of the season.

Hazard made his Premier League debut for Chelsea in August 2012 when he played for the Blues during the 2-0 win over Wigan Athletic at the DW Stadium.

He scored his first ever goal for Chelsea during the 2-0 win over Newcastle United back on 25 August 2012, when he converted his penalty in front of the home crowd at Stamford Bridge to add to Fernando Torres’ strike.

“Out of all the clubs who were interested, I got the feeling that, deep down, Chelsea showed that they really wanted me. There were lots of reasons I came to Chelsea. They showed a real desire to get me to come here. I didn’t have to think about it too much.”

The midfielder then made his Champions League debut for the Blues when they took on Juventus in their group stage opener in September 2012.

Hazard has enjoyed much success at Chelsea since joining the west London club. 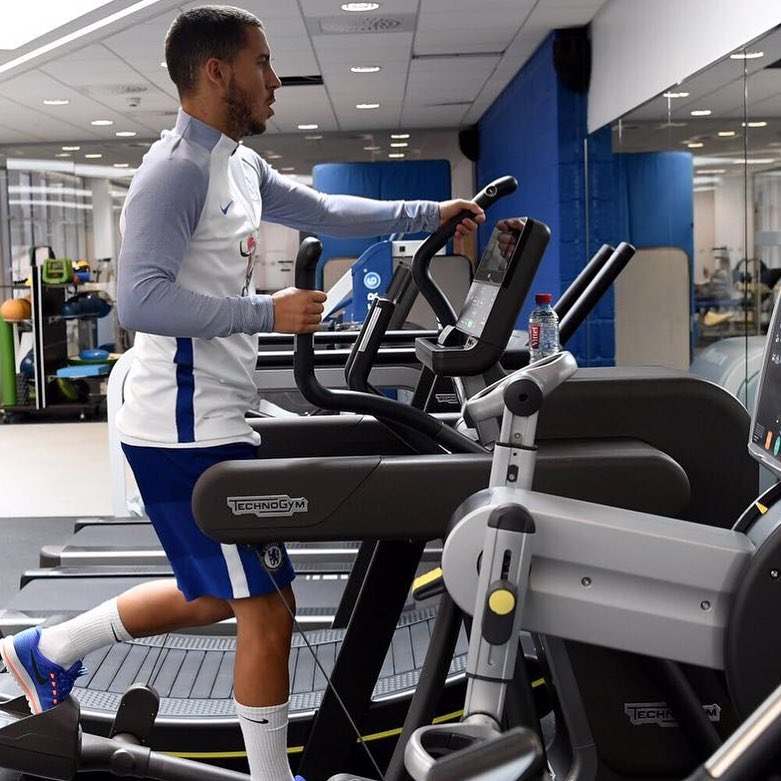 He has twice won the Premier League title and has also won the Europa League and English League Cup with the west London club.

“I love to set up my team-mates. I am not here to be a star, to show off. I am here to play for the others, but if I have to try and clinch a game, then I will.”

Hazard signed for Real Madrid from Chelsea FC in the summer of 2019 after months of speculation linking him with a move to the Berbabeu.

At the time, it was estimated that the fee for the transfer could end up exceeding £150m.

Hazard made a number of appearances for Belgium’s youth teams, at both Under-17 and Under-19 level.

He was called up to the Belgian senior team for the first time while he was still at Lille back in November 2008. 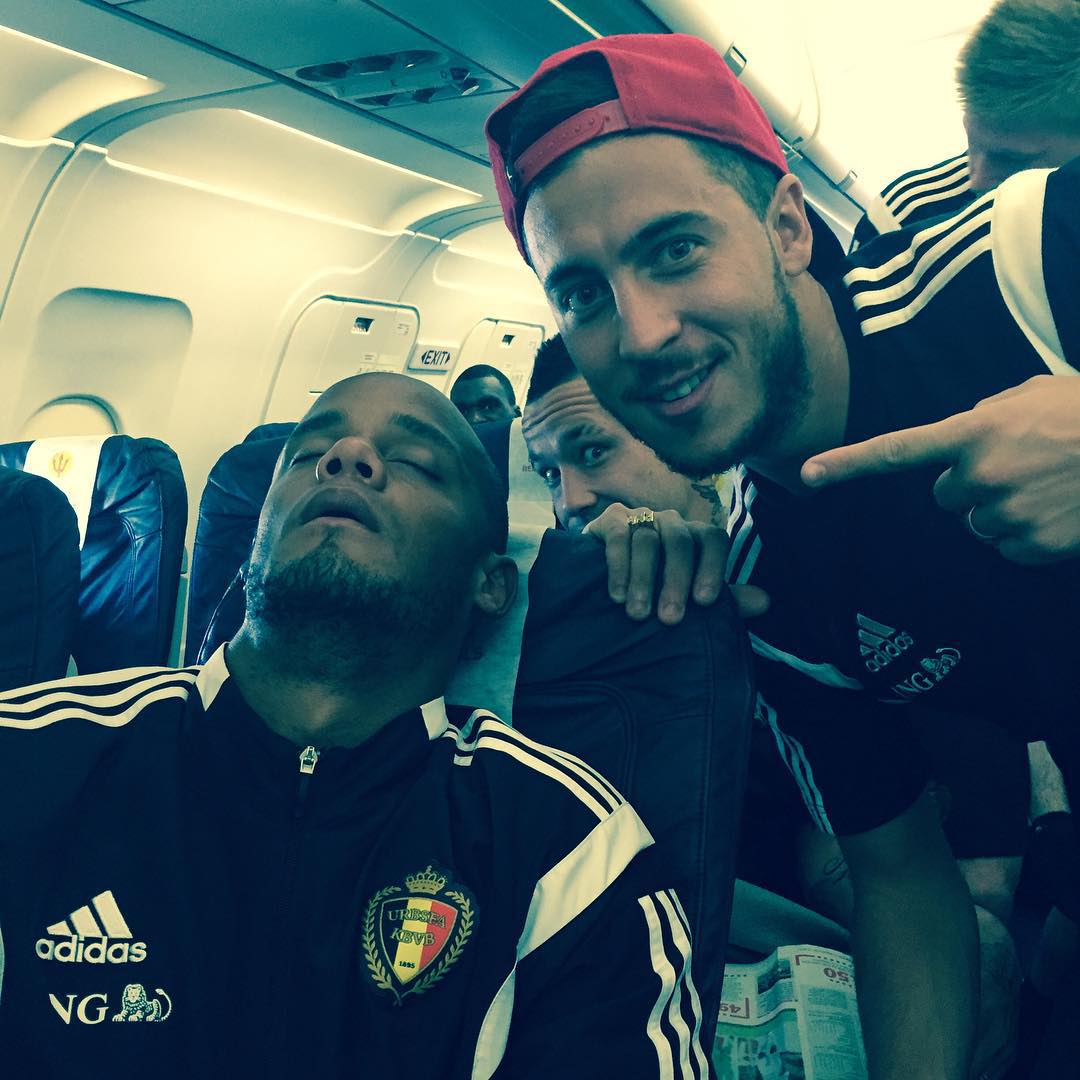 Hazard made his senior international debut for Belgium in November 2008, aged 17 years old.

He scored his first senior goal for the Belgian national team 7 October 2011, nearly three years after his debut, in a 4–1 win over Kazakstan.

Hazard captained Belgium at Euro 2016 after regular skipper Vincent Kompany missed out due to injury.

Like most elite athletes these days, Hazard is likely to follow a strict diet, although the exact details of his nutrition plan are not known.

Hazard was famously given a three-game ban by then-Belgium manager Georges Leekens for eating a burger while a game he had been substituted in was still going on.

A typical diet of a Premier League footballer is usually high in carbohydrates from foods such as pasta and rice. And Hazard himself admits that he is a good cook when it comes to the classic Italian dish.

“I love cooking. There is nothing I like better than going home and cooking my family a nice meal. Anything with pasta! Pasta with butter! I have a good repertoire and I can do quite a few different dishes. Sometimes they work out and sometimes not. Obviously we are also well known for beer in Belgium. But I’m a footballer. I don’t drink beer.”

Life away from the pitch

Hazard appears to lead a fairly quiet life away from football. He is married to Natacha Van Honacker and the couple have three sons together – Yannis (born 2010), Leo (born 2013) and Samy (born 2015).

The Belgian attacker showed off his new tattoo on social media for his followers in February 2017, posing for a picture at the Fulham Tattoo Centre after getting a half-sleeve tattoo.

The tattoo is on his right arm and was the “first of many”, according to the Fulham Tattoo Centre’s post on social media back at the time. 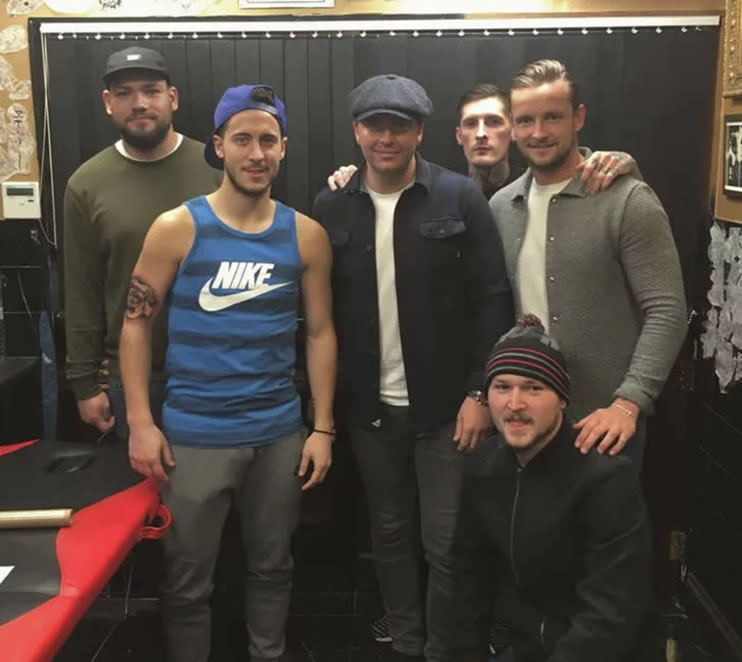 Eden Hazard got a tattoo on his right arm in 2017 (Photo: Fulham Tattoo Centre / Instagram)

Hazard has regularly referred to Chelsea and Ivory Coast legend Didier Drogba as one of his idols.

The pair played together at Chelsea in the 2014-15 season as they won the EFL Cup and Premier League title under Jose Mourinho.

“I grew up watching Didier Drogba play and he was a huge idol of mine. I signed for Chelsea just after he left so I was a little bit sad that I was arriving as he was leaving, but two years later he came back. I’m so happy I can tell my kids that I played with him, even if it was just one season. He’s a great guy, a great leader and you always learn from the best in football. He was such a big-game player and I still speak to him.” 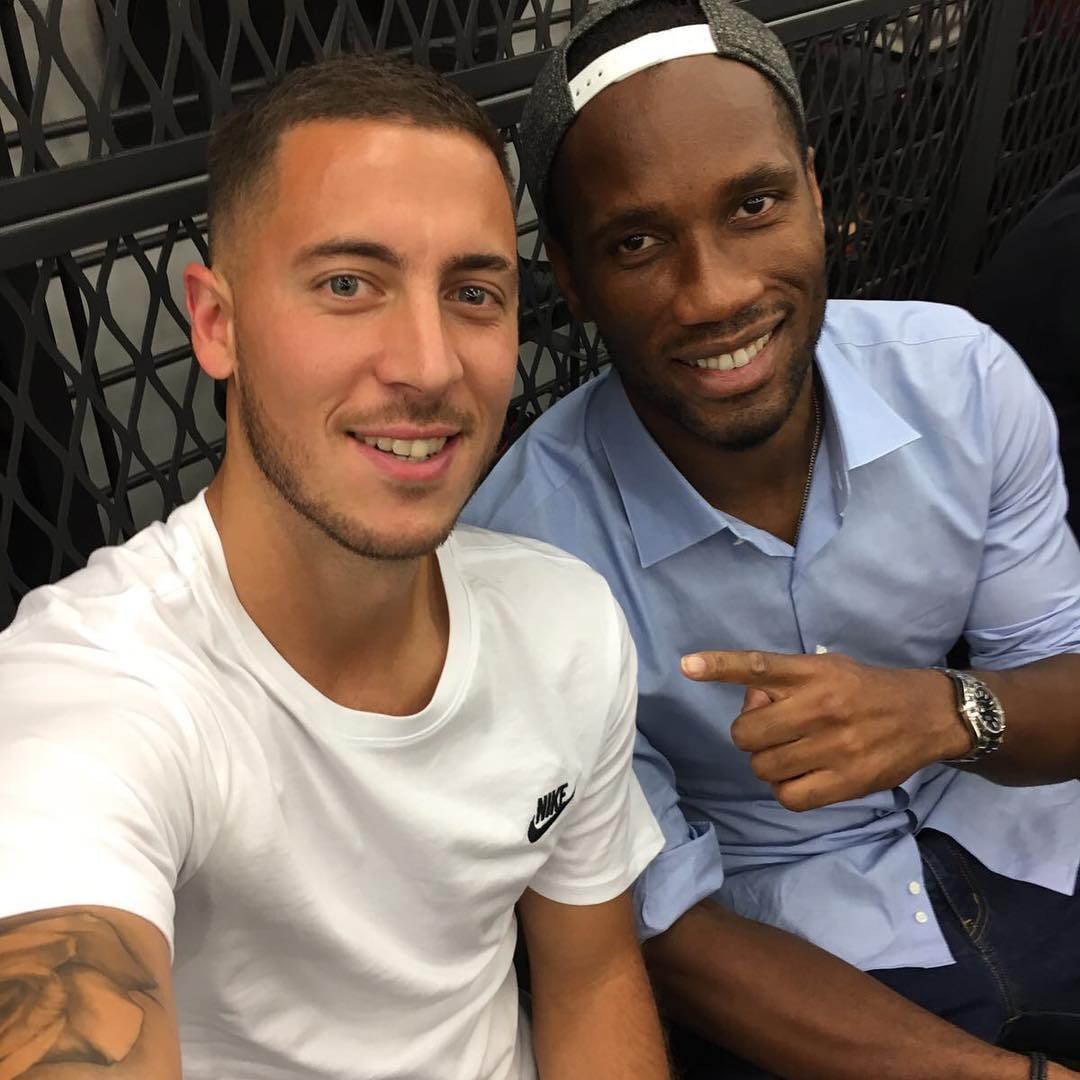 Hazard has also spoken about Real Madrid and France legend Zinedine Zidane as one of his main role models as youngster.

His comments about the Real Madrid manager sparked speculation that he may be interested in a move to the Spanish club in the summer of 2017.

“Everyone knows Zidane was my role model; we play a different style, but if I can compare to him then it is a great honour for me. I watched him so much when I was younger, almost every game I could. He is my favourite player, for sure.”

What we can learn from Eden Hazard

Hazard has worked hard to become one of the best attacking footballers on the planet.

He has combined a potent natural ability with a tireless desire to work on improving his own game from a young age.

Like most footballers who make it at the very top level, Hazard has shown incredible commitment to his game and improving over the years.

He has also shown the ability to be able to bounce back from significant adversity, after Chelsea’s doomed season in the 2015-16 campaign, when they ended up trophyless and in 10th place in the Premier League. He helped Chelsea win the Premier League in the season after under new boss Antonio Conte.

Since then, he has been stepping up to the plate at Real Madrid.

Hazard’s story shows that when you combine natural talent with a burning desire to succeed and a healthy work ethic, success is inevitable.