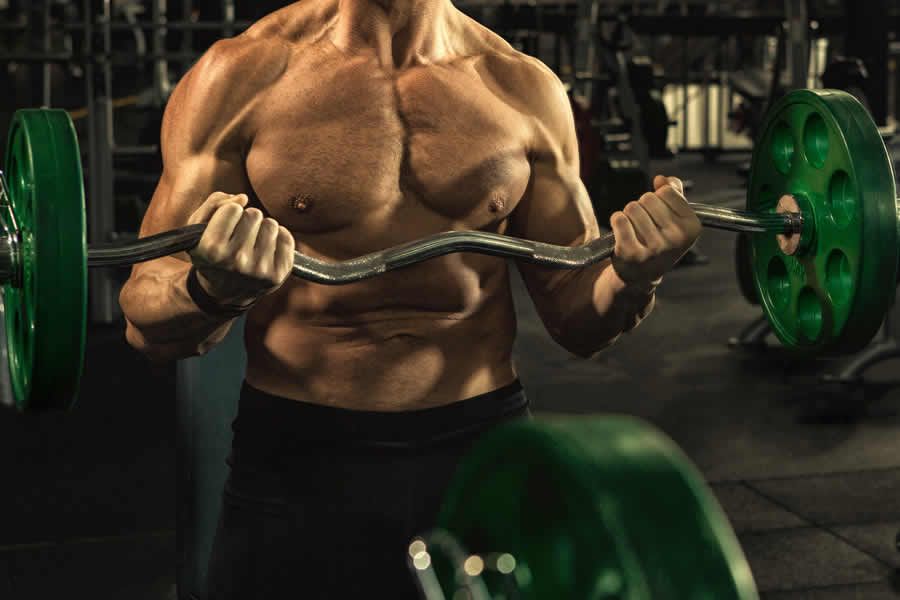 Weight-lifting is a great way to build strength and muscle as you look to hit your fitness goals – but there are a lot of things to bear in mind for beginners.

For example, two popular exercises – the bench press and bicep curls, often use bars which carry significant weight themselves.

It’s important to know the weight of the bar that you’re using so you can track your progress over a sustained period of weeks and months. Consistency is key when it comes to the equipement you use.

In this article, we’re going to take a detailed look at both the standard Bench Press Bar and the EZ Curl Bar to see exactly where these two vital pieces of equipement stand in terms of weight and size.

We’re also going to take a look at some of the popular exercises that are performed with these bars.

We’re going to split this guide up into the following sections:

So, with the introductions out of the way, let’s start taking a closer look at the EZ Curl Bar and Bench Press Bar in a bit more detail.

What is an EZ Curl Bar? 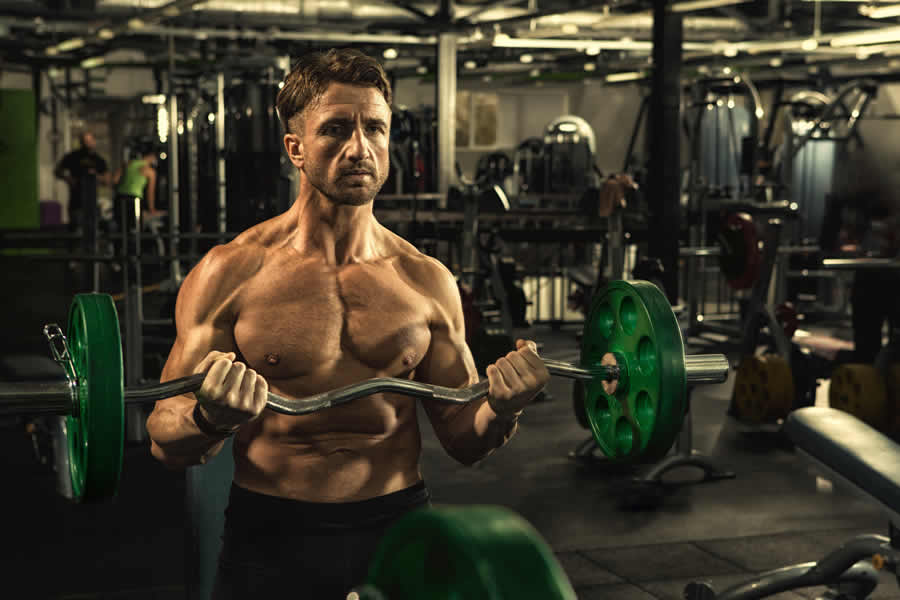 If you’ve landed on this article, the chances are that you already know what an EZ Curl Bar is, but let’s cover the basics anyway.

You’ll almost certainly have seen EZ Bars in use before at the gym, if you haven’t already used one yourself.

In case you didn’t know, EZ Curl Bars, or just EZ Bars, are regular barbells which use a slight ‘W’ bent shape, rather than being just a straight bar.

They are particularly useful when it comes to performing exercises such as bicep curls, because they allow you to keep your wrists in a slightly more neutral position.

Using a standard barbell for exercises such as the bench press is usually OK, because your wrists simply go underneath the bar.

But it gets a little bit more complicated when curls are involved, as using a straight bar can place more stress on your wrists.

The main drawback of using an EZ bar for Bicep curls, for example, is that the shape means that it prevents you from being able to compete a 100% contraction of the biceps.

So, now that we’ve covered the basics when it comes to EZ Curl Bars, let’s now take a look to see how much they usually weigh.

EZ Curl Bars vary a little bit in weight, but they usually fit into a range.

A typical EZ Bar is also usually around 120cm or 47 inches in width, although some may be up to 132cm or 52 inches long.

It’s always a good idea to know the weight of the equipment you use on a regular basis, so you can track your progress and ensure that you stay consistent.

It’s also useful if, for example, you change gyms or are travelling for some time, as knowing the weight of the bars means that you can stay consistent with your progress even if you’re in a new gym.

What is a Bench Press Bar? 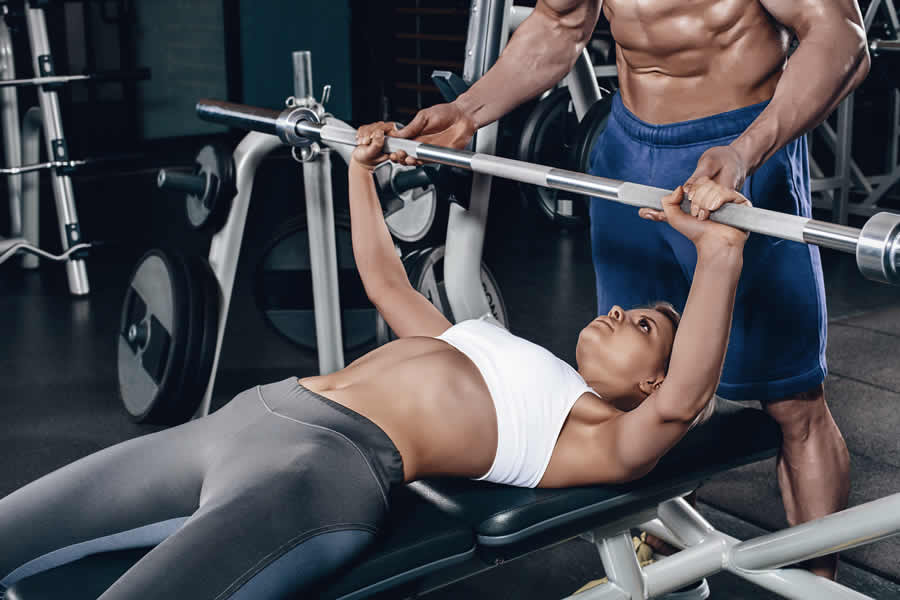 So, now it’s time to move on to the old tried-and-trusted Bench Press Bar.

Also known as the standard barbell, this is one of the most popular pieces of equipement in most gyms.

Olympic Barbells are used for a number of different exercises, ranging from the Bench Press, to Deadlifts and Squats.

The bar is made so that weights can be added to each end and locked on securely to step up the resistance.

If you do choose to add weight plates to your bar, it’s important to make sure that it is even on both sides, and that the weight plates are locked into place securely.

So, now that we’ve taken a closer look at Bench Press Bars, it’s time to find out how much they weigh.

Bench Press Bars may vary a little bit in weight, but generally speaking they do fit into one main range.

A standard Olympic Barbell (also known as the Bench Press Bar) weighs 20.4kg or 45 pounds. Remember that adding locks or weight plates to the bar will increase the overall total weight.

A standard Olympic Barbell is usually around 213cm or seven feet in width.

As always, it’s important to know the weight of the equipment you’re using, as if you switch gyms, it means you can be consistent with your weight training.

It’s also worth noting that when somebody says that they can bench press 80kg – they are usually including the weight of the bar in that. So bench pressing 80kg would actually be an Olympic Barbell with added weight of 60kg (30kg plates on each side).

Now it’s time to take a closer look at some of the most common exercises performed with Bench Press Bars and EZ Curl Bars.

As we mentioned above, the Olympic Barbell is one of the most commonly used pieces of equipement in most gyms.

Some of the popular exercises performed with an Olympic Barbell include:

Of course, there are many more than this, but these are some of the basics and some of the ones you will have seen people performing regularly at your gym.

So, what about the EZ Curl Bar?

Some of the popular exercises performed with an EZ Curl Bar include:

Again, there is lots more that you can do with an EZ Bar, but the above are just some of the most common ones.

EZ Bars are particularly useful if space is at a premium, as they are much smaller in width than an Olympic Barbell.

It’s always a good idea to find out how much the equipment you’re using weighs, as it will make it easier to keep track of your progress.

It goes without saying, but if you are consistently training with the same equipment, then you’ll be able to know exactly how much you are lifting during each session.

If you’re not sure how much your EZ Bar or Olympic Barbell weighs – and there are no scales in sight – then it may be worth asking one of the gym staff, so you can take the weight of the bar into account for future sessions.

As always, you should speak to a certified professional before thinking about making any changes to your workout routine or diet.

So, that brings us to the end of our look at the EZ Curl Bar and Bench Press Weight in KG and Pounds.

We’ve taken a close look at both of these pieces of equipement to see what they’re used for and why they are so popular.

We’ve also looked in detail at how much EZ Bars and Bench Press Bars weight, so you can take this into account during your workouts.

Remember, it’s always a good idea to stick to using the same weight of equipement bars consistently, because it means that you will be better able to track your progress over long periods of time.