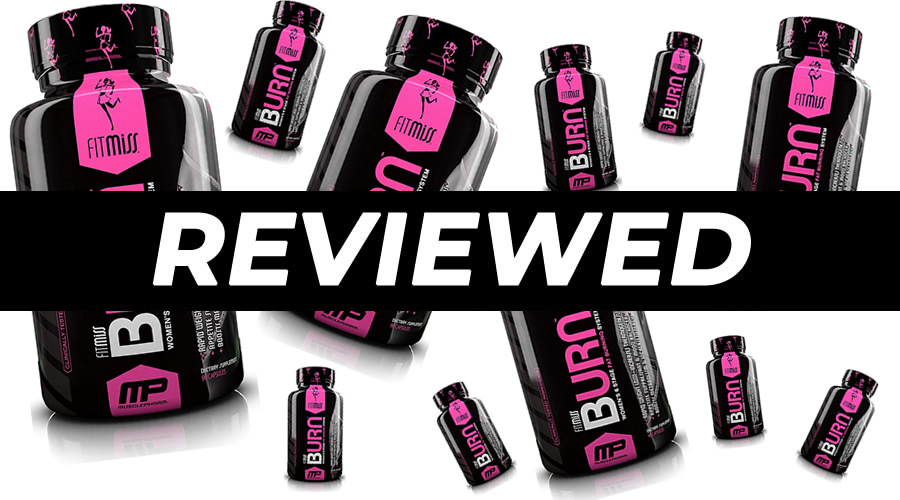 We’re always looking to find out more about the latest supplements to hit the market, so we were keen to learn about FitMiss Burn.

It’s a so-called ‘fat burner’ supplement which, as the name suggests, has been specifically targeted towards women.

It’s always interesting to come across supplements which have been specifically formulated for women, as most of the products on the market in this category are either aimed at men or marketed towards both sexes.

For whatever reason, the market has been dominated by male-targeted products for the last few years, but recently there have been more and more female-focused supplements emerging.

FitMiss Burn is one of the most popular female supplements on Amazon at the moment, so we’re going to have a look to see whether it can live up to the hype or not.

The purpose of this Fitmiss Burn review is for us to take a close look at this supplement from all of the important angles, so we can determine whether it’s a fat burner worth trying, or whether your money would be better spent elsewhere.

So, let’s now get this review under way by looking at some of the basic facts behind this particular supplement made by FitMiss.

As promised, it’s now time to take a closer look at FitMiss Burn and the basic facts surrounding this supplement.

In case you didn’t already know, the FitMiss range is part of the MusclePharm brand.

MusclePharm are one of the most well-known names in the health and fitness supplements industry, and their products are on sale at a number of online outlets, including bodybuilding.com and Amazon.

FitMiss Burn claims to be a “six stage” system for women.

According to the official product listing on Amazon, this supplement will work in multiple ways to help support your goals.

It’s good that this FitMiss product has been specifically formulated to work in multiple ways to help achieve its effects.

The best supplements on the market work in multiple ways to help boost your results, which is why a multi-action product is always likely to be more effective.

The official marketing material of FitMiss Burn says that this product uses a “revolutionary” six stage approach to help tackle the problem.

We’ve not come across a supplement that claims to have a six-pronged attack when it comes to its claims, so it’s going to be interesting to see whether this product can live up to its own hype or not.

The real proof will be in whether the ingredients used in FitMiss Burn are actually proven to work or not, so let’s now take a close look at the formula to judge whether this product is likely to be effective or not.

Let’s begin this all-important part by taking a close look at the actual ingredients list of FitMiss Burn, as per the actual label on the bottle: 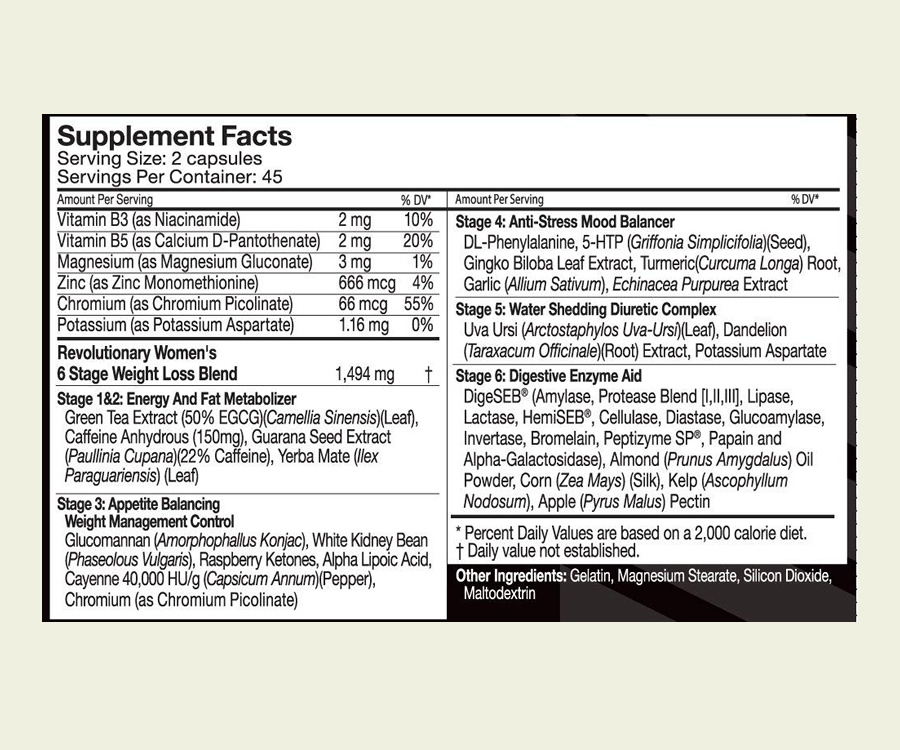 It’s pretty disappointing that the manufacturer has chosen to use a proprietary blend with this product. It means that we don’t know that actual doses of the individual ingredients, and instead we only know the total amount of the overall ‘blend’.

We always recommend that you stay away from supplements that use proprietary blends, because it means that you literally do not know how much of each ingredient is being used in each serving.

This makes it really difficult to judge the effectiveness of the product, and in our opinion, undermines the overall trustworthiness of the supplement.

FitMiss Burn uses a crazy number of ingredients – 34 in total!

With that out of the way, let’s take a look at some of the main ingredients used in FitMiss Burn.

• Chromium – This is a good addition to a supplement, and it’s one of the few ingredients that isn’t part of the proprietary blend. That means that we know the dose, at least. Chromium is a mineral that your body needs in trace amounts to function properly. Among its other functions, it helps to contribute towards normal metabolism of macronutrients.

• Caffeine Anhydrous – Caffeine is a solid ingredient for any supplement in this category. You probably already know all about the benefits of this product. Thankfully, FitMiss have opted to reveal the dose of Caffeine per serving (150mg), even though it’s part of the proprietary blend. This is a good inclusion in the FitMiss Burn formula.

• Dandelion Extract – You’re probably already familiar with the Dandelion flower. We’ve found this ingredient in a number of the supplements we’ve reviewed recently, even though we’re not too sure about it as an effective addition. We simply think that something more useful and proven could have been used in its place.

• Raspberry Ketones – This is one of the ingredients in market leading female supplement Leanbean. It’s an extract which comes from the skin of raspberries and has been linked to a number of benefits.

• Guarana – This is another stimulant to go alongside the Caffeine already in FitMiss Burn. If you already know about supplement side effects, you’ll know that too many stimulants can cause problems such as energy crashes or the jitters. We don’t think that there’s much point including both Guarana and Caffeine in the same supplement, and doing so is only going to increase the chances of experiencing unwanted side effects.

• Kelp – Kelp is a good source of iodine, which can possibly have some benefits. However, there’s really not much evidence linking it directly to the primary purpose of this product. For that reason, it’s likely to be a pretty ineffective ingredient in FitMiss Burn.

Despite Fitmuss Burn using an exhaustive ingredients list, there were quite a few things missing from this product in our humble opinion.

Here are the main three omissions:

Black Pepper Extract is also a good inclusion which usually finds its way into the very best products in this category.

Turmeric is another one of our top rated ingredients, especially for a female-targeted product.

You can see our pick of the leading five supplements on the market right now by visiting the link shown below.

With it being such a well-advertised product, we found loads of Fitmiss Burn reviews on sites such as Amazon and bodybuilding.com.

At the time of writing, there were more than 500 Fitmiss Burn reviews on Amazon, and it had an average rating of 3.2 out of 5 stars.

One person said that FitMiss Burn helped them to feel less ‘bloated’, although they did say that they had trouble swallowing the capsules.

There were naturally also some negative reviews. One person said that they noticed no changes in appetite or weight loss while using FitMiss Burn.

Someone else complained that the product gave them nasty stomach cramps.

As we touched on above, the most common problem when it comes to side effects from supplements like this is the overuse of stimulants such as Caffeine.

Each two-capsule serving of FitMiss Burn uses 150mg of Caffeine, which is a sensible amount and shouldn’t really cause any problems.

That being said, it’s also combined with some Guarana, which is another stimulant, and this time we don’t know the dose used because of the proprietary blend.

Too much Caffeine can cause side effects such as the jitters, energy crashes, and increased anxiety.

Quite frankly, Fitmiss Burn contains way too many ingredients in our opinion. It makes it really difficult to keep track of any potential side effects, especially when we don’t know the doses of most of the ingredients.

We do always recommend that you do some of your own research into the ingredients and speak to your doctor before taking a new supplement for the first time.

Not really. FitMiss Burn does contain a few decent ingredients, and it seems to be a popular product, but the fact that it uses a proprietary blend means that most of the substances are likely to be under-dosed.

Do remember to check out our updated guide to the leading supplements on the market right now via the link shown below.

As we’ve said many times before, you should never expect a supplement to do all of the hard work for you.

You should always make sure that you’re training hard and eating correctly before thinking about adding a fat burner to your regimen.

That being said, if you are already training hard, eating right and getting plenty of rest, then adding a high quality supplement to your regimen can indeed make a big difference to your results.

That brings us to the conclusion of our FitMiss Burn review.

Overall, we were quite disappointed by this female focused supplement, mainly because it uses a proprietary blend and contains way too many ingredients.

Simply put, there are some much better options on the market right now, if you’re looking for a quality female targeted supplement.