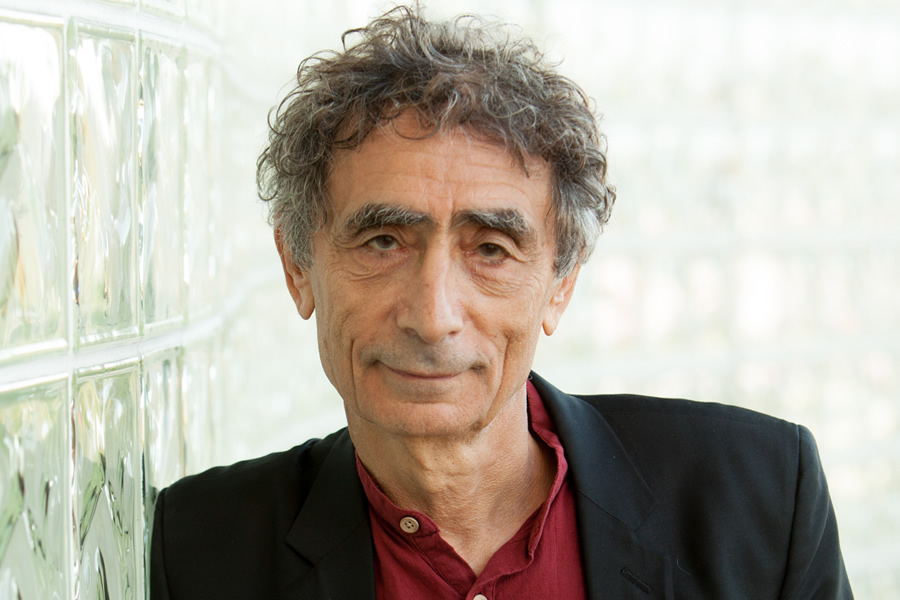 Gabor Maté is a retired Hungarian-born Canadian physician with a background in family practice and a special interest in childhood development and trauma.

Since having retired from being a physician, Gabor speaks extensively on a range of topics important to him, including addiction and both physical and mental health.

He has written a number of books on a range of topics, ranging from addiction to ADHD and mind-body health.

Gabor is now a highly sought-after speaker due to his expertise in a range of important topics.

But how much do we know about Gabor and what can we learn from his journey?

This in-depth Gabor Maté biography is going to focus on all of the key and important things you need to know about him and what we can take away from his viewpoints.

Who Is Gabor Mate?

Gabor Maté is a retired physician, who now is regarded as a specialist and renowned speaker on a number of subjects, such as addiction and mind-body health.

He is highly sought-after for his expertise on a range of topics including addiction, stress and childhood development.

Gabor was born in Budapest, Hungary on 6 January 1944. His maternal grandparents were killed in Auschwitz when he was five months old, his aunt disappeared during the war, and his father endured forced labour at the hands of the Nazis.

He then emigrated to Canada with his family in 1956.

Gabor regularly speaks about how the stressful circumstances of his upbringing contributed to some of his personal struggles later in life.

“I was born to Jewish parents in 1944 just before the Germans occupied Hungary,” Gabor says in his TEDx talk in October 2012. 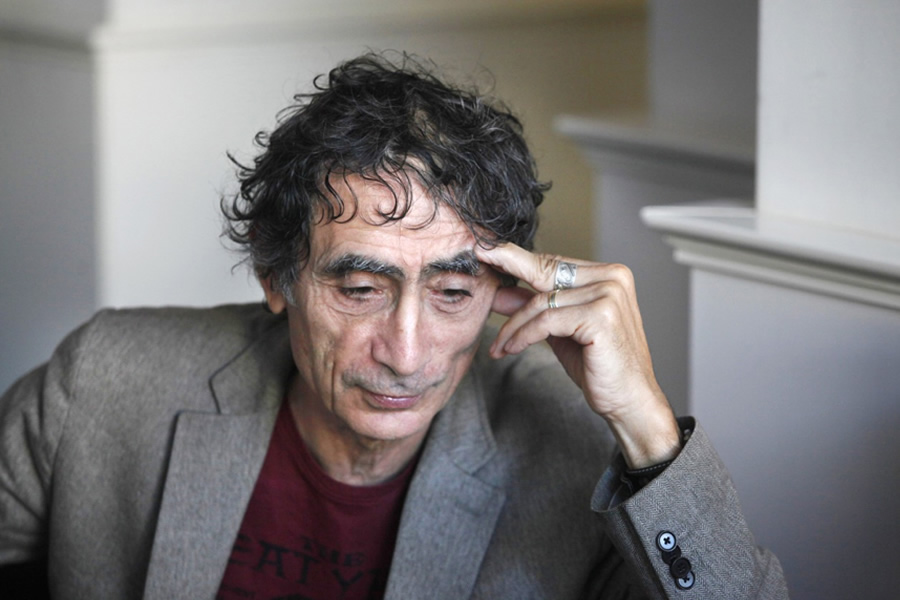 “What do babies know about Hitler or Genocide or War? Nothing. What we were picking up on is the stresses and terrors of our mothers – and that actually shapes the child’s brain.

“What happens is I get the message that the world doesn’t want me. My mother is not happy around me, so she must not want me.

“Why did I become a workaholic later? Because if they don’t want me, at least they are going to need me. Now I’ll be an important doctor. That way, I can make up for the feeling of not being wanted in the first place.”

He is famous for his talks and seminars, which address health professionals, educators, and lay audiences throughout North America and worldwide.

Gabor has written several bestselling books, including In the Realm of Hungry Ghosts: Close Encounters with Addiction, When the Body Says No: The Cost of Hidden Stress, and Scattered Minds: A New Look at the Origins and Healing of Attention Deficit Disorder.

He also co-authored Hold on to Your Kids: Why Parents Need to Matter More Than Peers, with developmental psychologist Gordon Neufeld.

His book on addiction In the Realm of Hungry Ghosts received the Hubert Evans Prize for literary non-fiction. He has also been awarded the Order of Canada, his country’s highest civilian distinction, and the Civic Merit Award from his hometown, Vancouver.

Gabor has made a number of media appearances over the years and is a regular guest on podcasts.

He was a guest on The Tim Ferris Show podcast in February 2018, and he also appeared on Russell Brand’s Under The Skin podcast in October 2018.

One of the recurring themes in Gabor’s work is the view that patients should be encouraged to explore their childhoods and the impact it has had on their adult behaviors over time. 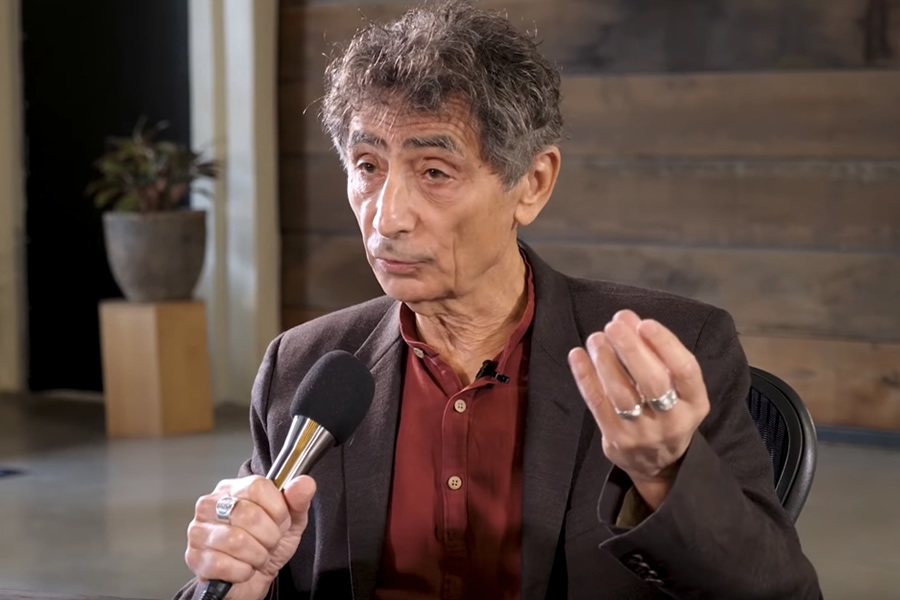 Quite clearly, Gabor is one of the most-respected names in the fields of childhood development and emotional trauma.

If you have listened to any interviews with Gabor or attended one of his workshops, you will already be familiar with the impressive way he is often able to cut through people’s suffering and get to what seems to be the root of it impressively quickly.

Gabor Maté has given a number of talks over the years, and he has some great quotes which can help to summarize his viewpoints on important issues. Here are some of our favorites:

“The attempt to escape from pain, is what creates more pain.”

“[The question] is not why the addiction, but why the pain?”

“It is impossible to understand addiction without asking what relief the addict finds, or hopes to find, in the drug or the addictive behaviour.”

“Medical thinking usually sees stress as highly disturbing but isolated events such as, for example, sudden unemployment, a marriage breakup, or the death of a loved one. These major events are potent sources of stress for many, but there are chronic daily stresses in people’s lives that are more insidious and more harmful in their long-term biological consequences. Internally generated stresses take their toll without in any way seeming out of the ordinary.”

“When I am sharply judgmental of any other person, it’s because I sense or see reflected in them some aspect of myself that I don’t want to acknowledge.”

“The research literature has identified three factors that universally lead to stress: uncertainty, the lack of information and the loss of control.”

“What we call the personality is often a jumble of genuine traits and adopted coping styles that do not reflect our true self at all – but the loss of it.”

“A hurt is at the center of all addictive behaviors… The wound may not be as deep and the ache not as excruciating, and it may even be entirely hidden—but it’s there. As we’ll see, the effects of early stress or adverse experiences directly shape both the psychology and the neurobiology of addiction in the brain.”

As we touched upon above, Gabor Maté has written several best-selling books. Here are the four books he has written:

• Scattered Minds: A New Look at the Origins and Healing of Attention Deficit Disorder (1999)

• Hold On to Your Kids: Why Parents Need to Matter More Than Peers, co-authored with Gordon Neufeld (2004)

• In the Realm of Hungry Ghosts: Close Encounters with Addiction (2008)

Gabor Maté gave a TEDx talk at Rio+20 in 2012. In the talk, which is entitled, The Power of Addiction and The Addiction of Power, Gabor gives an insight into addiction to things from drugs to power. 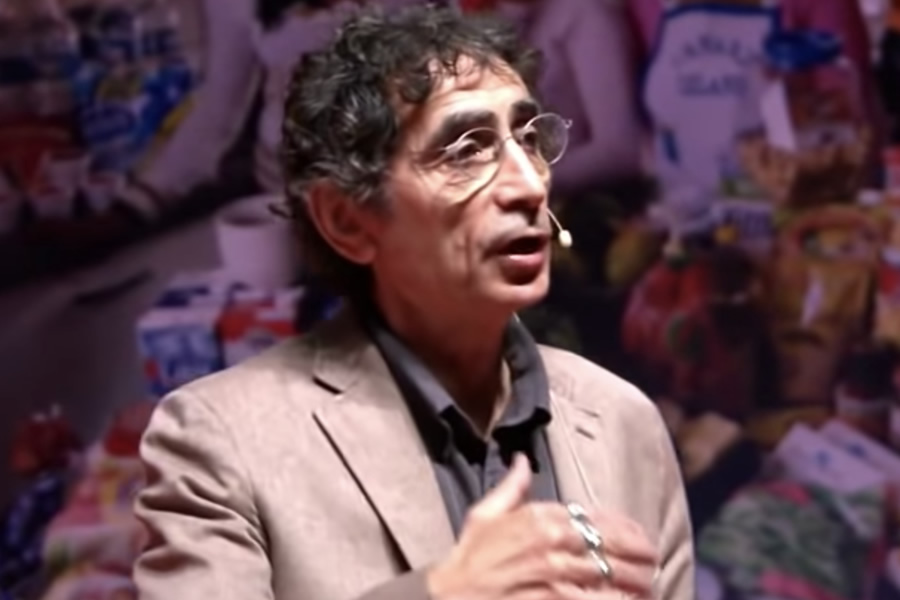 During the talk, which is 19 minutes long and can be found on YouTube, Gabor breaks down some of the similarities between some of the leaders from history which he claims were “addicted to power, to wealth, to acquisition… they want to make themselves bigger”.

He explains during the talk: “When I was trying to understand the addiction to power, I looked at some of the most powerful people in history. I looked at Alexander the Great, Napoleon, Hitler, Stalin…

“First of all, why did they need power so much? Interestingly enough, physically they were all very small people. They were outsiders, they were not part of the major population.

“Stalin was a Georgian not a Russian, Napoleon was a Corsican not a Frenchman, Alexander the Great was a Macedonian not a Greek, and Hitler was an Austrian not a German.

“There was a real sense of insecurity and inferiority. They needed power to feel OK in themselves, to make themselves bigger. In order to get that power, they were quite willing to fight wars and kill a lot of people.”

Gabor Maté has spoken in various interviews about having led a number of healing retreats in the past, where he puts some of his theories into practice to help people work through their problems.

He has spoken at length about his work with the traditional Amazonian plant medicine Ayahuasca during various media appearances and talks.

There is some information online about Gabor Maté Ayahuasca retreats at the Temple of The Way of Light in Peru, with one due to take place in the summer of 2019.

What Can We Learn From Gabor Maté?

Quite clearly, Gabor Maté is a pioneer in the fields of addiction, mind-body health and childhood development.

What comes across strongly in Gabor’s work is his willingness to discuss his own struggles and how understanding his childhood has helped him to make progress.

He has not been afraid to talk about his own addictions, such as an addiction to buying classical music compact discs.

There is a lot to learn from Gabor’s work and we get the feeling that the topics he covers are going to become much more important in the next few years.

There is a lot we can learn from Dr Gabor Maté and his work.

Although his theories are unlikely to be useful for 100 per cent of people, the topics he explores are hugely important and should be looked into further in the coming years.

We salute Gabor for the work he has been doing and hope that you have found this biography useful.