How To Control Your Breathing While Running (According To 8 Experts) 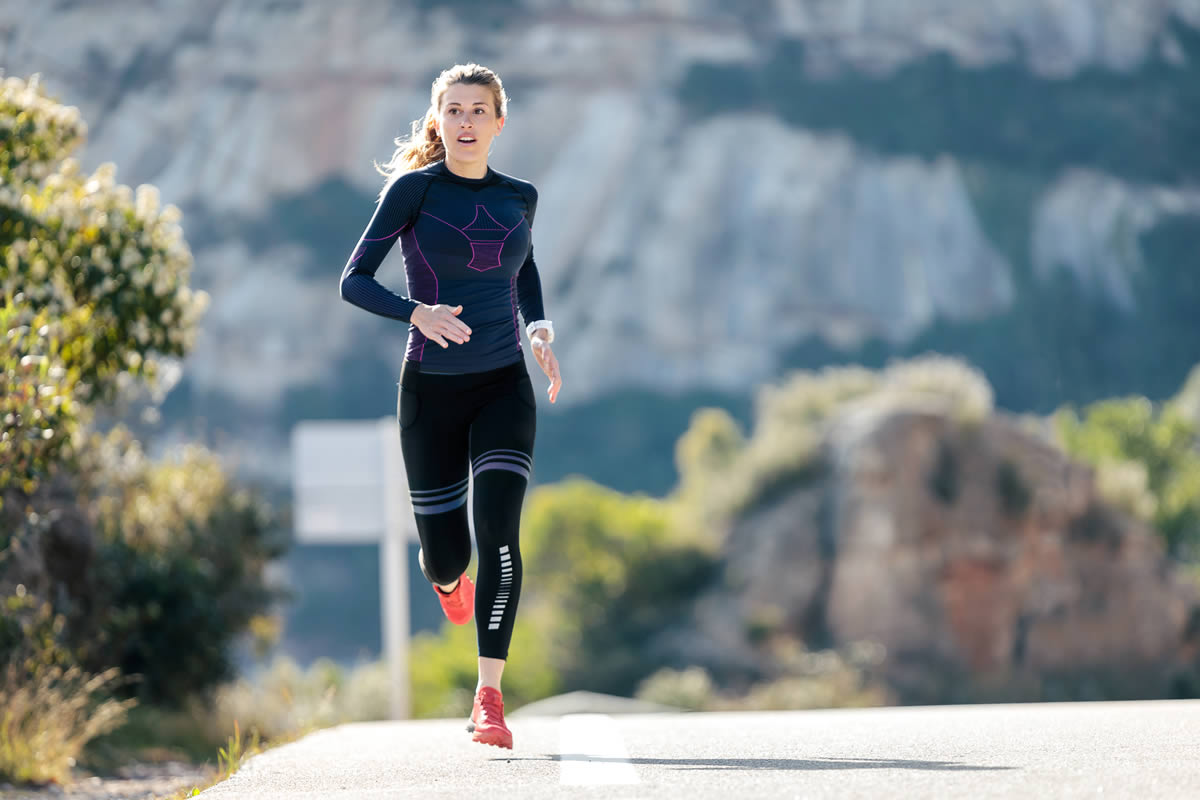 How should you be breathing while running?

If you’re new to running, then you’re probably just starting to get to grips with how your body feels both during and after a run.

Ensuring that you’re breathing properly while running can help to support a more efficient workout.

We asked a selected group of experts about how to control your breathing while running.

Controlling posture, especially that of the head, neck and torso, is one of the best ways to control breathing.

Ideally you want to look forward and have an upright posture while running, but if you find yourself looking down and leaning forward it will hinder your breathing.

Looking down constricts your neck, and therefore your throat, which will impair your breathing. Likewise, a forward torso lean can impair the breathing mechanism and add extra work while running.

A great way for runners to maintain good posture, and therefore to optimize breathing, is to stack their rib cage over their pelvis. Ideally, you want your lower rib cage and pelvis to be parallel to each other and the ground.

This not only promotes optimal posture of the torso, head, and neck, but also allows the diaphragm, your primary breathing muscle, to enhance its efficiency.

A common cause of a forward torso lean while running is overstriding, therefore a good cue for runners is to land with their foot as close to their body as they can while striding.

This will promote proper running posture and decrease the effort required to breathe. 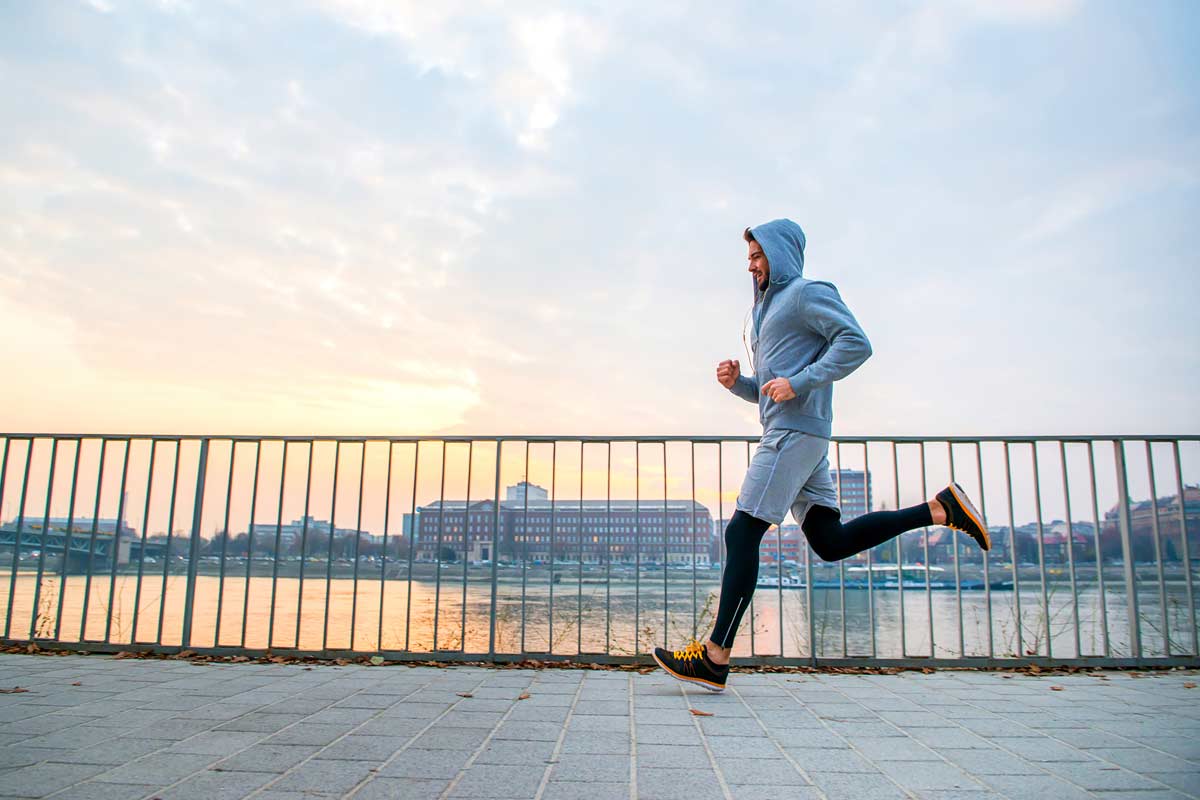 Breathing Well Is The Key To Running Well

Jerry Snider, Coach and Owner of All In Health and Wellness

I believe that breathing is the number one key to running well.

If you are not breathing efficiently, your muscles won’t get the oxygen they need, and you’ll be forced to slow down or stop.

Once that happens, most people will declare they hate running but it’s not the act of running that was the problem but the inability to breathe properly in the act.

So, what is proper breathing? It can be slightly different for everyone but the key is to prevent hyperventilating or very shallow breathing.

Plenty of people are successful breathing in and out through their mouth but the thing you want to avoid is breathing in for one step and out on the next step. That rhythm does not allow enough oxygen to be absorbed and moved around the body and will lead to fatigue and muscle failure more quickly.

Say you try to breathe in for four steps and out for four steps. Your lungs will be loving the oxygen levels but the effort you’ll make to breathe that deeply will distract your body from performing the act of running, thus you slow down.

On the other side of the spectrum, if you feel yourself starting to hyperventilate (or at least breathing awkwardly fast) it’s a great idea to take a deep breath, hold it for just a second to recenter your body and then let it out and restart breathing at a slower pace.

This will slow your running pace temporarily but you’ll be able to pick back up and run efficiently for longer than if you had kept that fast breathing rate.

As with any breathing – during exercise, at rest, sleeping – you want to breathe from the diaphragm and not by lifting the shoulders.

A big tip that helps with breathing while running is something you should do when you are not exercising at all. Sit or stand with proper posture so that your lungs can fill completely with each breath.

It’s basically practice time for your lungs so they are ready when you need them to operate more while running. 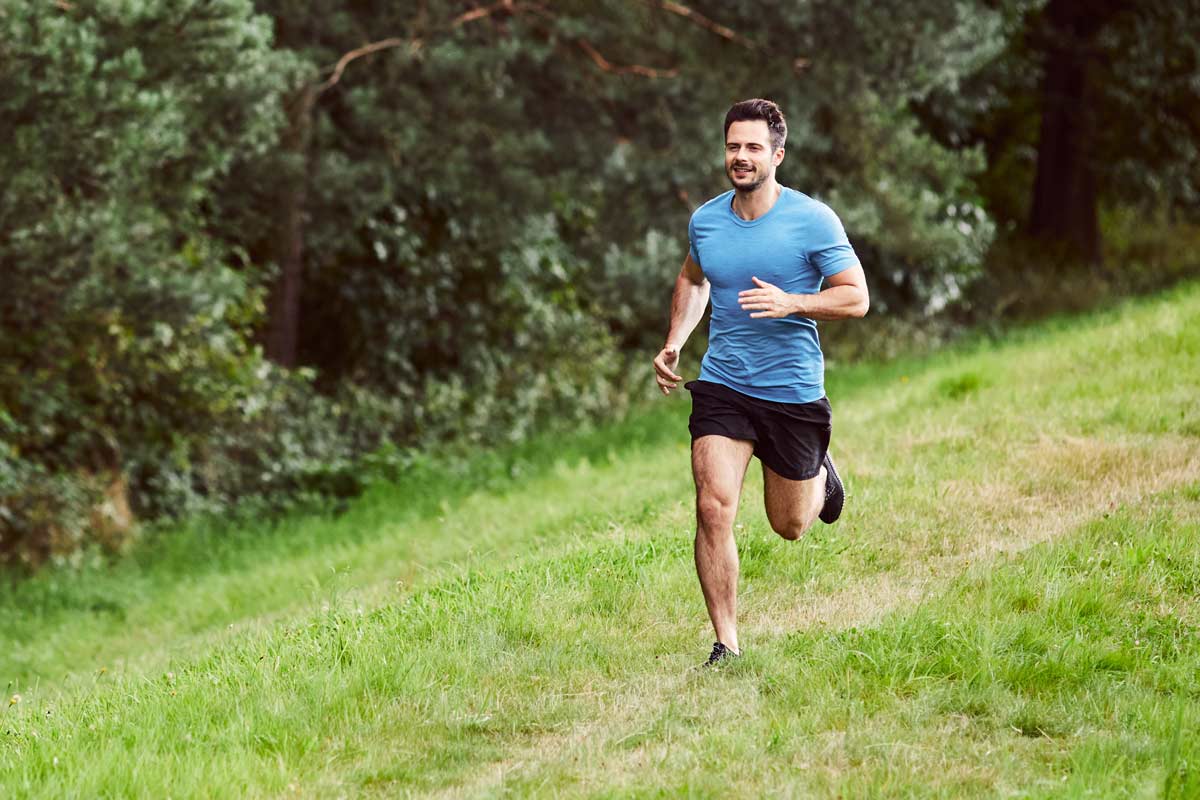 The role of circular breathing, or the process of breathing in through the nose and out through the mouth, is often overlooked, but it’s one of the most important facets of breathwork in runners.

Circular breathing is important for a number of reasons, most notably the way that it helps to control the central nervous system.

Running is all about keeping the body in energy conservation mode: we aim to keep the heart rate low, the breath steady and the burning of the body’s fuel as steady as possible.

If the body begins to expel too much energy (or enters, as it’s more commonly known, fight or flight mode), we lose control of the central nervous system and our bodies react as if we are running from danger.

If you’ve ever felt panicky, uncomfortable or out of control while running, you were most likely experiencing that fight or flight response.

Circular breathing is the most effective way to reassure the body that there is no danger, which keeps the heart rate low, the body’s expenditure low and prevents fight or flight mode.

With one simple technique of breathing in through the nose and out through the mouth slowly and steadily (roughly two counts in and two counts out), we can easily keep the body under control and in energy conservation mode!

The Case For Nasal Only Breathing

One key habit that will help you control your breathing, particularly during long, lower intensity runs, is to stick to nasal only breathing. This means both inhaling and exhaling through the nose.

This can be a challenge at first, but it’s a great habit to develop – particularly if you’re relatively new to running.

Nasal breathing acts as a natural brake on your body, preventing you from going out at a pace that’s perhaps a little fast for you, and ensuring you stay mainly in the low intensity, aerobic training zone.

This is ideal if you’re looking to build a solid aerobic base without placing a large amount of stress on your body, before potentially introducing more high-intensity work further down the line.

When compared to mouth breathing, a 2018 study showed that nasal breathing led to a decrease in respiratory rate and a reduction in the ratio of O2 intake to CO2 output in runners – essentially increasing their efficiency.

There are a number of potential reasons why this might occur:

Firstly, nasal breathing increases the production of Nitric Oxide – a vasodilator that allows for higher concentrations of CO2 in the blood, resulting in increased oxygen availability to the working muscle tissues.

The nasal cavity also helps to add moisture and warmth to any inhaled air, making it easier to absorb and utilize in the lungs. This isn’t the case if we breathe in through the mouth.

Lastly, nasal breathing helps to upregulate the parasympathetic, ‘rest and digest’ branch of the autonomic nervous system. This may help you to feel an increased sense of calm while out on a run – you might even find it’s enjoyable! 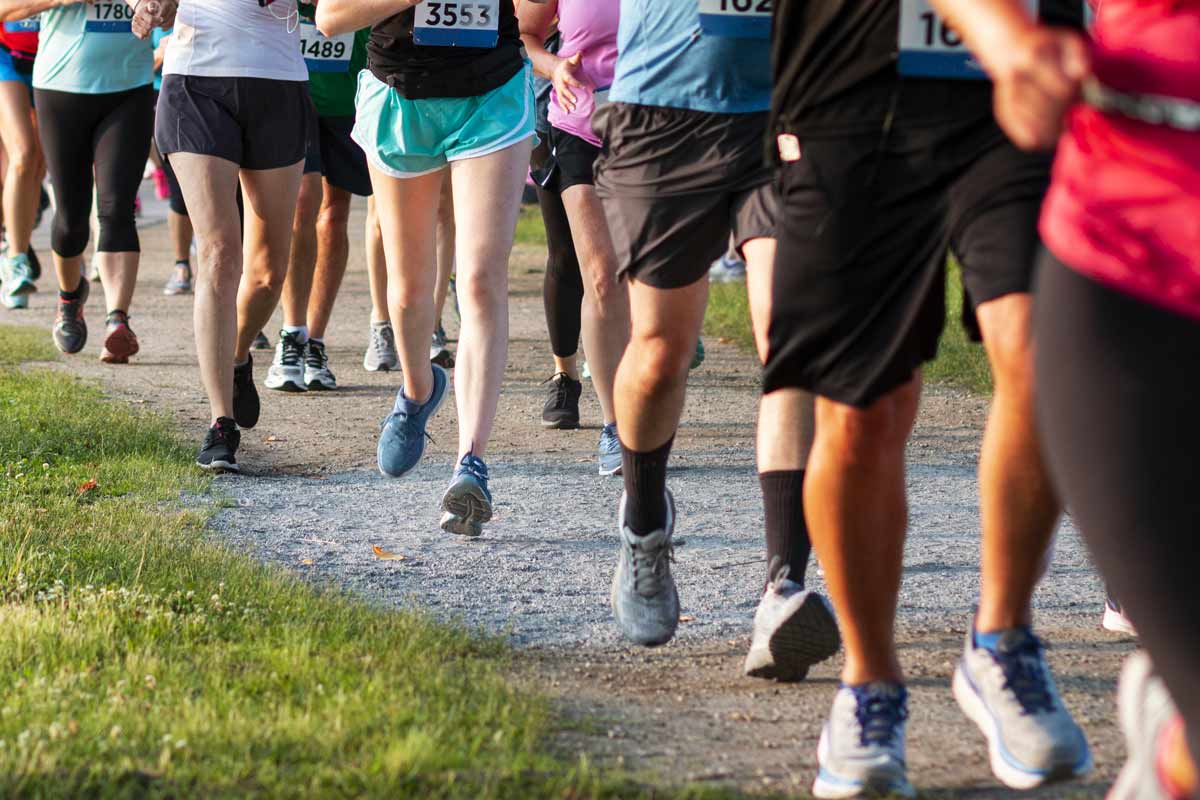 The Case For Breathing Through Your Mouth

I find the main problem with runners and breathing is that they try to control their breathing.

When I am working with a runner who runs too stiffly, I ride next to them on my bike so I can hear their breathing. In every case, they are holding their breath from time to time or trying to breathe just through their nose.

When you are racing, you just cannot get enough oxygen through tiny nostrils. The opening of the mouth is much bigger, so more oxygen can come in.

So the best advice is: don’t control your breath. Open your mouth, let your jaw relax and let your body set your breathing pace according to its need for oxygen.

Also, most distance runners have tight chests, which reduces their lung capacity.

The chest should expand 20 per cent of its circumference when you blow out all your air and take in a deep breath. This means a 36-inch chest should expand 7.2 inches. Most of the runners we work with expand only 2 inches. As we double their chest expansion to 4 inches, their lung capacity increases 33 per cent.

Instead of controlling your breathing while running, it would be far better to increase your chest expansion.

The number one way to control your breathing while running is to slow down.

If your breathing is becoming labored, then slowing down your pace or building in regular walking recovery intervals into the run are needed.

Unless, the workout is specifically targeted to increase speed, then you should never approach breathlessness.

The target for your pace should be conversational. This means that if you were running with a friend, you could get out a sentence while still running. Or if solo you should be able to sing out at least a lyric or two.

Additionally, I have found and recommend highly to my athletes to incorporate yoga and meditation. Both of these practices help to build a more conscious breath-work practice that can be incorporated into running.

Helping them to learn how to breath more deeply through their diaphragm versus the shallow breathing that tends to happen for new runners.

Step one is to make sure you are breathing through your mouth and not solely your nose. This is a mistake I notice often with clients of mine as they workout, and it causes their breath to quickly get out of control.

The next thing to think about when trying to control your breathing is to breathe rhythmically. Every time your foot hits the ground, you should either exhale or inhale. 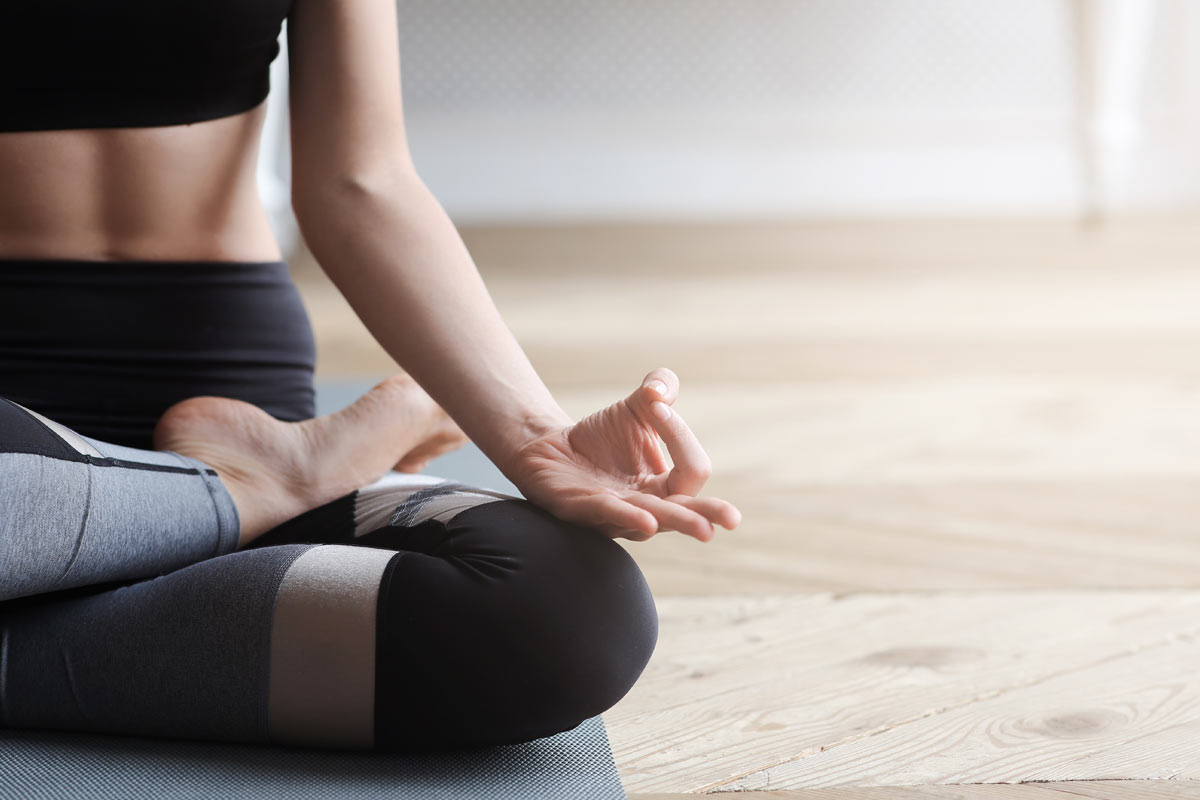 Observe How Your Thoughts Affect Your Breath While Running

Breath is of the essence. It is controlled by the autonomic nervous system yet can be managed to amazing levels that defy explanation as has been demonstrated by many great yoga sages through the ages and by pearl divers of the deep.

With running, it is a matter of tuning in with your perceived comfort zone and becoming familiar with what is ‘OK’ with you.

Becoming aware of your thoughts and seeing how they affect your breath is a start. Agitated emotions and memories will trigger a faster rate of breathing which will then translate to you working too hard.

Amazingly, running takes the edge off and thoughts flow more evenly, which is one of the reasons why so many have taken to the sport. It has amazing benefits.

Learn to tune in and become aware of your foot plant, arm swing, head position and your torso. And learn to sync your breathing with these actions – becoming more and more familiar with your spatial surroundings.

This may take time, and it may seem awkward and cumbersome at first. But suddenly you will find your own rhythm and it becomes so much easier.

You will then find yourself going there more and more until it becomes automatic! Have fun!

Yoga vs Stretching – What’s The Difference?