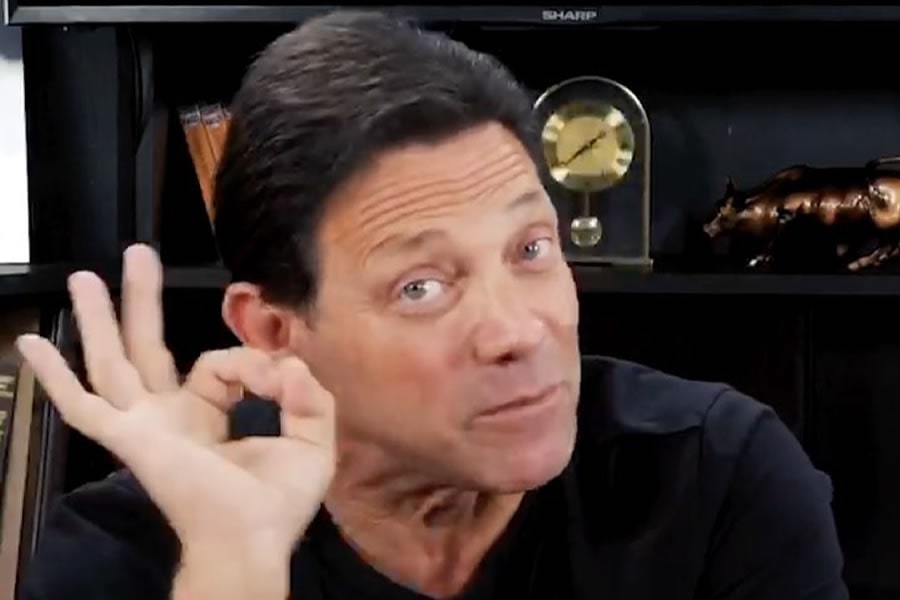 By HumanWindow
Updated on 4 February 2020

He is best known for being the original ‘wolf of Wall Street’, the character on which the 2013 movie by the same name is based.

Belfort has enjoyed a pretty eventful life and he now works as an author and motivational speaker, after having served just under two years in federal prison.

Jordan’s life now revolves around inspiring others to learn from his mistakes and teach his valuable life lessons to the younger generations.

He has appeared on a number of podcasts in recent years, including the Jay Shetty podcast in 2019.

Quite clearly, Jordan’s life has been a pretty remarkable one. But how much do we know about his journey and what lessons can we take from his life story?

This in-depth Jordan Belfort biography is going to focus on all of important parts of his life as we take a look at what we can learn from his journey.

So, with the introductions out of the way, let’s start taking a closer look at Jordan Belfort’s life from a closer angle. This is his story.

Who Is Jordan Belfort?

You have probably already heard of Jordan Belfort because of the 2013 movie, The Wolf of Wall Street, starring Leonardo DiCaprio. But how much do you know about Jordan the man?

Jordan Belfort was born on 9 July 1962 in the Bronx in New York City, and to a Jewish family. He was raised in Bayside, Queens.

Belfort studied and graduated from American University in Washington DC with a degree in biology. 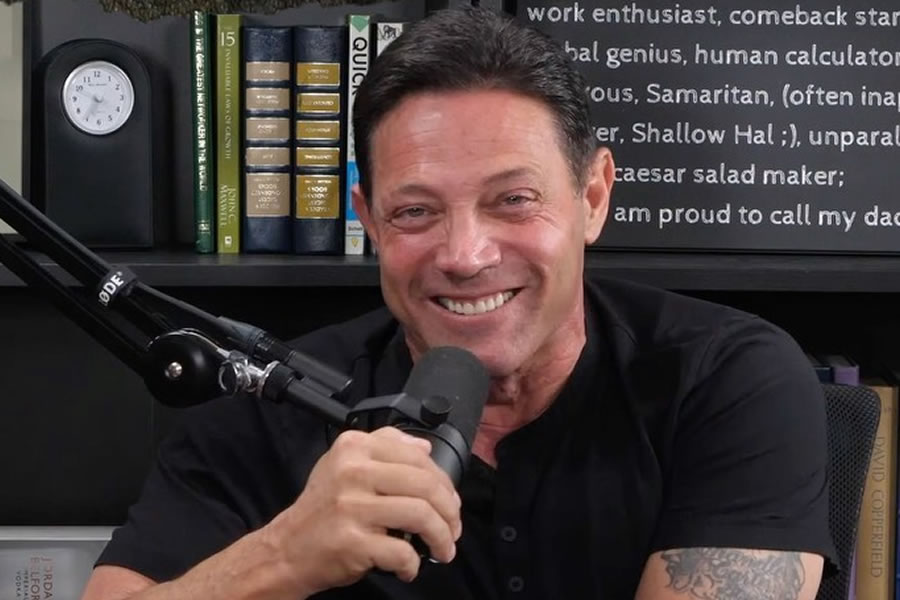 He was all set to begin studying to become a dentist, and he even enrolled at the University of Maryland School of Dentistry. However, he quit on his first day.

Belfort says that he opted not to continue with a career in dentistry after the dean said on his first day: “The golden age of dentistry is over. If you’re here simply because you’re looking to make a lot of money, you’re in the wrong place.”

A family friend then helped him find a job as a trainee stockbroker at L.F. Rothschild.

He then went to work at Investors Center, a penny stock house, and a year later opened a franchise of broker-dealer Stratton Securities.

Jordan and his partner then earned enough to buy out Stratton and form Stratton Oakmont. The rest, as they say is history.

The firm’s dodgy dealings soon landed Belfort and his company in hot water with the law.

In 1992, the US Securities and Exchange Commission sought to close down Stratton Oakmont, claiming that the company had defrauded investors and manipulated stock prices.

The National Association of Securities Dealers ejected Stratton Oakmont from its association in 1996 and it was soon liquidated to pay off its mounting list of fines and settlements. In 1999, Belfort pleaded guilty to securities fraud and money laundering.

In 2003, Belfort was sentenced to four years in prison and personally fined $110m. He served 22 months in jail at the Taft Correctional Institution in Taft, California.

“I got greedy,” Jordan explains.

“Greed is not good. Ambition is good, passion is good. Passion prospers. My goal is to give more than I get, that’s a sustainable form of success.”

Tommy Chong was one of Jordan’s fellow inmates during his time in prison and he encouraged him to write about his experiences as a stockbroker.

The pair remained friends after their release from prison and Jordan credits Chong with helping to inspire his decision to focus on writing and motivational speaking as a career. 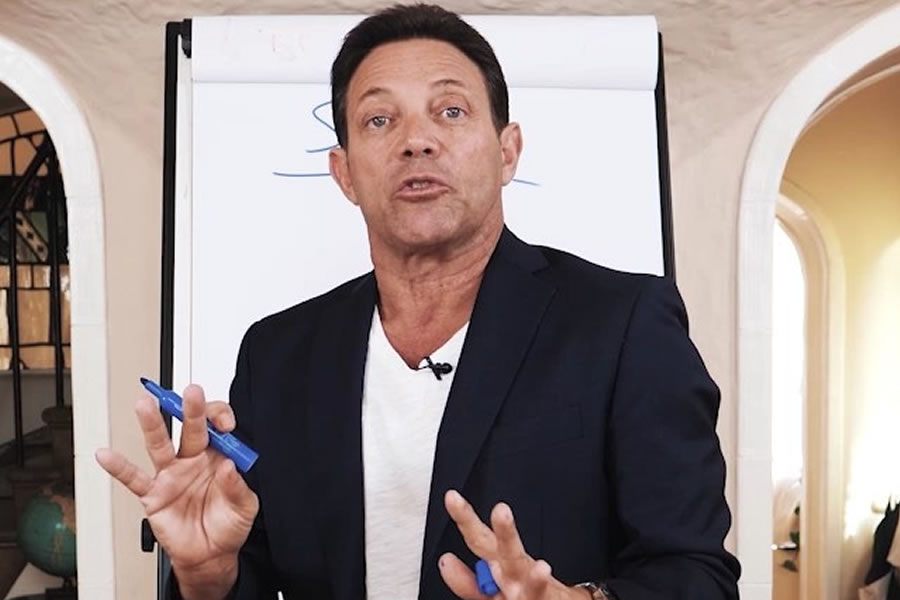 A movie of his books, called The Wolf of Wall Street, was released in 2013. It starred Leonardo DiCaprio as Belfort and grossed more than $300m worldwide.

Jordan has been making a career as a motivational speaker since then, and he has appeared on various popular podcasts to recount his story and lessons from his life.

One thing that has become clear from Jordan’s life after prison is that he seems intent on helping people to learn from his mistakes as a stockbroker.

“What I sincerely hope is that my life serves as a cautionary tale to the rich and poor alike,” he explains.

“To anyone who’s living with a spoon up their nose and a bunch of pills dissolving in their stomach sac; or to any person who’s considering taking a God-given gift and misusing it; to anyone who decides to go to the dark side of the force and live a life of unbridled hedonism.

“And to anyone who thinks there’s anything glamorous about being known as a Wolf of Wall Street.”

Jordan has also worked to make it clear that he feels that he is a completely different person from the one who was depicted in the movie.

“The movie came out a few years back but it depicts events from my life almost 30 years ago,” he said in an interview with The Guardian. “I’m not the same Jordan Belfort.

“I continue to pay back money and I am hopeful that I will pay back all the money. It’s frustrating because you want to reinvent yourself and you feel you have. And he knows your past is always there.”

The Wolf Of Wall Street Movie

It starred Leonardo DiCaprio as Belfort and Jonah Hill as his business partner and friend, Donnie Azoff. It also starred Margot Robbie as his wife. 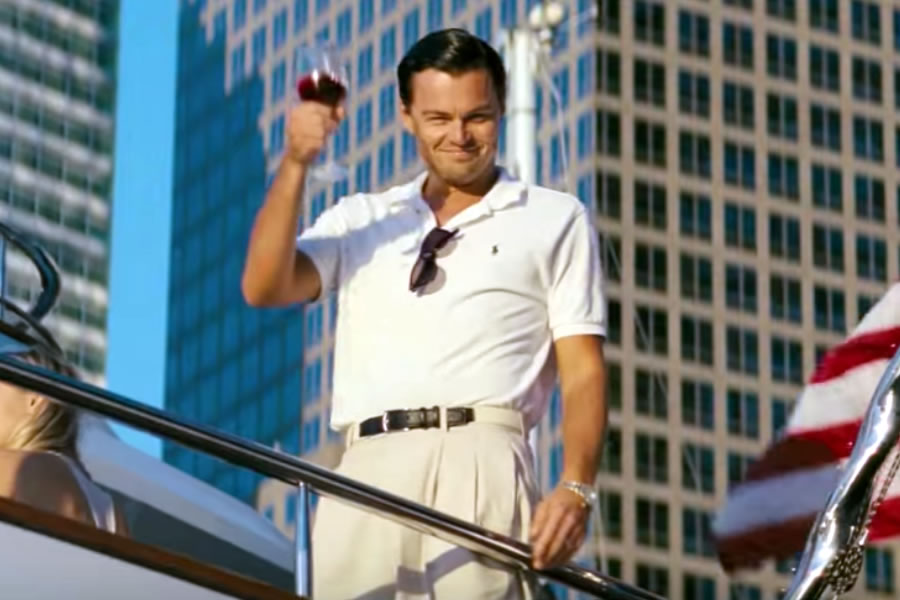 Leonardo DiCaprio as Jordan Belfort in the 2013 movie, The Wolf of Wall Street (Photo: Paramount / YouTube)

Jordan worked closely with DiCaprio to make sure that he was depicted in an accurate way.

“I spent hundreds of hours with Leo doing everything you could imagine, from hanging out socially to showing him what it’s like to be on drugs. I took him through the stages and I was rolling on the floor in his house as he was filming me.”

The film received positive reviews from critics and it was director Martin Scorsese’s highest grossing film.

Age, Wife and Net Worth

Jordan Belfort’s wife is Anne Belfort, who he married in 2008.

There is no official figure for Jordan Belfort’s net worth. There are various websites which claim to estimate it, and the numbers range quite dramatically.

Jordan Belfort’s life story is clearly an intriguing one. Here are some of our favourite Jordan Belfort quotes that we’ve found. 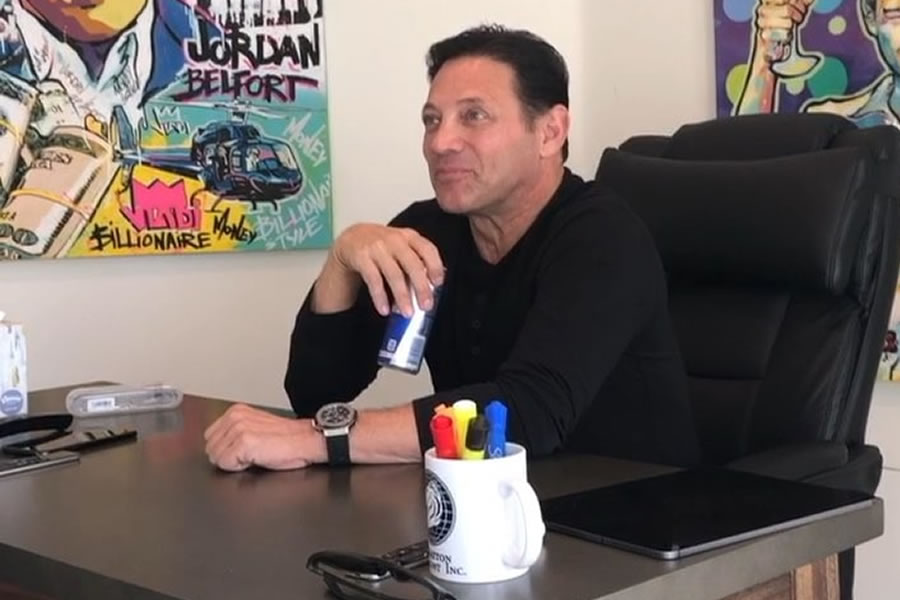 “No matter what happened to you in your past, you are not your past. you are the resources and the capabilities you glean from it. And that is the basis for all change.”

“When you live your life by poor standards, you inflict damage on everyone who crosses your path, especially those you love.”

“You grow stronger from failure than you do from success.”

“Never give up. People tend to give up. If you have persistence, you will come out ahead of most people. more importantly, you will learn.”

“The best way to sell something is don’t sell anything. Earn awareness, respect and trust of those who might buy.”

What Can We Learn From Jordan Belfort?

Quite clearly, Jordan Belfort’s life story is an intriguing and dramatic one.

He clearly made a lot of mistakes during his years with Stratton Oakmont, and he felt the full force of the law as a result, spending almost two years in prison.

However, since his release from jail, Jordan seems to be intent in righting his wrongs and helping people to learn the lessons from his past.

He is also engaged in helping others by teaching some of the sales skills which came so naturally to him during his career as a stockbroker.

That brings us to the end of our Jordan Belfort biography.

We’ve taken a close look at his life, from his early career as a stockbroker, to how he winded up in prison, before reinventing himself as an author and public speaker and having a movie made about his life.