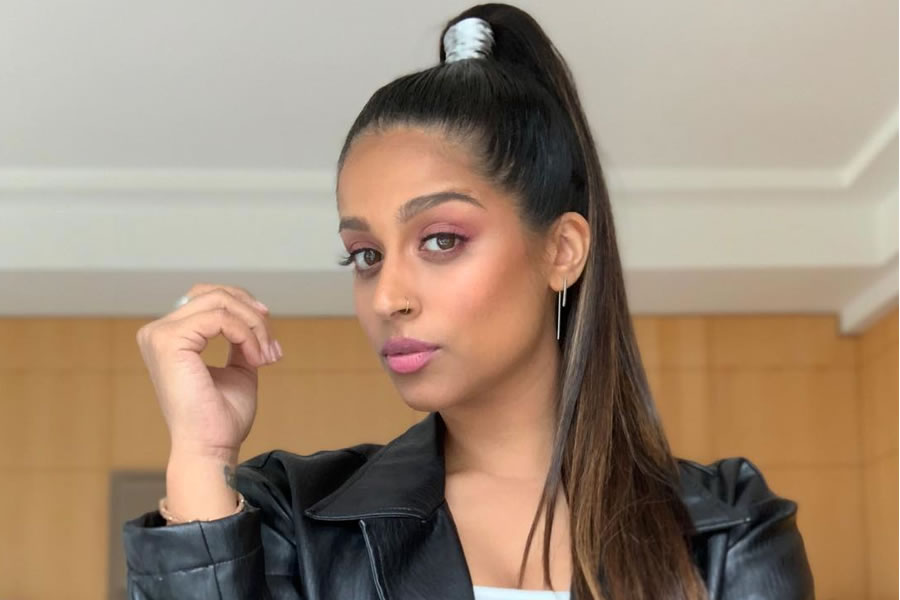 She was born and raised in Scarborough, Ontario, Canada and she is widely recognised as one of the most successful online video creators of her generation.

Lilly started her YouTube channel, IISuperwomanII, back in 2010 and at the time of writing, she has more than 14 million subscribers.

Lilly is the brains behind the #GirlLove campaign, which was founded to help end girl-on-girl hate.

She is clearly a huge success story of the YouTube generation, but where did her journey start and what about her early life?

This in-depth Lilly Singh biography is going to focus on all of the important things about her story and also the key things we can learn from her journey.

We’re going to take a close look at her journey towards being a YouTube sensation.

So, with the introductions out of the way, let’s start taking a look at Lilly Singh’s incredible and inspiring story.

Who Is Lilly Singh?

As we have already mentioned, Lilly Singh is an online video content creator who has more than 14 million subscribers on YouTube. Lilly was born on 2 September 1988 in Toronto, Ontario, Canada.

She started her channel, IISuperwomanII, back in 2010, and she is now widely recognised as one of the top YouTubers of her generation. When she started her YouTube channel, she lived with her parents in Markham, Ontario.

“Superwoman and Lilly are pretty much the exact same person in terms of personality,” she explained in an interview back in 2010.

“I am pretty weird, as weird as in my videos, the only difference is Lilly is not a performer and Superwoman is. 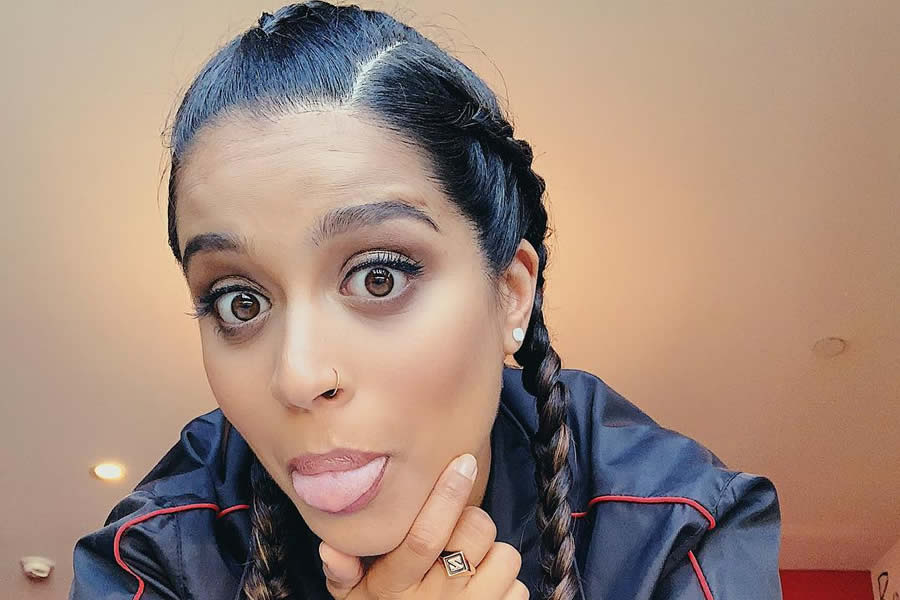 Her parents, Malwinder Kaur and Sukhwinder Singh, are originally from Hoshiarpur, Punjab, India, and she was raised as a nonobservant Sikh.

Lilly Singh has an older sister called Tina, who was born in 1982. Tina has her own YouTube channel called MOM BOSS OF 3, which was launched in January 2016.

Growing up, Lilly admits that she was an extrovert, who “used to be that annoying kid at parties who would be at the center of a circle to get everyone’s attention,” she said in an interview back in 2016.

She began posting videos on YouTube in 2010 while she was still a student as a way of dealing with her depression and lack of enthusiasm for pursuing a standard career path.

“It [posting on YouTube] definitely gave me a sense of community when I needed it,” Lilly explains in an interview back in May 2018.

“It was a great way of connecting with people. When I was posting my videos, I didn’t feel alone.

“It was an outlet for me to talk literally about anything and find that people related to it. Knowing that they were going through what I was going through really helped.”

Her first video only got around 70 views but she says that persistence was a big key to her success.

“Every video and every tweet has counted,” she explains. “My climb was slow. I took the stairs, not the escalator.” 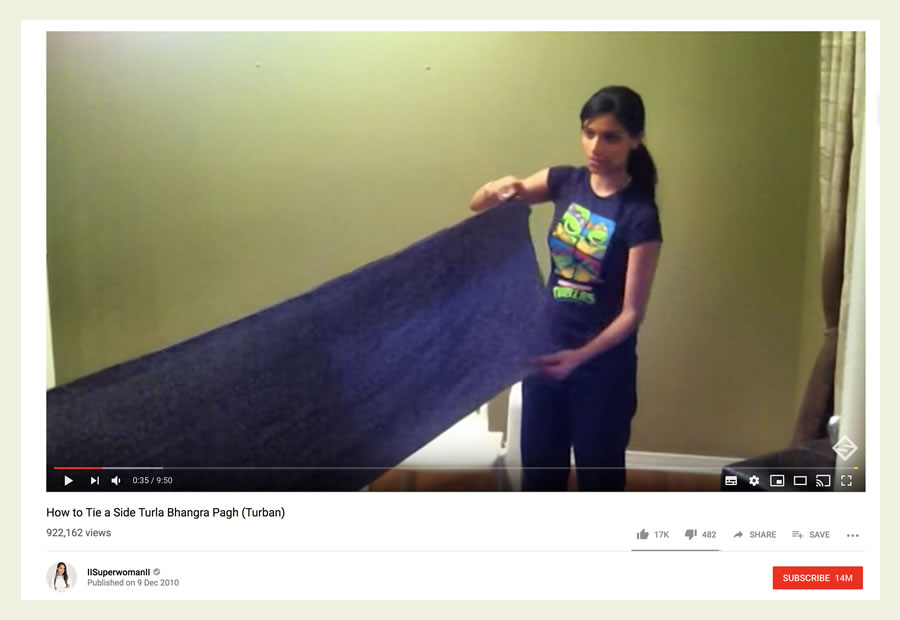 Lilly’s YouTube channel has now amassed more than three billion video views since its creation back in 2010.

However, she is quick to underline that she tries not to define herself by how many views her videos have had.

“You get into the habit of seeing yourself through your number of views and subscribes which is an unrealistic approach to success,” Lilly explains. “You can’t compare yourself to a video of an adorable puppy!

“What I do is comedy sketches so I’ve had to change my definition of success to making content that makes me proud – not whether I’ve had good or bad views.

“I can’t define myself by views, it’s not a sustainable measure of success.”

In December 2015, Lilly moved from her home country of Canada to Los Angeles to further her career.

Although her success is clear for all to see, Lilly admits that it wasn’t until she travelled to India and received recognition there that she truly appreciated how far she had come.

“I haven’t had that eureka moment but the closest thing I’ve had was actually late in my career. I had already surpassed 1 million subscribers; even then I didn’t feel like I made it,” she explains.

“Then I travelled to India for the first time to perform as Superwoman.

“It was something about going literally across the world but also going to the place where my parents were born and being recognized and received well there. Something about it validated me and now my parents get it.”

Along with other big names such as Grace Helbig and Lindsey Sterling, she encouraged young girls to spread love, instead of hate, by complimenting other girls rather than insulting them.

She announced the campaign in a video called The #GirlLove Challenge, which was posted on her YouTube channel on 28 December 2015. It has since received more than 1.7 million views.

Lilly’s success has not gone unnoticed, and she has won a number of awards for her work in recent years. 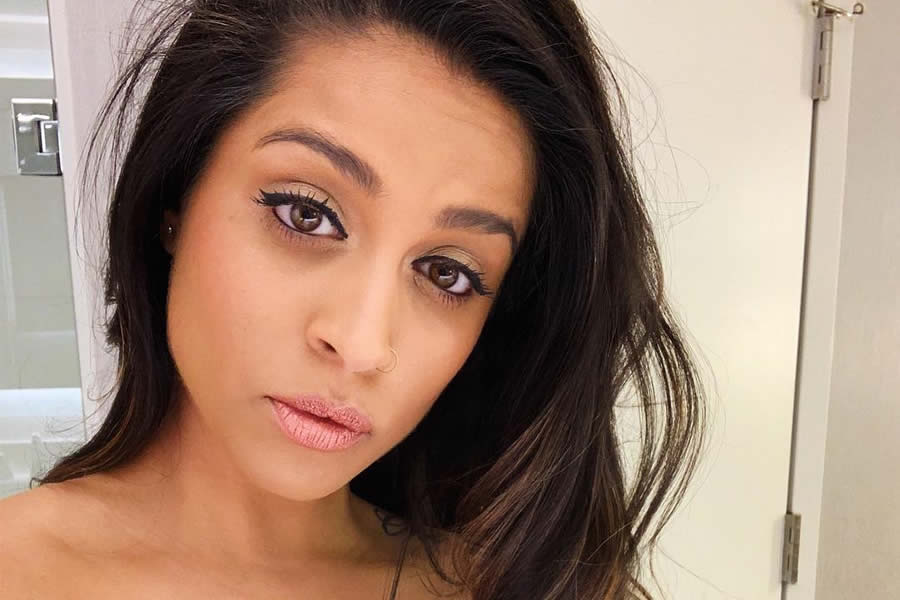 She was ranked at number on in the entertainment category of Forbes magazine’s Top Influencers List for 2017.

Lilly has collaborated with a number of famous stars, including The Rock, Jay Shetty, Seth Rogan, James Franco and Chelsea Handler.

Other celebrities she has collaborated with include Selena Gomez, Priyanka Chopra, Shay Mitchell, Amber Rose and Steve Aoki.

However, there is one person she would still love to collaborate with – actress Emma Watson.

“On and off-screen, she’s a force, talented and works on things much larger than herself,” Lilly explains. “I would love to work with her.”

In a tweet posted on 25 February 2019, she wrote: Female. Coloured. Bisexual. Throughout my life these have proven to be obstacles from time to time. But now I’m fully embracing them as my superpowers. No matter how many “boxes” you check, I encourage you to do the same x.”

In a post on Instagram shared in April 2019, Lilly took some time to reflect on her success.

She wrote: “During interviews people often ask me what the secret to my success is and I think they expect me to tell them the recipe to a viral video, a financial strategy or maybe even a technique to improve work ethic.

“Sometimes I have great days and sometimes I cry myself to sleep. Either way, in the morning, I get back up. And then someone breaks my heart into a million pieces and I get back up.

“No matter what happens, I dig into the depths of my soul and when it feels utterly impossible… I somehow get back up. And it’s hard every single time but I will keep doing it. And so can you.” 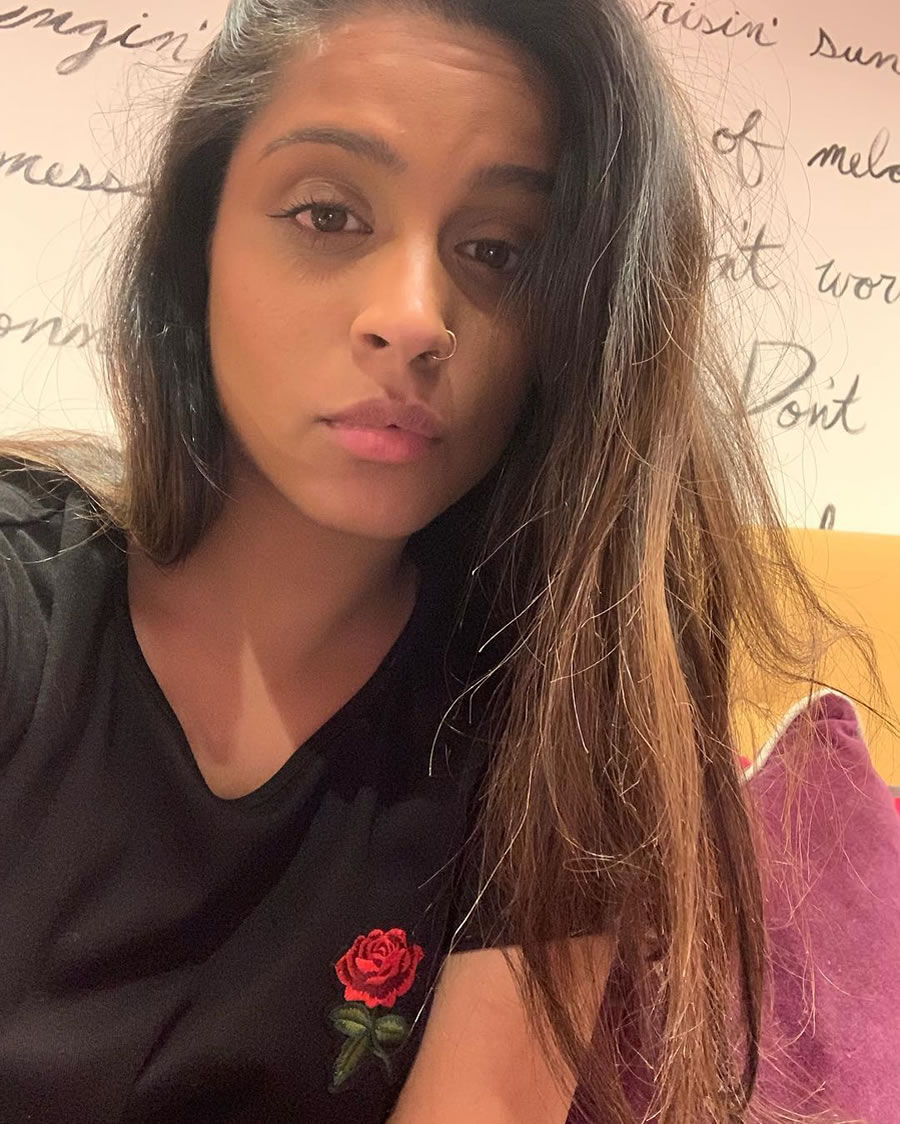 It is quite clear that Lilly Singh’s story is a truly inspirational one.

She has managed to build an enormous following on social media thanks to her entertaining videos and clips.

But more than that, Lilly has shown an admirable desire to use the platform she has built to spread positive messages.

We salute Lilly’s passion and hard work – and we could do a lot worse than follow her example.

Lilly was born on 2 September 1988 in Scarborough, Ontario, Canada. She is currently 34 years old.

Although Lilly Singh’s actual net worth is not confirmed, we do know a little bit about her financial success from past mentions in the mainstream media.

For example, Forbes listed her as the 10th highest-paid YouTube star of 2017, putting her annual earnings at a staggering $10.5m.

According to Biography.com, a substantial part of her earnings come from brand partnerships with the likes of Coca Cola, Pantene and Calvin Klein.

In December 2017, Lilly announced the launch of her official merchandise line.

It features various clothing items such as #GirlLove hoodies and “HUSTLE” beanie hats.

As she announced her Merch line, Lilly wrote: “It’s FINALLY here! My official merch is launching RIGHT NOW! Go to http://LillySingh.com to get it first while supplies last! #TeamSuper.” 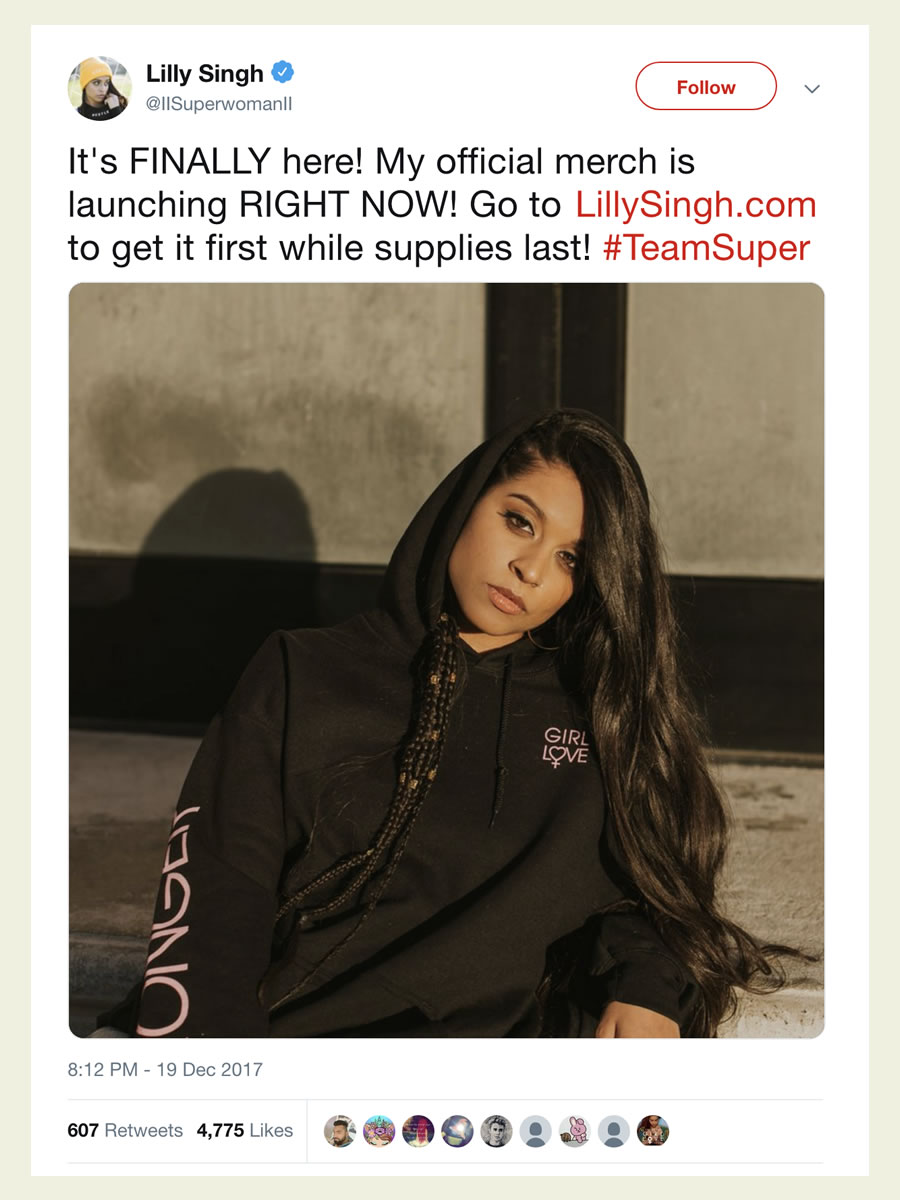 Lilly Singh’s parents are Malwinder Kaur and Sukhwinder Singh. They are originally from Hoshiarpur, Punjab in India.

She has an older sister called Tina, who was born in 1982.

Lilly has discussed how her parents reacted to her success on YouTube in an interview published back in June 2015.

“When I first started it was not that they were unsupportive, they just didn’t get it and that’s fair,” she explains.

“Even my friends don’t get YouTube right now. It took my relatives calling them saying, ‘Is your daughter Superwoman?’ [and also the fact that] I could sustain myself financially.

“Recently, I feel so grateful because they’ve become supportive in a new way. They actually watch my videos and understand the art I’m doing.

“My mom really believes my message. My dad has watched all my videos and he knows how many subscribers I have at any given moment, he’s obsessed. They understand what I’m trying to do and that’s really special to me.” 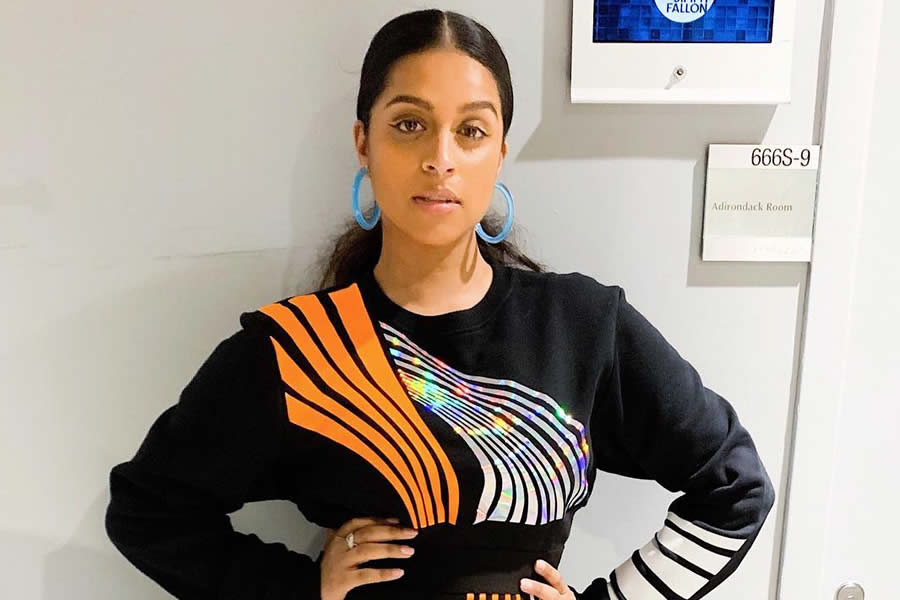 What Can We Learn from Lilly Singh?

Quite clearly, Lilly Singh’s story is an inspirational one.

She used the medium of creating YouTube videos to work through a difficult time in her life, and she has since become one of the most influential online video content creators of her generation.

Most importantly, Lilly has shown a strong desire to use her platform for good.

Examples of this are the #GirlLove campaign and the fact that she is always looking to spread positive messages.

We could do a lot worse than follow the example set by the self-titled Superwoman.

There is a lot to admire about Lilly Singh.

From having the courage to come out as bisexual to the public, to showing a strong desire to spread positive messages, we could do a lot worse than look up to her as a role model.