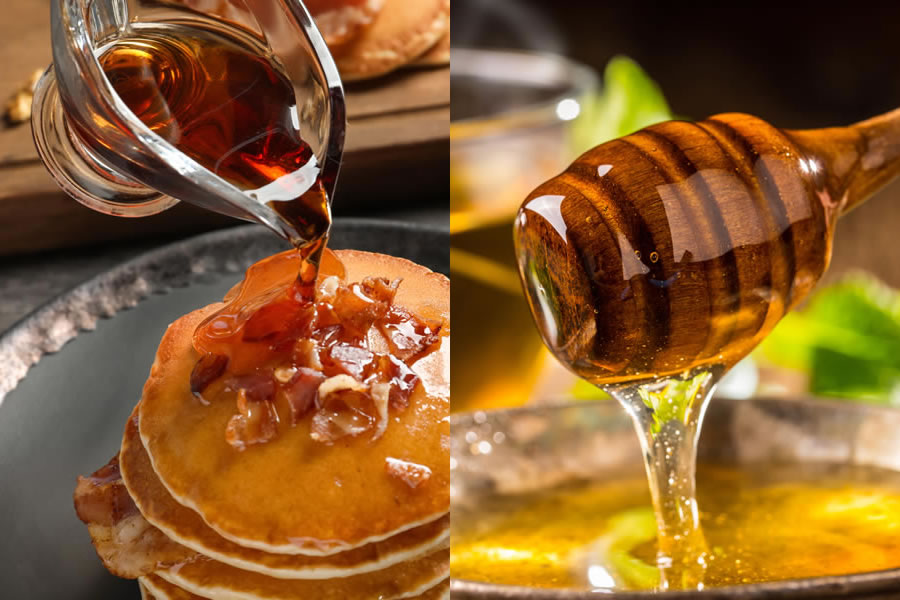 If you’ve landed on this page, you’re probably looking to find out whether Maple Syrup or Honey are suitable for Vegans or not.

If you’re looking for the lowdown on whether these sweet spreads are suitable for Vegans or not, then you’ve landed on the right page.

Whether you’ve been following a Vegan diet for some time or have just started on the plant-based road, it’s important to be able to know which food products are suitable for Vegans or not.

Vegan diets and lifestyles have become much more popular in recent years, with documentaries such as What the Health having brought Veganism further into the public eye.

If you are Vegan or thinking of embarking on a Vegan diet, then making sure you are sure about which products are Vegan friendly or not is important.

In this article, we’re going to take a close look at both Maple Syrup and Honey to see whether they are suitable for Vegans or not.

So, with the introductions out of the way, it’s time to start taking a closer look at both Maple Syrup and Honey to find out if they are Vegan friendly or not.

What does Vegan Mean?

Veganism, or being a Vegan, is simply the practice of choosing not to use animal products, particularly in diet.

It is also an associated philosophy that rejects the commodity status of animals.

In terms of Nutrition, Veganism is a type of vegetarian diet that excludes meat, eggs, dairy products and all other animal-derived ingredients.

Many vegans also do not eat products that are processed using animal products, such as refined white sugar and some wines.

What is Maple Syrup? 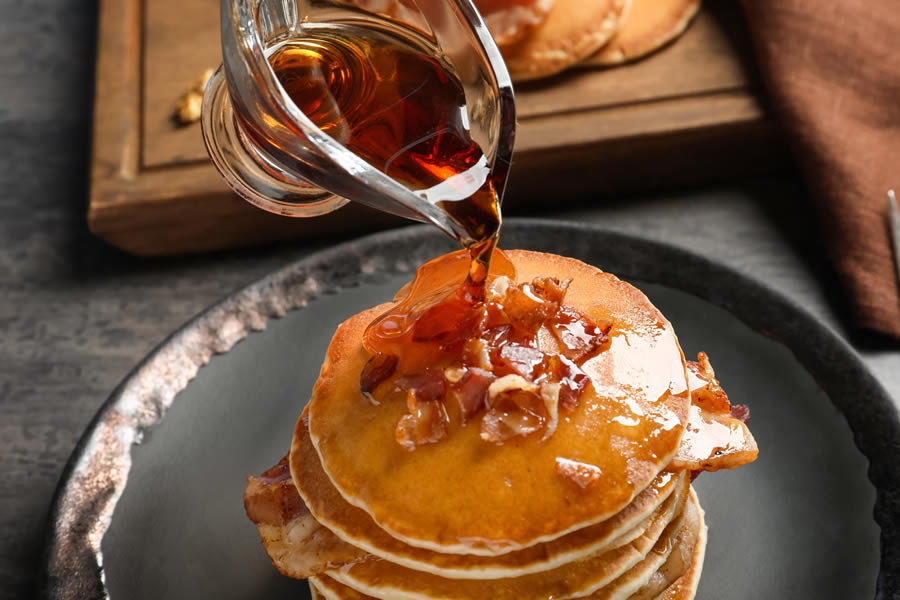 Let’s start with the basics, in case you didn’t already know them.

Maple Syrup is a thick, golden syrup usually made from the xylem sap of sugar maple, red maple, or black maple trees, although it can also be made from other maple species.

It’s often used as a condiment for pancakes, waffles, French toast, oatmeal or porridge – and it is also sometimes used a sweetener for baking.

You’ve probably had some before, either added as a condiment to things such as pancakes, or maybe you’re already a seasoned veteran and have been using it for baking.

The sap from the Maple tree is usually the sole ingredient for Maple Syrup, although some manufacturing processes can add other ingredients.

So, now that we’ve covered the basics about Maple Syrup, it’s time to find out whether it’s suitable for Vegans or not.

The simple answer to this question is yes, pure Maple Syrup should be suitable for Vegans. However, there are some things to bear in mind.

The sole ingredient of Maple Syrup is the sap from the Maple tree, which is of course Vegan. However, there are some cases in which manufacturers may use animal fats as part of the production process. If this is the case, then clearly your Maple Syrup is no longer Vegan friendly.

If you are unsure, simply check the ingredients label of your product to see if it is marked as Vegan Friendly or not, and if it has any added ingredients.

As long as your product of choice is marked as Vegan friendly, then Maple Syrup is a great Vegan friendly option for a sweetener.

So to summarize, Maple Syrup in its pure form is Vegan friendly, although some non-Vegan friendly ingredients are sometimes added during the production process. Check the label of your product to be sure.

Let’s now take a closer look at Honey, which falls into a similar category as Maple Syrup. 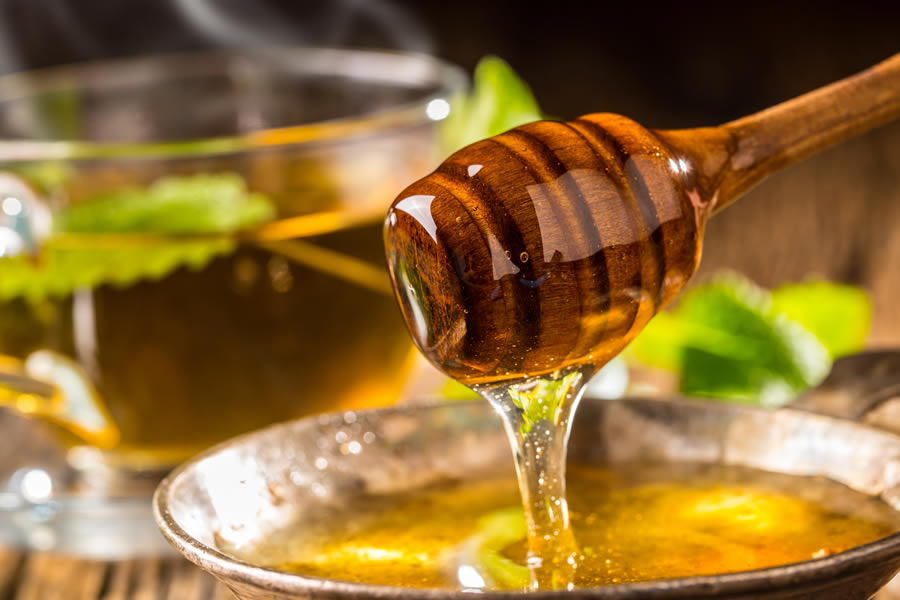 You probably already know all about honey, but let’s cover the basics quickly anyway.

In case you didn’t already know, Honey is thick, golden liquid produced by industrious bees. Honey is made using the nectar of flowering plants and is saved inside the beehive for eating during times of scarcity.

Honey is collected from wild bee colonies, or from hives of domesticated bees, a practice which is known as beekeeping.

Like Maple Syrup, honey is often used as a condiment for certain foods and also as a sweetener.

So, now that we’ve introduced the basics about honey, it’s time to find out whether it’s Vegan friendly or not.

So, is honey suitable for Vegans? The simple answer to this question is no. Vegans avoid animal products, and bees are an animal.

That being said, honey is a hotly-debated and controversial food among vegans.

If you assumed that honey was a Vegan friendly product, then you’re not alone. According to the Vegan Society, honey is probably the product most frequently mistaken as vegan-friendly.

Honey is made by bees for bees, and according to the Vegan Society, their health can be sacrificed when it is harvested by humans.

So, generally speaking, most Vegans avoid honey because it is made by bees.

That being said, some people who stick to a strict plant-based diet also opt to include honey in their diets.

Bees play an essential role in the ecosystem and unfortunately, bee populations are declining worldwide.

Bees help to transport pollen and seeds between a wide variety of flowers. Without bees, many plants would not be able to reproduce.

So to summarize, most Vegans avoid eating honey to take a stand against bee exploitation.

If you’re looking for a Vegan alternative to Honey, then look no further than Maple Syrup!

So, to summarize, Maple Syrup is Vegan Friendly, but Honey is not.

That’s because honey is made by bees, and so most Vegans choose to stay away from it.

Maple Syrup is a good Vegan alternative to honey, but there are a couple of things to bear in mind.

Both Maple Syrup and Honey are high in sugar, so they should be consumed in moderation.

It’s also worth remembering that some Maple Syrup manufacturers may add animal products during the production process, and this of course, would mean that it’s no longer Vegan friendly.

There are many plant-based alternatives to Honey, and Maple Syrup is one of them.

So that brings us to the end of our look at Maple Syrup and Honey and whether they are suitable for a Vegan diet or not.

We’ve walked you through the basic facts about both of these golden sweeteners.

We’ve also taken a close look at both Honey and Maple Syrup to see if they are Vegan friendly or not.

To summarize, Maple Syrup is Vegan friendly and it’s a great choice if you’re looking for a plant-based sweetener.

That said, be sure to check the label of your Maple Syrup product to ensure that it is a Vegan friendly one, as some manufacturers may add animal products during processing.

Meanwhile, despite being a hotly-contested topic, Honey is not generally considered to be Vegan friendly, because it is made by bees.

So with that in mind, Maple Syrup is actually a great plant-based alternative for Vegans looking for a Honey alternative.

Spinach vs Kale vs Broccoli – Which One Is Best?