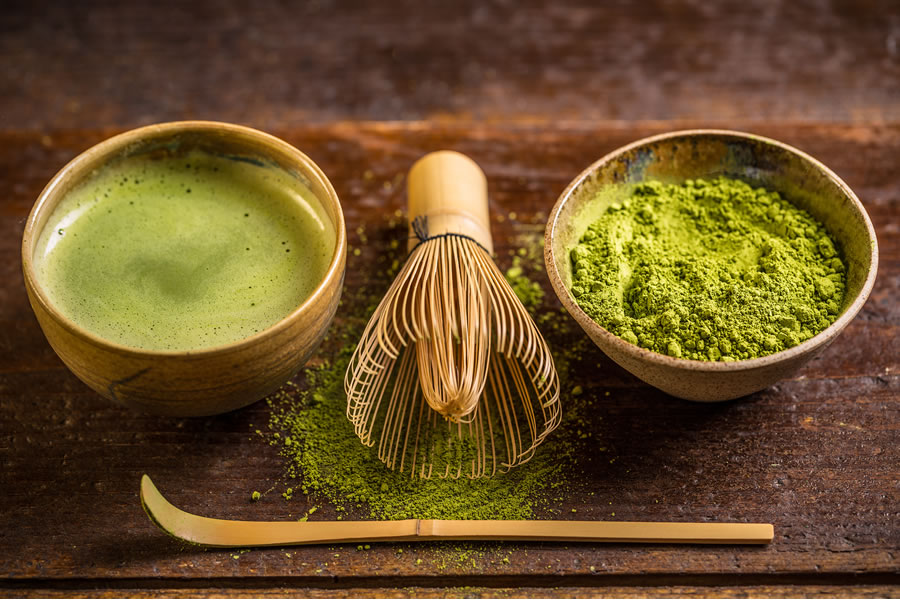 Does Matcha Green Tea contain Caffeine, and if so, how much?

Matcha has become very popular in recent years, and people who are just starting out with it often want to find out whether it contains Caffeine and how much.

To keep things short and simple, yes Matcha powder does contain Caffeine. If you’re wondering exactly how much, read on.

We’re going to break this article into the following sections:

So, with the introductions out of the way, let’s start taking a close look at what Matcha Green Tea is, and how much Caffeine it actually contains.

What is Matcha Green Tea?

If you’re reading this article, you’re probably already familiar with Matcha, or at the very least, you’ve already heard of it or tried it before.

However, let’s quickly cover the basics of exactly what Matcha is and how it differs from normal Green Tea.

In case you didn’t know Matcha is a type of Green Tea which is believed to have originated in Japanese culture.

Matcha is a finely-ground powder of specifically grown and processed Green Tea leaves, which are rich in nutrients.

As well as the fact that Matcha leaves are ground into a fine powder, it is also grown in a specific way which sets it apart from regular Green Tea.

The Green Tea plants of Matcha are grown in the shade for three or four weeks before harvest – and the stems and vines are removed during processing.

Because it is grown in the shade in the final few weeks before processing, the Green Tea plant produces more Theanine and Caffeine.

You probably already know this, but the powdered form of Matcha is mixed in a liquid, typically water or milk, rather than being brewed in teabags.

This makes it different from Regular Green Tea and Black Tea, as with Matcha, you are actually consuming the ground powder of the tea leaves themselves.

You are probably already familiar with Caffeine and its benefits.

It is one of the most commonly used stimulants in the world, and it is used by millions of people on a daily basis.

Caffeine can help to promote a feeling of wakefulness and alertness, and many people choose to start their day with some form of it.

It’s commonly found in Coffee and Tea – and it is also added to some commercially-available energy drinks.

You can also buy Caffeine supplements over the counter and without a prescription in most countries.

Generally speaking, consuming up to around 300mg of Caffeine per day is believed to be safe for most healthy adults. That’s roughly the amount of Caffeine found in four cups of brewed coffee.

So, now it’s time to take a detailed look at the Caffeine content found in Matcha.

As we have already discussed above, Matcha typically contains more Caffeine and Theanine than regular Green Tea – but how much exactly?

An 8oz (227ml) glass of Matcha Green Tea will provide you with around 70mg of Caffeine, according to Caffeine Informer.

You should note that Match Green Tea usually uses a serving or around one teaspoon of Matcha, which is then mixed with a liquid.

Below, you’ll find a comparison of some popular drinks and their Caffeine content, so you can compare Matcha to the other types on the list.

It’s important to note that the figures shown above will vary, and they are not 100 per cent accurate.

As you can see from the comparison above, Matcha Green Tea contains more Caffeine than regular Green Tea of Black Tea.

Indeed, mixing a teaspoon of Matcha powder into water can deliver as much Caffeine as is found in a shot of Espresso.

However, Matcha contains less Caffeine than things such as Red Bull or a brewed cup of Coffee.

Many people who take Matcha in the morning report that the effects of the Caffeine are not as extreme as Coffee for example.

It is believed that this is because the Theanine found in Matcha can help to promote a feeling of ‘alert calm’.

If you are sensitive to Caffeine, it is worth bearing in mind the figures above as you discover what works for you. 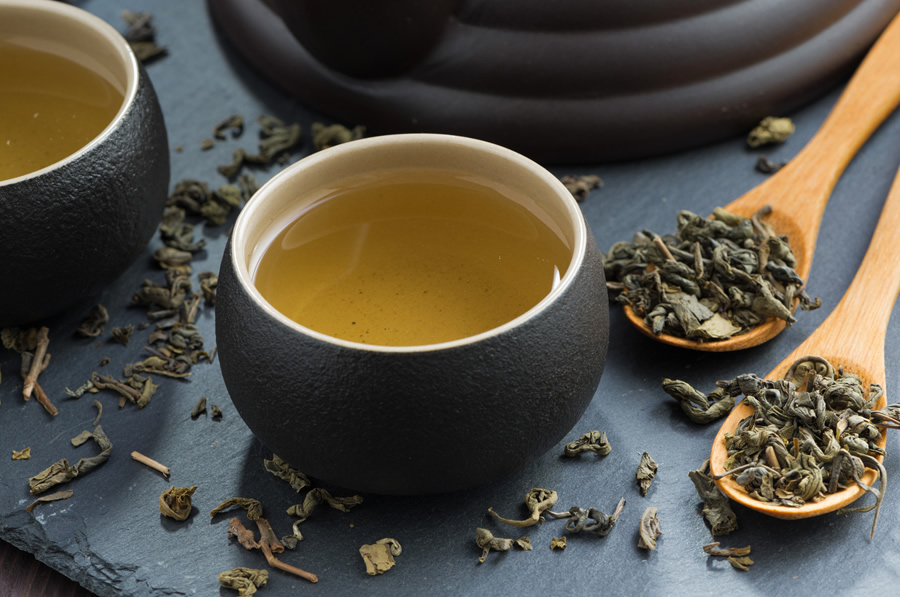 As always, we strongly recommend that you get your diet, nutrition and rest sorted before thinking about making any lifestyle changes.

That means sticking to a healthy diet, exercising regularly and making sure that you’re getting enough sleep.

Matcha and Sleep can be a cause for concern for some people due to its Caffeine content.

Matcha contains significant amounts of Caffeine, so it would be wise not to consume it too late in the day, so it won’t affect your sleep. 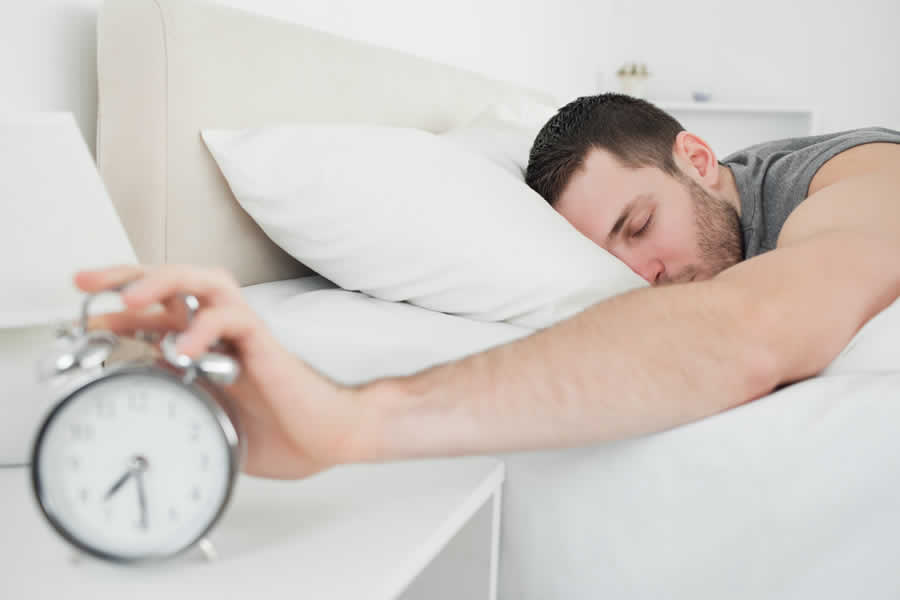 Generally speaking, we recommend that you stop consuming products which contain Caffeine eight hours before you are planning to go to bed.

Also, we all know that consuming too much Caffeine from any source can cause unwanted side-effects such as the jitters or energy crashes later in the day.

For this reason, we recommend that you don’t consume too much Matcha, or Caffeine from any other source, and keep to within a maximum limit of 300mg Caffeine in total per day.

If you are sensitive to Caffeine or have an underlying medical condition, you should speak to a medical professional before thinking about taking Matcha for the first time.

So, that brings us to the end of our look at how much Caffeine is in Matcha.

We’ve walked you through the basics about Matcha Green Tea, how it is made and how it is consumed.

We’ve also introduced the basic facts about Caffeine, the stimulant which is consumed by millions of people on a daily basis.

We have also covered exactly how much Caffeine is found in Matcha powder, and have compared that amount with other popular beverages such as Coffee, Red Bull and Regular Green Tea.

To summarize, Matcha contains around 72mg of Caffeine in 1 Teaspoon. It has more Caffeine than regular Green Tea and Black Tea.

For this reason, we don’t recommend drinking Matcha too late in the day, as the considerable Caffeine content could affect your sleep.