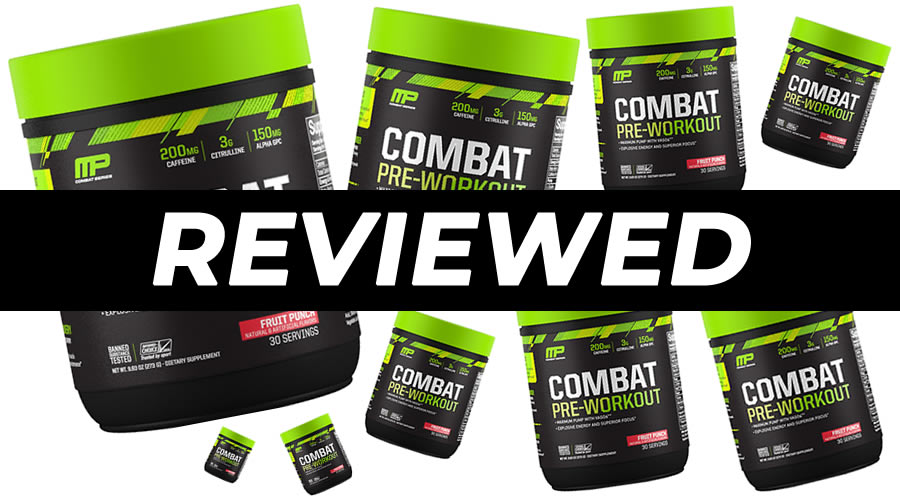 Combat Pre Workout is a supplement made by MusclePharm which claims to help support your workout goals.

If you’re looking to find out whether Combat is a pre workout supplement worth trying or not, then you’ve landed on the right page.

This Combat Pre Workout review is going to focus on all of the important things you need to know about this particular supplement as we look to see where it stands in relation to the top pre workouts on the market right now.

There a so many pre workouts on the market right now that it can be difficult to pick out the very best products.

This article is going to take a close look at the important things you need to know about Combat, paying particularly close attention to the ingredients formula, the dosages and the customer reviews.

So, now that the introductions are out of the way, it’s time to start taking a closer look at Combat to see where it stands in relation to the best products out there right now.

So, we’ve already introduced Combat as a pre workout supplement made by MusclePharm.

In case you didn’t already know, MusclePharm are one of the biggest names in the health and fitness supplements market. 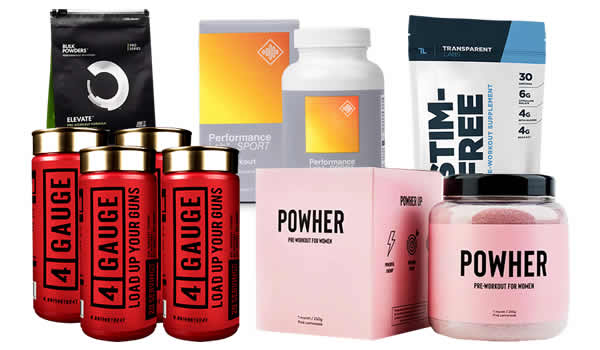 In case you didn’t know, Pre Workout supplements are products which are formulated with a number of different ingredients and that are designed to support your workout goals.

They usually contain a range of ingredients such as Caffeine and other things such as Creatine and Citrulline Malate.

Pre Workouts also often use ingredients such as Vitamins B6 and B12, which both can help to reduce tiredness and fatigue.

So, let’s now take a closer look at Combat itself.

The official website says that this supplement was specifically designed to help you enjoy a better workout and support you as you look to hit your fitness goals.

The marketing material on the official website says that it has been designed to support your goals and that the formula has undergone “rigorous” testing.

This all sounds pretty good to us so far, but we’ve learnt not to pay too much attention to what manufacturers say about their own products in their marketing material.

Instead, it’s generally better to pay attention to the important things such as the ingredients formula and customer reviews.

So, with that in mind, let’s start taking a closer look at the actual ingredients formula of Combat Pre Workout.

Let’s kick off this important section by taking a close look at the actual ingredients label of Combat Pre Workout. 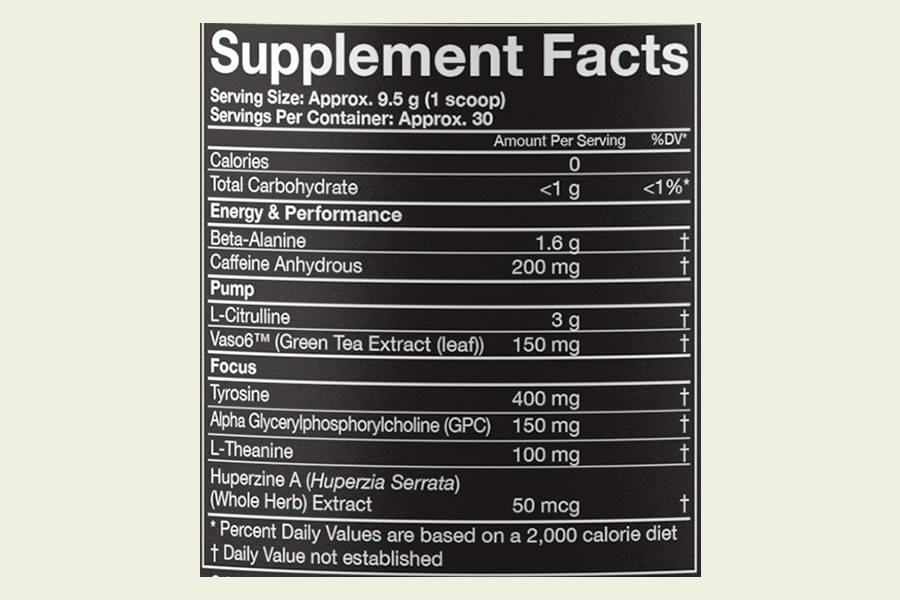 The great news here is that Combat does not use a proprietary blend. This means that we are told the exact doses of every single one of the ingredients in the formula.

We always advise that you stay away from supplements that use proprietary blends, so it’s great the Combat doesn’t use one.

Let’s now take a closer look at the main ingredients in the Combat Pre Workout formula.

• Beta Alanine – This is a very common pre workout ingredient that we’re used to finding in the top supplements. It’s a good addition to the Combat formula, and each serving contains 1.6 grams of Beta Alanine.

• Caffeine Anhydrous – This is probably the most common pre workout ingredient out there. In case you didn’t know, Caffeine is one of the most popular stimulants on the planet. You probably already know all about its benefits. Each serving of Combat uses 200mg of Caffeine, which is a fairly sensible amount, if a little on the high side.

• L-Citrulline – This is another very common and food pre workout ingredient. Citrulline is an amino acid which is found in watermelons, and each serving of Combat uses 3 grams of L-Citrulline.

• Great Tea Extract – This is something of an unusual inclusion in a pre workout supplement. That’s because we’re more used to seeing Green Tea Extract used as ingredient in so-called ‘fat burner’ supplements than anything else. That said, it’s not a bad inclusion, and each serving of combat uses 150mg.

• Tyrosine – This is another fairly common pre workout supplement and we were pleased to find it on the label of Combat. Each serving of Combat uses 400mg of Tyrosine.

• L-Theanine – The final main ingredient is L-Theanine. In case you didn’t know, L-Theanine is an amino acid found primarily in tea leaves. It’s a common supplement ingredient and we were pleased to find it in the Combat formula. It’s especially common to see L-Theanine paired with Caffeine in the same supplement, as is the case here.

The Combat Pre Workout ingredients formula is a pretty good one.

It contains a lot of our favorite pre workout ingredients such as Caffeine, L-Citrulline and L-Theanine. It also uses Tyrosine and Green Tea Extract.

However, it was a little bit of a shame not to find any Creatine in this supplement.

You probably already know all about Creatine, but you may not know that it’s a popular pre-workout ingredient because it could help to support your health and fitness goals.

With that in mind, we generally favor supplements that use small doses of Creatine in their formulas.

It was also a shame not to find any Vitamins or Minerals in this supplement.

Vitamins B6 and B12 are our two favourite vitamin ingredients for a supplement in this category – because they both support normal energy release and the reduction of tiredness and fatigue.

You can see our update guide to the leading pre workout supplements on the market right now by following the link shown below.

We did some digging online to find out what people were saying about the Combat Pre Workout.

At the time of writing, Combat had been reviewed 27 times on Amazon, and it had an average rating of 4.0 out of 5 stars, which isn’t too bad.

One happy customer left a five-star review and said that this was one of the best pre workout supplements that they had ever tried.

However, one more negative review came from somebody who gave it a one-star rating and said that it gave them a “horrible” feeling during their workout, which doesn’t sound good at all.

As with all supplements, you should speak to a certified medical professional before trying one for the first time. This is especially important if you have an underlying medical condition.

You should carefully check the label to make sure that you’re not allergic to any of the ingredients in the formula.

The main thing to be aware of when it comes to pre workout supplements is the over-use of stimulants like Caffeine.

The 200mg dose of Caffeine in this supplement should not cause too many problems – but if you’re already getting Caffeine from other sources such as Coffee, then this is something to bear in mind.

The Caffeine content means that we do not recommend taking this product too close to bedtime, because it could affect your sleep.

Is This The Best Pre Workout For Me?

We don’t currently recommend MusclePharm Combat as one of the very best pre workout supplements on the market right now.

Although it does have a lot of good ingredients, we feel that the Caffeine content is a little bit high, and it’s also missing some important ingredients such as Creatine and Vitamins B6 and B12.

You can see our updated guide to the leading five pre workout supplements on the market right now by following the link shown below.

As always, remember that there is no such thing as a magic supplement to solve your fitness problems.

You should always make sure that your diet and training regime are on point before thinking about taking any new supplements for the first time.

That means ensuring that you’re sticking to a healthy and balanced diet, and are also getting plenty of rest.

A good supplement can help to support your health and fitness journey, but it cannot make up for bad lifestyle choices.

So, that brings us to the end of our MusclePharm Combat pre workout supplement review.

Overall, we think that this is a decent product that’s made by a reputable firm and has some good proven ingredients in its formula.

It’s also great news that this supplement doesn’t use a proprietary blend.

However, we don’t quite rate it as one of the best five pre workout supplements on the market right now because it’s missing some of our favorite ingredients such as Creatine and Vitamins B6 and B12.

You can see our updated guide to the best pre workout supplements on the market right now by following the link below.

The Three Best Nootropic Supplements in 2020

Does Out of Date Protein Powder Go Bad?