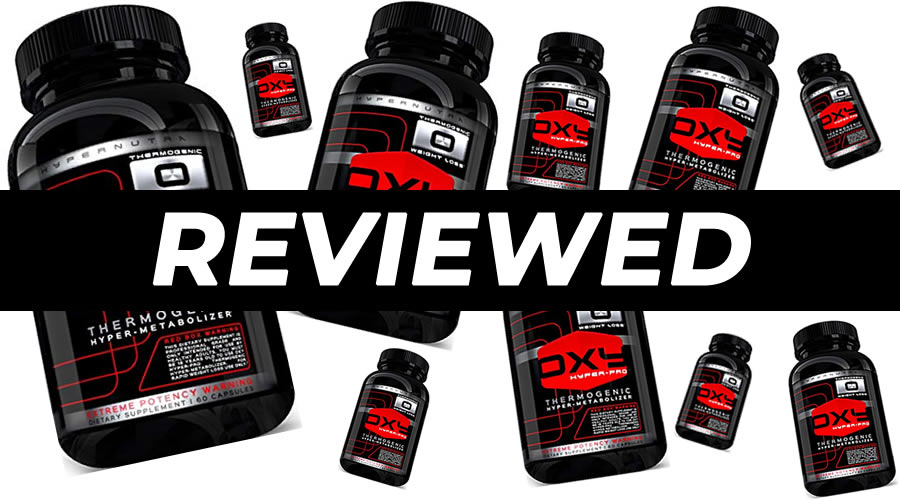 We’re always on the lookout for the latest supplements to hit the market, so we were keen to find out a bit more about the Oxy Thermogenic Hyper-Metabolizer by Hypernutra.

The name of this product is certainly quite a mouthful to pronounce, and sounds very professional – but can it live up to the hype?

It is part of the Oxy Hyper-Pro range and claims to be a supplement which has been formulated for both men and women.

We’re always looking to see where the newest supplements to go on sale rank when compared to the best so-called ‘fat burner’ supplements on sale right now, so we were eager to find out more about this Oxy Hyper-Pro product.

So many of the supplements on sale these days fall short of expectations because of below-par formulas and poor doses, so we’ve made it our mission to take a close look at as many of the products in this category as possible as we look to separate the best products from the chasing pack.

The purpose of this Oxy Thermogenic Hyper-Metabolizer review is for us to take a close look at this supplement from all angles so that we can find out where it stands compared to the competition.

We’re going to look at the ingredients, doses and customer feedback as we look rank it with the other top products on the market right now.

So, with the introductions out of the way, it’s time to take a close look at Oxy Thermogenic Hyper-Metabolizer and see where it stands.

As we’ve already established, Oxy Thermogenic Hyper-Metabolizer is a supplement marketed towards both men and women which has been formulated to help support your body goals.

It’s currently available to buy at a number of online stores, including Amazon in the US.

The official marketing material describes it as a “super-powered” supplement which promises to help support you on your fitness journey.

It claims to use a “professional grade” formula of ingredients to help achieve its effects.

According to the official listing on the Amazon website, this supplement claims to work in three main ways.

This is good to see, as a product which works in multiple ways to achieve its effects is always likely to be more effective than a one-dimensional supplement.

However, as we all know, there is plenty of manufacturer hype when it comes to health and fitness supplements.

So now it’s time to take a close look at the actual ingredients formula of this product to see whether it lives up to the hype or not.

Let’s kick off this part by taking a close look at the actual ingredients label of Oxy Thermogenic Hyper-Metabolizer. 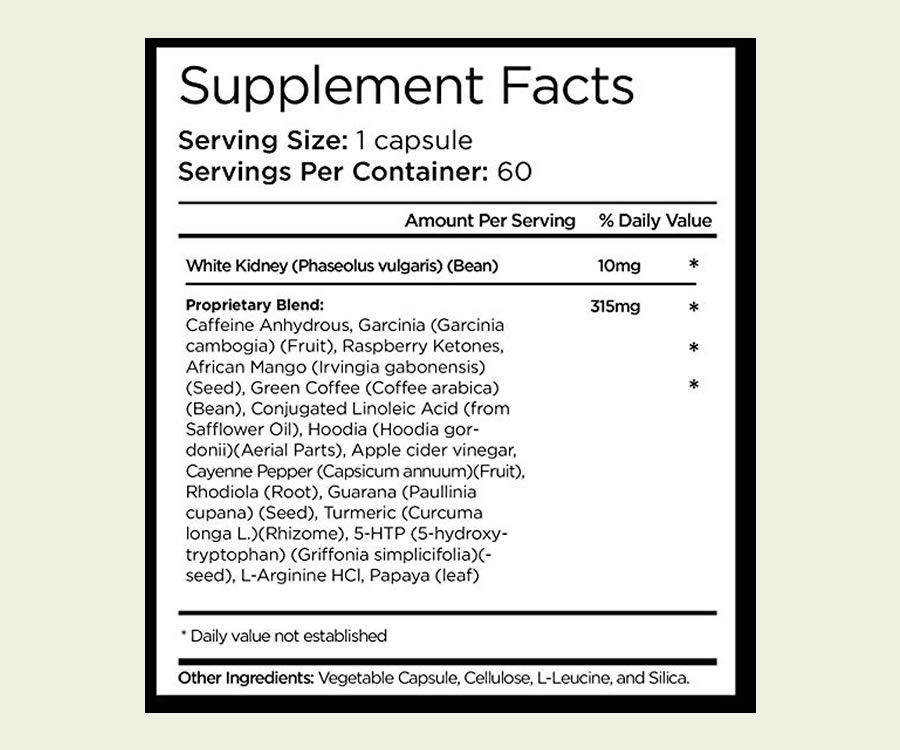 The full Oxy Thermogenic Hyper-Metabolizer ingredients formula on the label

It’s disappointing to see that Hypernutra have opted to use a proprietary blend for most of the ingredients.

It means that we don’t know the individual doses of the separate ingredients, and instead we’re only told the total dose of the overall ‘blend’.

This makes it incredibly difficult to judge effectiveness, which is why we always recommend that you don’t pick any supplements that use proprietary blends.

• Caffeine Anhydrous – This is a solid ingredient for any supplement in this category. Caffeine is a popular stimulant and you probably already know all about its benefits.

• Garcinia Cambogia – This is a decent ingredient, and is one of the main things in the market leading female focused supplement Leanbean. It’s the extract of a tropical fruit and has been shown to help with some things.

• Raspberry Ketones – This is another ingredient in Leanbean and it’s extracted from the skin of raspberries. It’s thought to work with certain things, but there are some other better alternatives to this ingredient in our opinion.

• African Mango – This is extract which comes from the seed of a West African fruit called Irvingia gabonensis. It has been linked with some benefits but there isn’t a great deal of scientific evidence or studies to back this up. Put simply, there are other more effective ingredients that could have been used in its place.

• Green Coffee Bean – A solid ingredient for any supplement in this category. In their unroasted state, green coffee beans are rich in a substance called Chlorogenic Acid. We recommend Green Coffee Bean as one of the best ingredients, so it was good to find it in Oxy Thermogenic Hyper-Metabolizer.

• CLA – Short for Conjugated Linoleic Acid, this is a group of chemicals found in a fatty acid present in things such as dairy products and beef. There have been some suggestions that CLA could help to boost certain things, however, there are some much more effective ingredients that could have been used in its place in our opinion.

• Hoodia – You’ve probably not heard of this ingredient before, and it’s not really a common inclusion in supplements like this. It’s a plant extract which has some links to some benefits, but again, there are some better ingredients that could have been used in its place. We are not big fans of Hoodia.

• Apple Cider Vinegar – This ingredient has long been linked with some good benefits, and there is some evidence that may be the case. However, we still feel that there are better substances that could have been included instead, and we don’t rate Apple Cider Vinegar as one of the best ingredients around.

• Cayenne Pepper – A great ingredient so it was great to see it used in Oxy Thermogenic Hyper-Metabolizer. It’s a potent inclusion which is usually added to the very best products in this category.

• Rhodiola – This is a common ingredient in the best pre workout supplements. It’s a plant extract which is believed to help you stay on point while working out. It’s not likely to help directly with the primary purpose of this product, however.

• Guarana – This is another stimulant ingredient. It’s a natural source of Caffeine. The worry here is that we don’t know how much Caffeine or Guarana is actually in each dose, meaning that there could be too much, which would greatly increase the risk of nasty side-effects.

• Turmeric – This is solid ingredient for a supplement in this category and is once again another of the substances found in Leanbean. The chemical Curcumin found in Turmeric can help with a lot of things, so it’s good to see this ingredient in this product.

• 5-HTP – This is a precursor to Serotonin. It’s been linked with some benefits, but we are not really convinced and would prefer to see something better used in its place.

• L-Arginine – L-Arginine is a conditionally essential Amino Acid which you usually get from your diet. Again, it’s more common as a pre workout ingredient than anything else, but we don’t really think that it’s going to help with much else.

• Papaya – The final ingredient in the Oxy Thermogenic Hyper-Metabolizer ingredients formula. We’ve not found this ingredient in may supplements before. There’s not much evidence to link it with much, so we’re going to put it down as an ineffective inclusion.

That said, the manufacturers have still managed to miss out some key ingredients in our opinion, namely:

It’s a shame that neither of these two ingredients have been included. Any supplement like this that doesn’t use Green Tea as an ingredient is a disappointment in our opinion.

You can see our guide to the updated list of the best five supplements on the market right now via the link below.

There were more than 200 Oxy Thermogenic Hyper-Metabolizer Reviews on Amazon at the time of writing.

This supplement seems to get generally positive feedback, with an average rating of 4.1 out of 5 stars.

One person called it “incredible” and said they loved it.

But the negative reviews reported that it was totally ineffective and that it caused stomach aches.

The problem with Oxy Thermogenic Hyper-Metabolizer is that the proprietary blend means that we don’t know the individual doses of the ingredients, and that includes the stimulants Guarana and Caffeine.

Too much Caffeine in one supplement can cause nasty side-effects such as the jitters or energy crashes later in the day, or even increased anxiety.

This is why we always recommend that you choose a supplement that doesn’t use a proprietary blend, because you’ll know the exact dose of the stimulant content.

We do also recommend speaking to your doctor before thinking about taking any new supplement for the first time.

Not in our opinion. Oxy Thermogenic Hyper-Metabolizer has some decent ingredients, but the fact that it uses a proprietary blend and also misses out Green Tea Extract from its formula lets it down.

You can see our updated guide to the best five supplements on the market right now by visiting the link shown below.

Never expect a supplement to do all of the hard work for you.

You should always make sure that you’re eating right and training hard before considering adding any kind of supplement to your regimen.

That being said, if you are already making the right healthy lifestyle choices, then adding a quality supplement to your regimen can indeed make a big difference to your results.

This wraps up our Oxy Thermogenic Hyper-Metabolizer review.

Overall, we were pretty disappointed that this supplement used a proprietary blend, meaning that we don’t know the doses of the ingredients used.

It was also a shame that it omitted key ingredients such as Black Pepper Extract and Green Tea Extract from its formula.

Simply put, we think that there are some my better options on the market right now.