★★★★☆
Human Window may earn revenue if you click the links and buy the products featured on this page. Find out more 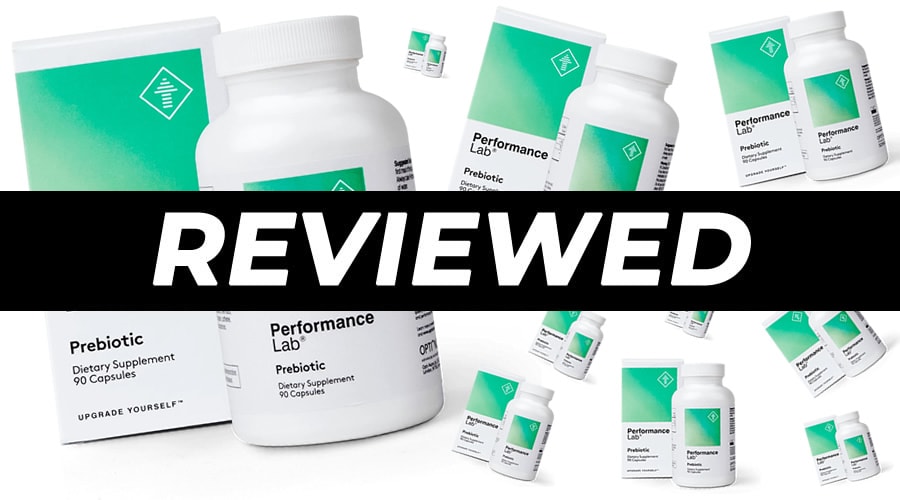 The colon has more than 400 different types of bacteria, some good and some bad.

The idea behind a prebiotic is that it can provide food for the good bacteria to grow and thrive.

Performance Lab Prebiotic is one such supplement, so let’s have a look at how it claims to work…

While the gut is known to be a complex ecosystem of both useful and unhealthy bacteria, it is generally recognised that two of the ‘good bacteria’ (also known as probiotics) are Bifidobacteria and Lactobacilli.

Performance Lab Prebiotic aims to specifically target the former, which it claims helps it to boost a number of functions in the body.

The health benefits of prebiotics and probiotics – including those mentioned above – have not yet been conclusively proven, though they have been linked with these and many more benefits unofficially. Research in this area is ongoing, but they are certainly becoming a more popular choice for people in this hectic modern world in which we live.

You also don’t need to take a supplement to add prebiotics to your diet – as they are also found in raw garlic, artichokes, whole grains and green bananas.

If these aren’t appealing, however, a supplement such as Performance Lab Prebiotic is also an option.

Prebiotics are usually sources of non-digestible fibre – in this case, from chicory root – that pass through the stomach and into the colon, where it is intended to provide food for the healthy bacteria, allowing it to grow in numbers and strength.

The theory is that this fibre, in this case Bifidobacteria, can then outgrow the bad bacteria and keep you healthy.

You can find Inulin and FOS in many fruits and vegetables, but it is particularly plentiful in chicory root, which contains around 20% Inulin and 10% FOS.

The sole ingredients in Performance Lab Prebiotic, therefore, are Inulin-FOS.

Here is the ingredient label in full as shown on the Performance Lab Prebiotic bottle: 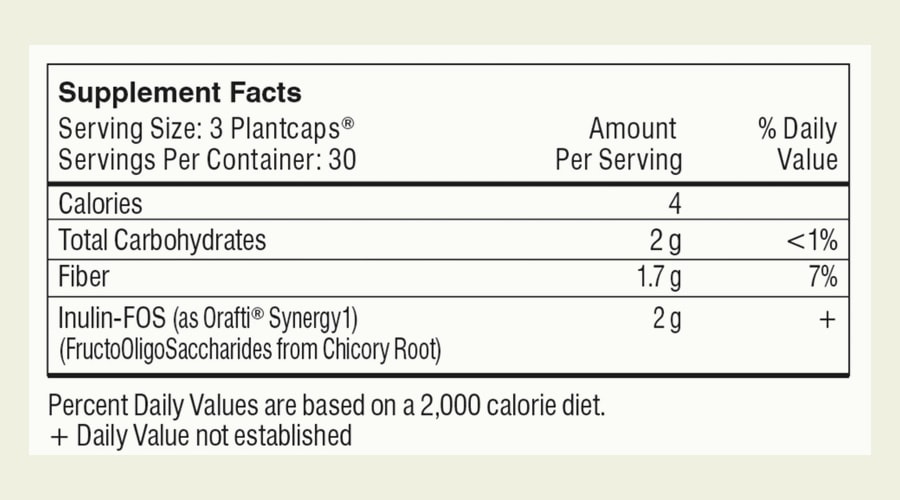 The Performance Lab Prebiotic ingredients label. As you can see, each serving of three capsules contains a total of just four calories

A good prebiotic doesn’t need to provide anything except a strong source of dietary fibre, so we’d argue that Performance Lab Prebiotic isn’t missing anything.

Or rather, the only things it is missing are allergens such as lactose, soy and gluten, as well as GMO and artificial additives. So that’s a good thing!

If you search for prebiotics, you’ll come to a quick realisation: there are more probiotic products out there than there are prebiotics.

What’s the difference? Simply put, the beneficial bacteria strains in the gut are known as probiotics, while prebiotics act as food to those probiotics. It’s a subtle distinction but a useful one to know.

You’ll no doubt come across probiotic products claiming to include anything from dozens to millions or even billions of live cultures and bacteria, ready to introduce into the body – sounds great, doesn’t it, so why wouldn’t you opt for that instead of a prebiotic? Why feed existing bacteria if you can just introduce billions of new ones?

Here’s something to bear in mind: it may not be quite as good as it sounds.

What a lot of the probiotic supplements on the market don’t tell you is that a great many of those live bacteria and cultures will be destroyed by stomach acid without ever reaching their intended target, so make sure to do your research and before taking a probiotic supplement.

All Performance Lab products are only sold via the official website and cannot be found on Amazon or in any other online or offline shop. That makes finding user reviews tricky. The official website doesn’t offer any testimonials either.

It’s the one downside of the direct sales option, but we have seen numerous positive reviews of Performance Lab Prebiotic on review websites and blogs.

Prebiotics and probiotics may still be a developing area of research, but one thing seems clear. Side effects of either seem to be rare.

That being said, you should always consult a certified medical professional before thinking about taking any new supplement for the first time or making any changes to your diet.

Sticking to a good diet and making sure that you have your other lifestyle factors on point should always come first before you consider trying any kind of supplement.

Is This the Best Supplement For Me?

Performance Lab Prebiotic could potentially be a valuable supplement for anyone struggling with digestive issues or anyone seeking to maintain a healthy gut. Unlike many other prebiotic powders and sachets on the market, its capsule form makes it easy and quick to take.

Performance Lab is also produced by respected manufacturer, Opti-Nutra, which prides itself on creating clean and ethical formulas.

It is 100% vegan-friendly, produced in FDA-approved GMP certified facilities and is caffeine free.

According to Performance Lab, Inulin-FOS may also help with certain other benefits, which can be read about on the official website..

As we mentioned above, you should not expect to see miracles from supplements such as this one.

It’s important to get your diet and lifestyle on point first before thinking about taking any new supplement for the first time.

A prebiotic supplement such as this one could help to support a number of important bodily functions, but it probably won’t do much good if you’re not sticking to a healthy diet and lifestyle overall.

The role of gut health is an emerging field of interest and more and more research seems to suggest a healthy gut can influence much more than just your digestion. Looking after your gut, therefore, would seem like a no-brainer.

Of course, like any other aspect of health, it is important to respect your body with a healthy diet and exercise regime. Looking after the basics is the first step towards good health, but perhaps a good prebiotic can be your second.

We like Performance Lab Prebiotic because it’s suitable for vegans, is one of the cleanest formulas on the market and comes from a trusted and respected manufacturer.

The capsule form also seems a lot easier to use and much less messy than measuring out powder or adding sachets to your drinks. Inulin-FOS too is a recognised form of prebiotic dietary fibre.

Performance Lab Prebiotic has also been designed to be used safely alongside any of the other supplements in the Performance Lab range should you choose to do so – from its Whole-Food multivitamin to its special supplements for sleep, energy, vision and mind, or its sports supplements.

For more information and to buy now: www.performancelab.com

The Best BCAA Supplements for Women in 2020