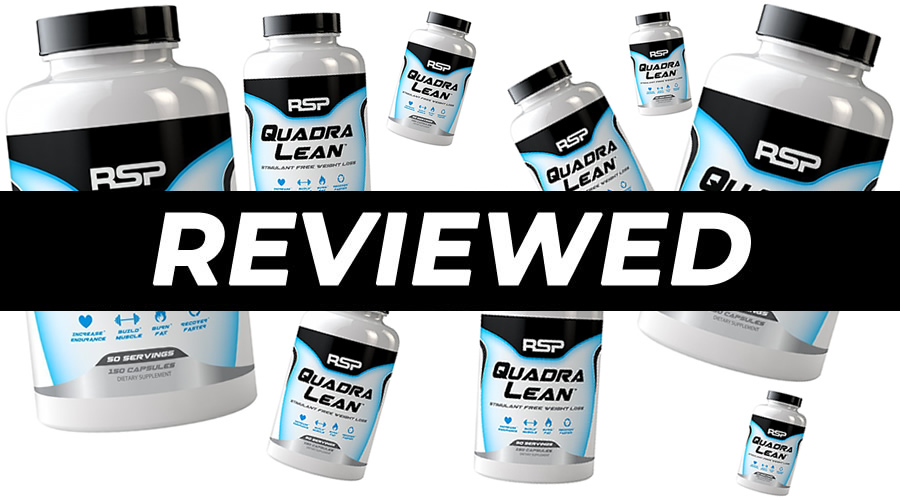 QuadraLean is a stimulant-free supplement made by a company called RSP Nutrition.

It claims to use the four main ingredients needed to help support you on your fitness journey.

We’re always looking to hear about the latest supplements to hit the market, so we wanted to find out a bit more about this fat burner made by RSP Nutrition.

We’ve made it our mission to expose the truth behind as many supplements as possible this year as we look to sort out the good products from the not so good.

As we all know, getting into your best shape is not easy, and if you’re already training hard and eating right, then adding a quality so-called ‘fat burner’ supplement to your regimen can make a difference to your results when used correctly.

That’s exactly what QuadraLean claims to do, so we’re looking forward to taking a closer look at this supplement to see whether it can live up to the marketing hype or not.

Our QuadraLean review is going to focus on all of the important things you need to know about this particular supplement, from the ingredients formula to the customer feedback, so you can decide whether this is the right product for you or whether your money would be better spent elsewhere.

So let’s get cracking and start taking a close look at this supplement.

As we’ve already established, QuadraLean is a supplement that has been designed by RSP Nutrition to help support you on your journey.

The clue is in the name – RSP say that they’ve chosen what they claim to be the four main ingredients needed to help give a boost as you take responsibility for your results.

Of course, this sounds pretty good, but frankly we’ve already heard it all when it comes to the marketing claims by manufacturers about this kind of supplement.

The real proof as to whether QuadraLean is actually any good or not will come from the ingredients formula and the customer feedback.

The QuadraLean label says that this supplement will help in a number of different ways when combined with the correct lifestyle choices.

As we mentioned about, the key to whether this supplement can deliver on its promises will be found in the ingredients formula, so let’s now take a close look at exactly what is in each capsule of QuadraLean.

Let’s begin this important section by taking a close look at the actual ingredients label found on the bottle of QuadraLean. 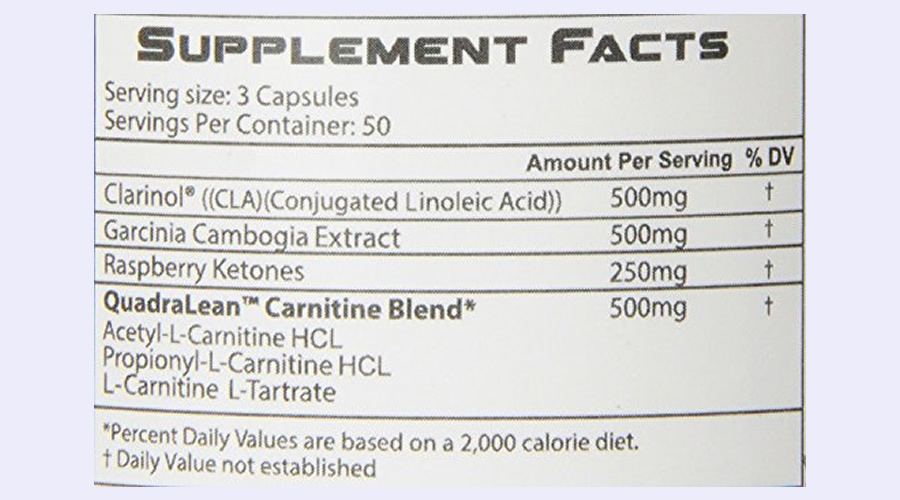 The QuadraLean ingredients formula in full

It was immediately disappointing to see that QuadraLean uses a proprietary blend for some of its ingredients.

This is when the manufacturer hides the doses of the individual ingredients used and instead chooses to only show the amount of the overall ‘blend’.

We think that proprietary blends are one of the biggest scams in the health and fitness industry, because it means that you literally do not know how much of each ingredient is being used, so the dose could be way too low to be effective, for example.

Let’s now focus on the ingredients that QuadraLean does use.

• CLA – Or Conjugated Linoleic Acid. This is one of those ingredients that we’ve found in quite a few of the supplements we’ve reviewed recently, but it’s not really one of the best ingredients for this kind of supplement. It’s a naturally occurring fatty acid found in meat and dairy products. There have been claims that it can help with a number of things, but the actual scientific evidence for this is limited at best.

• Garcinia Cambogia Extract – This is the extract from a tropical fruit and is actually one of the main ingredients in our top rated women’s supplement Leanbean. You’ll often find it in some of the leading products in this category.

• Raspberry Ketones – An extract taken from the skin of raspberries, this ingredient is also found in Leanbean and a number of other supplements in this category. As well as giving raspberries their sweet smell, Raspberry Ketones have been claimed to help with other things as well.

• Acetyl L-Carnitine – This is the first ingredient in the QuadraLean ‘Carnitine’ Blend. It’s an amino acid which is claimed to have a number of benefits. However, it’s really more suited as a pre workout supplement ingredient rather than anything else. It’s inclusion isn’t going to do any harm, but it’s not likely to help directly with the primary purpose of this product.

• Propionyl-L-Carnitine – This is a propionyl ester of Carnitine that includes an additional glycine component. Again, it’s likely to have similar effects to the Acetyl L-Carnitine. Sadly, we don’t know the dose used because it’s part of the proprietary blend used in QuadraLean.

QuadraLean is missing quite a few important ingredients in our opinion.

Here are the main things we really would have liked to see included in this supplement:

Because QuadraLean doesn’t contain any stimulants, we can forgive RSP Nutrition for not including any substances such as Caffeine in this product.

However, it was a real shame that it contains no Green Tea Extract, which is usually one of the first things we look for in products in this category.

Likewise, we were somewhat shocked that there was no Cayenne Pepper included in this supplement. Cayenne is a powerful ingredient that is commonly found in the very best products in this category.

Glucomannan, meanwhile, is a natural dietary fiber which comes from the root of the Konjac plant and is usually added to the top products in this category.

Finally, Black Pepper Extract is a great ingredient for any supplement and most of the top products in this category contain some of it.

You can see our updated guide to our pick of the leading five supplements on the market right now by visiting the link below.

We did a little bit of searching online to find all of the QuadraLean Reviews we could.

At the time of writing, there were more than 250 reviews on Amazon, and it had an average rating of 3.7 out of five stars.

QuadraLean seems to be a fairly well-received product from customers.

Among the positive reviews was one customer who said that they lost 14lbs from using the first bottle and exercising four times a week.

However, there were also some negative reviews, with one person simply saying that it “did nothing” for them.

The main problem with supplements like this is that many of them tend to overdo it on the stimulant side of things.

Too much Caffeine can cause common problems such as energy crashes or the jitters.

But that’s not going to be a problem with QuadraLean, because it doesn’t use any stimulants at all.

That being said, we do always recommend that you do some research into the ingredients used to see whether they have caused problems for other people.

Always do some of your own research before taking a new supplement for the first time.

We also recommend speaking to your doctor before thinking about using any new supplements.

Not really. QuadraLean is pretty disappointing to us because it doesn’t use lots of the key ingredients such as Green Tea Extract and Cayenne Pepper.

And it’s made worse by the fact that RSP Nutrition have chosen to use a proprietary blend in their formula.

Overall, there are some much better options right now on the market if you’re looking for a quality supplement in this category.

Always remember that there is no ‘magic pill’ when it comes to your body.

You should always make sure that you’re training hard and eating right before considering adding any kind of supplement to your regimen.

Too many people expect miracles from this sort of product, but the simple truth is that you’ll have to get your diet and training regime on point before expecting to see noticeable results.

With the above said, though, if you are already training hard and have got your nutrition on point, then adding a quality supplement to your regimen can indeed make a difference and help to support your goals.

Just don’t expect miracles from a supplement on its own.

That brings us to the end of our QuadraLean review. Overall, this supplement disappointed for two main reasons.

Secondly, it uses a proprietary blend to mask the actual doses of some of the ingredients used. This is never good news.

Simply put, we think that there are some much better supplement options available on the market right now.