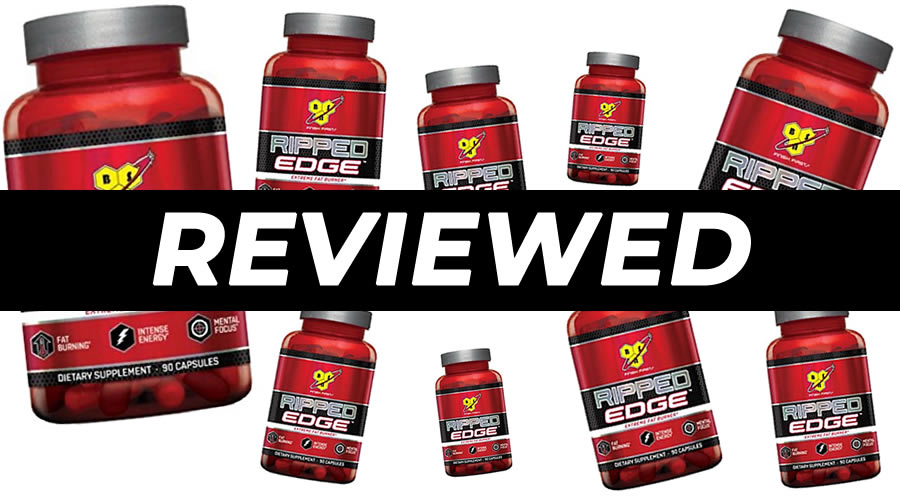 Ripped Edge is a supplement made by BSN that promises to help you speed up your results.

We’re always on the lookout for the latest fat burners to hit the market, and BSN are one of the biggest names in the supplement industry.

We’ve made it our mission this year to review all of the most popular so-called ‘fat burner’ supplements on the market.

We want to separate the good from the bad, and the terrible from the amazing.

As you’re no doubt already aware, the health and fitness industry is full of hype. Our job is to ignore the marketing spiel and separate the fact from fiction.

Our Ripped Edge review is going to focus on all of the important things you need to know about this supplement so you can decide whether it’s worth buying, or if your money would be better spent elsewhere.

So, with the introductions out of the way, let’s start taking a closer look at Ripped Edge to see whether it can live up to the hype or not.

As we’ve already mentioned, Ripped Edge is made by a company called BSN, who have some other supplements such as Clean Burn and Hypershred Edge.

Ripped Edge is marketed as the “most intense” formula to support you on your journey.

It claims to work in multiple ways to help support you as you look to hit your goals.

We always favor supplements that work in multiple ways to help you on your journey.

Ripped Edge promises to help you take your results to the next level, and it also claims to help perfect your look and get your “edge” back.

This all sounds great, but we’ve heard it all before when it comes to supplement manufacturer claims.

So now it’s time to take a close look at the actual ingredients formula of Ripped Edge to see whether it can live up to the hype or not.

Let’s begin this part by taking a look at the actual ingredients label from the bottle of Ripped Edge: 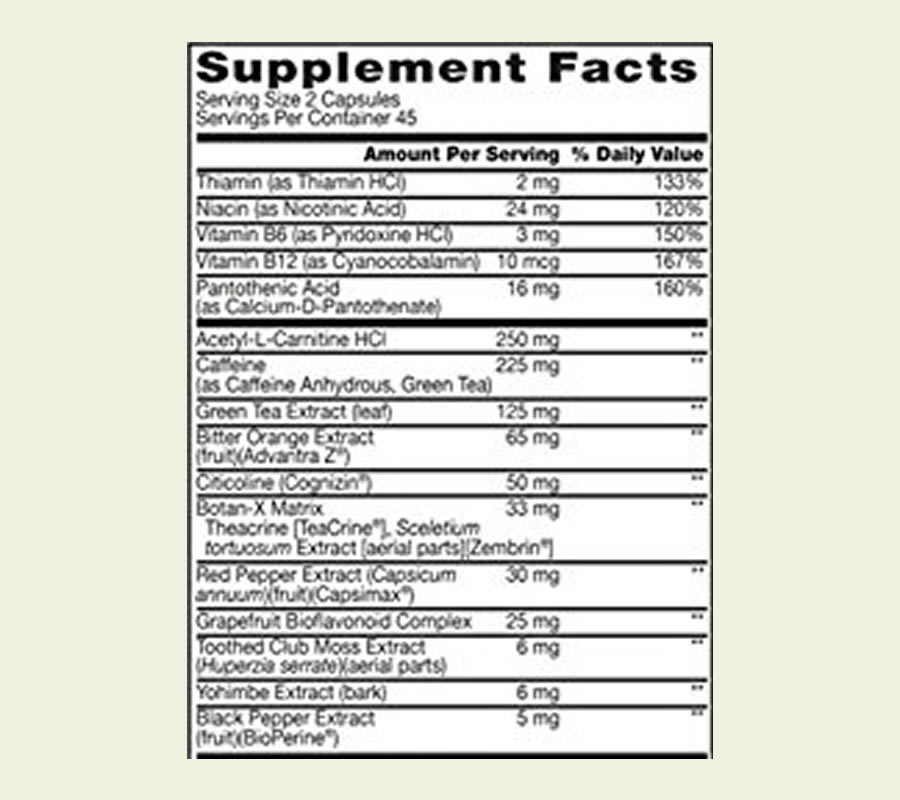 The good news is that Ripped Edge doesn’t use a proprietary blend, meaning that we know the exact doses of the ingredients used in this supplement.

We always recommend looking for supplements that do not use proprietary blends, because it means that you know exactly what is contained in each capsule.

• Acetyl L-Carnitine – This is an amino acid that we’re more used to seeing used in the top pre workout supplements. It’s believed that it can help with certain things. It’s not a bad ingredient, but it’s unlikely to help with the primary purpose of this product.

• Caffeine – Caffeine (in moderation) is a great addition to the ingredients list of any supplement like this. It’s a powerful stimulant which needs no introduction. You probably already know all about it. Each two-capsule serving of Ripped Edge contains 225mg of Caffeine.

• Bitter Orange Extract – This is one of those ingredients we’ve come across quite often in supplements like this, but we’re not too sure about it. It’s been linked with some benefits, however, it’s also known to cause side effects in some people when combined with Caffeine. For that reason, we prefer supplements that don’t use Bitter Orange in any form.

• Citicoline – This is an ingredient which is sometimes found in supplements like this, although it is not the most common inclusion. Some studies have suggested that it could have some benefits, but it’s not really one of the best ingredients in our opinion.

• Red Pepper Extract (Capsimax) – This is a good ingredient. It’s essentially the same as Cayenne Pepper, which is one of our top recommended ingredients out there right now. Most of the top supplements in this category contain at least some Cayenne Pepper.

• Grapefruit Bioflavonoid Complex – This is a powder derived from grapefruits. Grapefruit itself is thought to have a number of positive benefits, which is presumably why BSN have included it in their supplement.

• Toothed Clubmoss – Also known as Huperzia Serrata, this is a plant known as a firmoss which contains something called Huperzine A. We’re more used to seeing it in ‘nootropic’ supplements than anything else. It’s not the worst inclusion, but not the best either.

• Yohimbe Extract – This is an ingredient derived from the bark of the Pausinystalia yohimbe tree in Central Africa. It’s relatively common in supplements of this type because it’s believed to help with some things. That being said, it’s also known to cause some side effects in some people, and we don’t currently recommend it as one of the best ingredients around.

Ripped Edge does tick a few boxes with its formula by using things such as Caffeine, Green Tea Extract and Cayenne Pepper.

However, there were also a couple of key ingredients missing in our opinion, namely:

Glucomannan is a natural dietary fiber which is extracted from the root of the Konjac plant. Most of the top products in this category use Glucomannan so it was disappointing not to find it on the lable.

Meanwhile, Green Coffee Bean extract is a quality addition to any formula for a supplement like this because the unroasted coffee beans are rich in a substance called Chlorogenic Acid.

You can see our pick of the leading five supplements on sale right now by visiting the page shown below.

We did some searching online to find all of the Ripped Edge reviews we could.

At the time of writing, this supplement had only two reviews on bodybuilding.com, and only a further eight reviews on Amazon. It’s not currently available at GNC or elsewhere.

On bodybuilding.com, Ripped Edge had an average rating of 5/10, while on Amazon, this supplement was rated at 3.1 out of 5 stars. These are definitely not the best ratings we’ve seen for fat burners.

One person said they were disappointed with Ripped Edge because they noticed no effects after taking it for seven days.

Someone else said that they found the energy rush to be “overwhelming” at first, but ended up being pleased with the product.

The main issue with fat burners when it comes to side-effects is the over-use of stimulants such as Caffeine.

Each two capsules of Ripped Edge contains 225mg, which is certainly a hefty dose. However, our recommended total intake of Caffeine from supplements is 300mg per day, so it should be OK for most people.

It’s also important to be aware of the potential issues of combining Bitter Orange and Caffeine, as is the case in Ripped Edge. It’s been deemed to be a potentially unsafe combination.

As always, we do recommend that you do some of your own research into the ingredients before taking any supplement for the first time.

We also strongly recommend that you speak to your doctor before thinking about taking any new supplements.

Not in our opinion. Ripped Edge does contain some decent ingredients, but the fact that it uses some risky substances such as Bitter Orange and Yohimbe mean that we don’t rate it as one of the leading products on the market at the moment.

You can see our updated guide to the best five supplements on sale right now by clicking on the link shown below.

Remember that there is no ‘magic pill’ when it comes to your body.

You’ll have to be sticking to a healthy diet and exercising regularly if you’re going to see noticeable results.

A supplement will not do all of the hard work for you. You’ll still have to make sure that you’re training hard and eating right before adding a supplement to your regimen.

The above said, if you are already training hard and eating right, then a good supplement can indeed help to support you on your journey.

That wraps up our Ripped Edge BSN review. Overall, this is a decent supplement but its use of a couple of risky ingredients such as Bitter Orange and Yohimbe mean that we don’t rate it as one of the best products in this category at the moment.

It contains a few decent ingredients, but there are certainly better options on the market for you at the moment in our opinion.