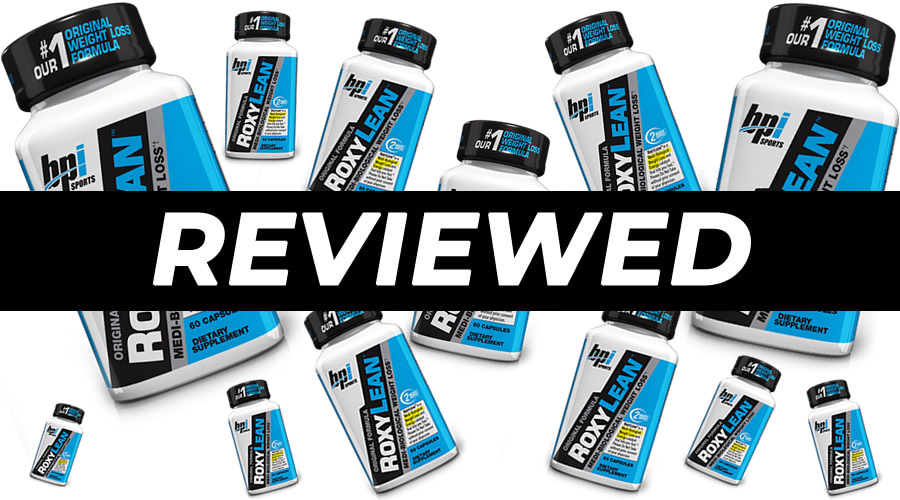 RoxyLean is a supplement for women made by BPI Sports which claims to help support your fitness goals.

We’re always on the lookout for the best so-called ‘fat burner’ supplements, and we’re especially interested in the products which have been specifically targeted at women, because most of the products in this category are either made for men or targeted at both genders.

BPI Sports are one of the big players in the health and fitness supplements industry, so we’re keen to see whether Roxylean deserves a place among the leading products on the market right now, or if your money would be better spent elsewhere.

It’s marketed as an “extremely powerful” supplement that will work in multiple ways to help you on your fitness journey.

It also claims to have you seeing results in no time as it helps to hit your goals.

The aim of this RoxyLean review is for us to take a close look at this particular supplement from all angles as we look to determine how good (or bad) this product is.

We’re going to take a close look at the ingredients formula, customer reviews and doses as we look to try and determine where this supplement ranks compared to the leading products on the market right now.

So let’s get cracking and start looking at RoxyLean in a bit more detail to find out a bit more about this supplement and see where it stands.

As we’ve already deduced, RoxyLean is a female focused supplement that has been specifically designed to help support you as you take responsibility for your body.

It’s marketed as a “powerful” supplement, and it is claimed that the highly-concentrated formula will help you on your journey pretty quickly.

The official website says that this product has been designed to work in three main ways to help support your goals.

It’s great to see that this supplement has been formulated to work in multiple ways to help give you a boost.

The leading supplements on the market all work in more than one way to help make it easier for you to hit your goals.

According to the official website, this particular supplement was scientifically designed to help you hit the goals that you’ve been working towards.

It also claims that RoxyLean has been designed to help with a number of other things as well.

So, as you can see from the above, RoxyLean is certainly not short of claims from the manufacturer.

We’ve heard it all before when it comes to manufacturer claims about supplements like this.

So now it’s time to see whether this product can actually live up to the marketing hype or not as we take a closer look at the ingredients label.

Let’s begin this part by taking a closer look at the actual RoxyLean ingredients label as it’s displayed on the bottle. 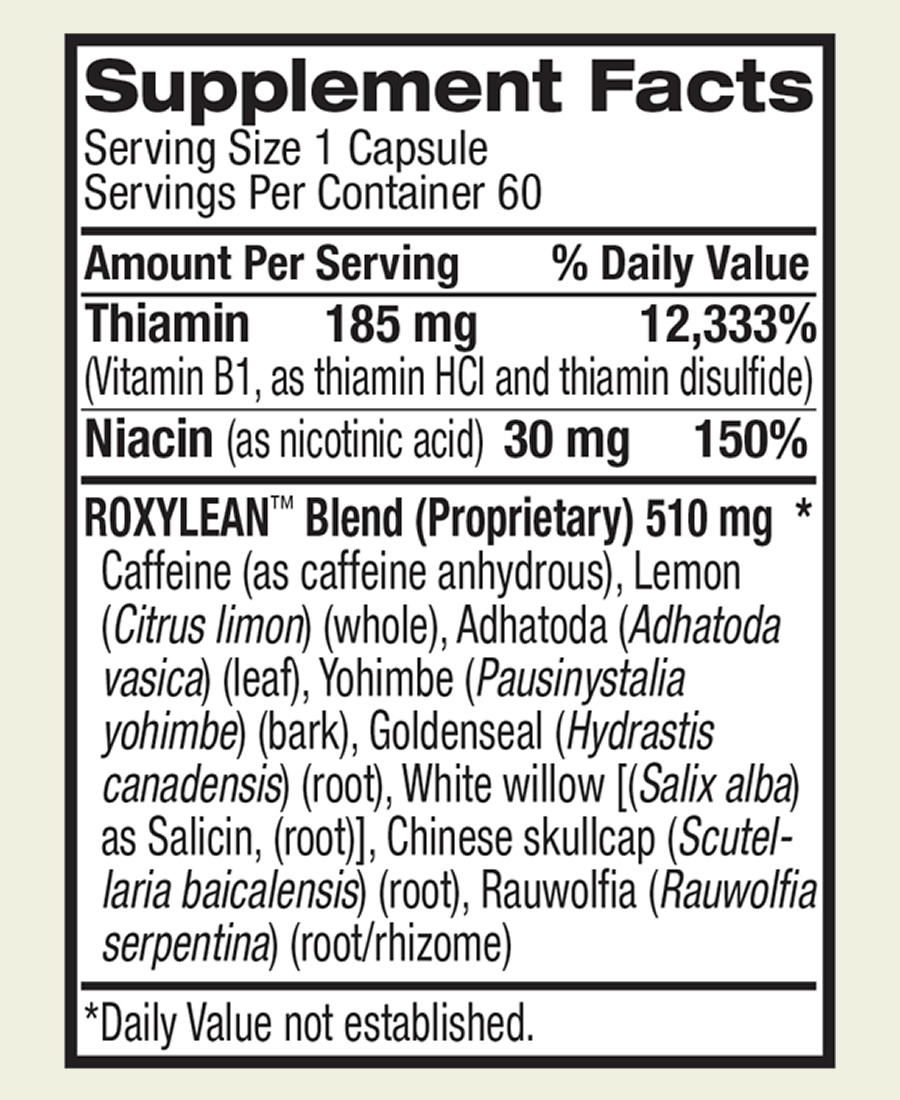 As you can probably see for yourself, RoxyLean uses a proprietary blend, which is not good news at all.

Proprietary blends are just an excuse for supplement manufacturers not to fully disclose the doses of the ingredients used.

This is never good news because it makes it incredibly difficult to assess whether a supplement is actually going to be effective or not if the doses of the ingredients are hidden.

We always recommend that you steer clear of any supplements that use proprietary blends. We think that there’s no excuse for manufacturers not to be totally transparent with their formulas in this day and age.

Let’s now focus on the ingredients that RoxyLean does actually contain.

• Caffeine Anhydrous – This is a solid place to start for any supplement like this. Caffeine is a popular stimulant which you probably already know all about. Anhydrous is also one of the purest forms of Caffeine around. The problem, though, is that we don’t know the dose used because of the proprietary blend, which isn’t ideal.

• Lemon Extract – We’ve not come across Lemon Extract in many similar supplements before. There’s really not much evidence to suggest that Lemon Extract will help to speed up your results, so it’s not the most effective inclusion in the RoxyLean formula. BPI Sports say that they’ve included it for its apparent ability to help with sticking to your diet.

• Adhatoda – Also know as the Vasaka Leaf, this is a plant extract found in a few supplements these days. It has a number of potential benefits, although more research is needed. But once again, there’s not much evidence linking it directly to the primary purpose of this particular supplement.

• Yohimbe – This is a quite a popular ingredient these days, but it’s not really one of the best. It’s an extract from a tree bark found mainly in central Africa, and has been linked to some benefits. However, it’s been known to cause side effects in some people, so we don’t rate it as one of the best inclusions. We prefer to stay away from this one.

• Goldenseal – This is not an ingredient we’ve come across in many supplements before. It’s claimed to have some benefits, but we’re really not convinced about it at all.

• White Willow – BPI Sports say that they’ve included White Willow in this supplement because of its ability to “extend” the effects when combined with other ingredients. However, we think that a more effective ingredient could have been used in its place.

• Chinese Skullcap – This is a herb which is thought to have some beneficial properties. It could well be useful for certain things. But again, there’s not much evidence linking it directly with the primary purpose of this supplement.

• Rauwolfia – An ingredient which is believed to help with a number of different things. It’s also thought to work in similar ways to Yohimbe, but we don’t rate it as one of the best ingredients for a supplement like this one.

The RoxyLean formula really leaves quite a lot to be desired in our opinion. It has a few decent inclusions such as Caffeine, and B Vitamins, but it’s also missing some key ingredients, such as:

Cayenne Pepper and Green Tea extract are two of the best ingredients around, and we always recommend that you choose products that contain these two substances.

Glucomannan, meanwhile, is a dietary fiber taken from the root of the Konjac plant which is usually found in the very best supplements in this category.

Black Pepper Extract is a great ingredient for any supplement because it’s been shown to help potentially make for a more effective product overall.

You can see our guide to the best supplements on sale right now by clicking on the link shown below.

We did some digging and found 105 RoxyLean reviews on Amazon.

At the time of writing, this supplement had an average rating of 3.3 out of 5 stars.

One customer said that this supplement worked great for them and helped them on their journey.

Someone else reported that they ended up ordering a full bottle after having tried a free sample at first and being impressed.

However, there were also some negative reviews. One person said that it made them very lethargic.

Someone else reported that they had a “horrendous” reaction to the supplement after having taken it for five days.

The problem with the RoxyLean formula is that because it uses a proprietary blend, we don’t even know how much Caffeine is contained in each capsule.

This is not good at all, because we all know that too much Caffeine can cause side effects such as the jitters and energy crashes.

As we’ve already touched on, Yohimbe has been known to cause side effects in some people, so this is worth bearing in mind as well.

Of course, we do also always recommend that you do some of your own research into any supplement that you’re considering taking for the first time.

We also recommend speaking to your doctor before taking any new supplement for the first time.

Definitely not. Not only does the RoxyLean ingredients formula disappoint, but it was also a real shame to see that it uses a proprietary blend to mask the ingredient doses.

Remember that you can see our updated guide to the leading five supplements on the market right now by visiting the link shown below.

You should never expect a supplement to do all of the hard work for you.

The first things you should always do is make sure that your diet and training regime are both on point.

That being said, if you then add a quality supplement to your regimen, alongside a healthy lifestyle, then you can expect to see some pretty good results.

Just make sure that you use the supplement as it was intended – alongside a good diet and solid training regime.

That brings us to the end of our RoxyLean review.

Overall, we were pretty disappointed by this supplement.

Not only does this BPI Sports product not contain some key ingredients such as Green Tea Extract and Cayenne Pepper, but matters are made worse by the fact that it uses a proprietary blend to hide the doses of the substances used.

Simply put, we think that there are some far better products on the market right now.