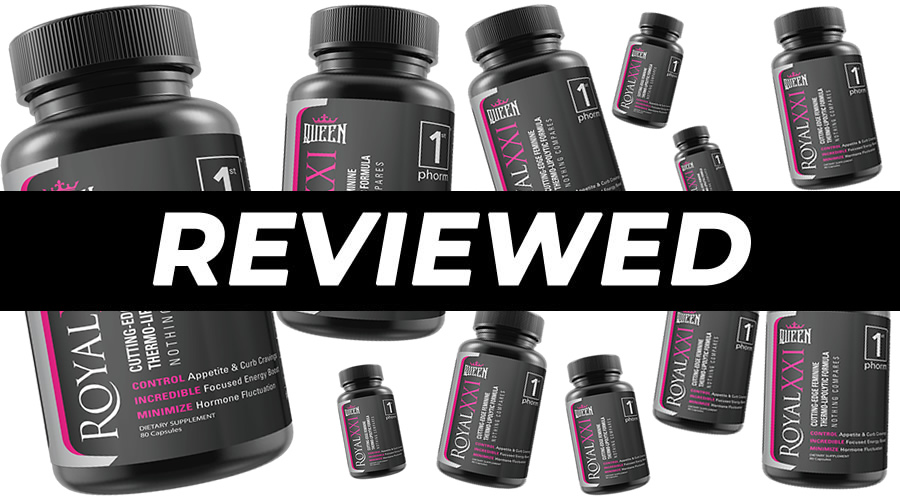 Royal 21 Queen is a female supplement marketed and manufactured by a company called 1st Phorm.

We’ve already recently reviewed the Royal 21 King product, which is the men’s equivalent, so we thought that it was about time we took a look at the Royal 21 Queen supplement.

If you’re looking to find out all of the important things there are to know about the Royal 21 Queen fat burner, then you’re in the right place.

Our Royal 21 Queen review is going to focus on all of the key things that you need to know about this product as we look to see whether it deserves a place on our list of the best so-called ‘fat burners’ for women on the market right now.

In case you were not already aware, it’s important to realise that most of the supplements in this category, including the one featured on this page, have not been proven to help with fat loss and fat burning.

The problem is that there are so many products on the market right now (and let’s face it, most of them are rubbish), that it can be difficult to pick the best products.

These types of supplements sometimes get a bad rep, but the truth is that there are some quality products out there, you just need to know what to look for.

So let’s now get cracking with our Royal 21 Queen review as we look to see where this product stands.

As we’ve clearly already deduced, Royal 21 Queen is a supplement that’s been specifically designed to help women with their goals.

It’s made by a company called 1st Phorm, whose products are currently only available to buy on the official website, so you won’t find these supplements on stores such as Amazon or GNC.

According to the bottle, “nothing compares” to this supplement for women, which is claimed to work in a number of different ways.

It’s good that 1st Phorm have formulated this product to work in multiple ways.

Of course, taking a close look at the ingredients is going to give us the best idea as to whether this supplement can actually deliver on its promise or not.

This supplement claims to be “like nothing you have ever tried”. We’re not too sure what this means, but it sounds like marketing hype to us.

The marketing material on the official 1st Phorm website says that Royal 21 Queen will help you to take your results to a whole new level.

So, Royal 21 Queen is certainly talking a good game, but how will it fare when we take a close look at the ingredients of this supplement?

Let’s now start taking a look at the ingredients formula to see whether it can live up to the hype or not.

Let’s begin this crucial part by taking a look at the actual ingredients label of Royal 21 Queen as printed on the bottle. 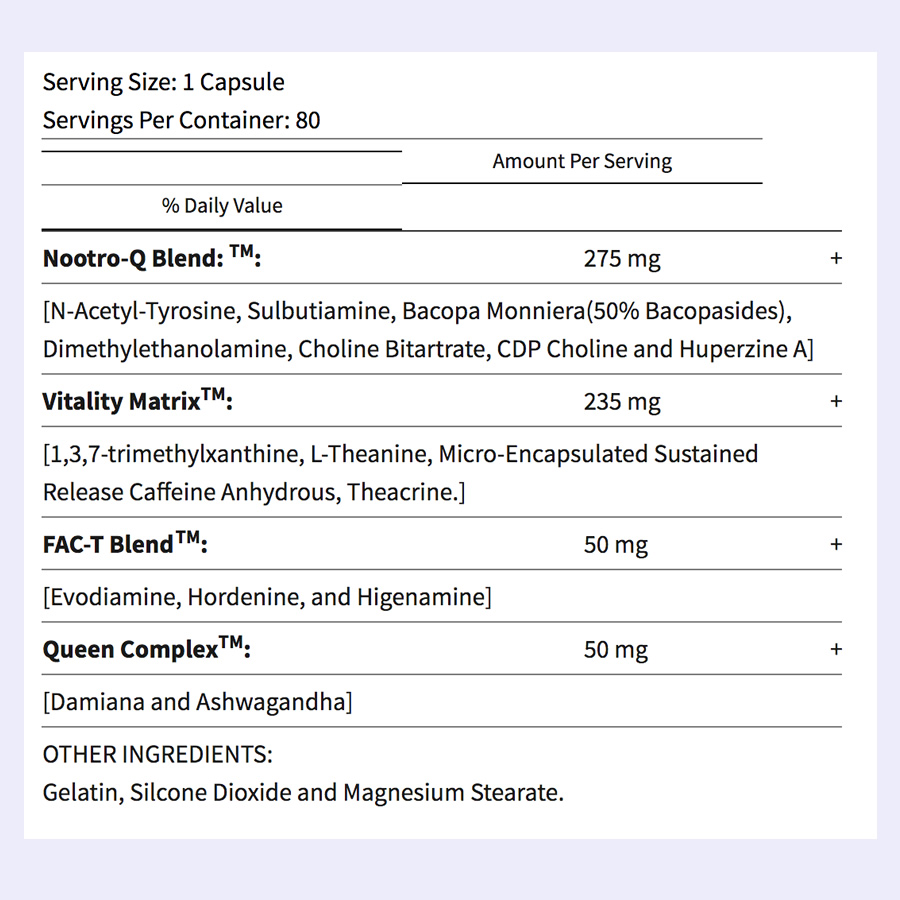 The Royal 21 Queen ingredients formula. Much to our disappointment, this supplement uses a proprietary blend

Firstly, we should point out that we were very disappointed to discover that this supplement uses a proprietary blend.

We always advise our readers to stay away from supplements that use proprietary blends, as they make it much harder to judge the actual effectiveness of the product.

That’s because they mask that actual doses of the individual ingredients in a total ‘blend’, meaning that we don’t actually know how much of each ingredient is used.

This isn’t good news, and there’s really no excuse for the use of a proprietary blend in our opinion.

• N-Acetyl-Tyrosine – This is an acetylated derivative of the amino acid L-Tyrosine. It’s not a bad inclusion in the formula because L-Tyrosine is believed to help with certain things, and it’s used in some pre workout supplements. However, we must say that there are some other better ingredients that could have been used in its place.

• Sulbutiamine – You’ve probably not heard of this ingredient before, and it’s certainly not the most common of inclusions. However, it’s probably more common than you might have thought, because it’s essentially a synthetic version of Vitamin B1. B Vitamins are always good inclusions because they can help to support a number of bodily processes. However, we would have preferred to have seen either B12 or B6 (or both) used instead of B1.

• Bacopa Monnieri – This is an ingredient that we’re more used to finding in nootropic supplements. It is thought to be able to help with certain things. However, there’s not much evidence linking it directly to the primary purpose of this product, so we’re not too sure why it’s been included in the Royal 21 Queen formula.

• Dimethylethanolamine – Known as DIM for short, this is actually an ingredient that we’re more used to finding in so-called ‘testosterone booster’ supplements than anything else. We presume that 1st Phorm have used it in this case because it could potentially help with certain things. Again though, it’s not likely to help directly with much.

• Choline Bitartrate – This ingredient is part of the B-Complex vitamin family. It’s found in some similar supplements in this category. This is definitely a good thing. However, there are certainly some more top ingredients that could have been used in its place.

• CDP Choline – This ingredient is also known as cytidine diphosphate-choline. Once again (we feel like we’re repeating ourselves a lot here), this is not one of the very best ingredients around right now. That said, Choline could have some benefits.

• Huperzine A – This is something called an alkaloid which is found in a plant called club moss. Again, it’s believed to be something of a nootropic ingredient. It’s not a bad thing, but it seems like another strange inclusion for a supplement in this category.

• L-Theanine – This is an amino acid found in tea leaves which is regularly used as an ingredient in some of the top pre workout supplements along with Caffeine. We think it’s a decent inclusion in the Royal 21 Queen formula.

• Caffeine Anhydrous – Finally, a high quality ingredient in Royal 21 Queen. Caffeine is a great ingredient and you probably already know all about its benefits. It’s one of the most widely researched ingredients around. It’s a good inclusion in the formula.

• Theacrine – This is another stimulant ingredient included alongside Caffeine. But we’d question why 1st Phorm chose to include two different stimulants in this supplement.

• Damiana – The final ingredient in Royal 21 Queen is not one we’ve come across very often. It’s a plant extract from a shrub native to southern Texas in the United States, Central America, Mexico, South America, and the Caribbean. There are some claims online that it could help with certain things. However, we would have much preferred to see a more proven ingredient used in its place.

The Royal 21 Queen formula has a few good inclusions such as some B Vitamins, and we like it that they’ve combined L-Theanine with Caffeine.

However, most of our top rated ingredients were also missing from this supplement. Here are the main omissions:

Cayenne Pepper is one of our favorite ingredients and it was a real shame not to find it on the label.

Green Tea, meanwhile, is a great ingredient that is usually found in the top products in this category.

Glucomannan is a dietary fiber which comes from the root of the Konjac plant and is included in the top supplements in this category.

And Black Pepper Extract is one of the most common ingredients in a supplement like this.

Check out our updated guide to the leading five supplements on the market right now via the link shown below.

We did some digging online to find some Royal 21 Queen reviews.

We found a number of them on the official website, and because it’s not on sale on Amazon or other places like GNC, we’ve had to go on the reviews shown on the 1st Phorm side.

Naturally, there were a lot of positive reviews about this supplement on the official website.

One person said that they loved the product because it helped them to increase their energy levels and they said that it was “phenomenal”.

We did manage to find one negative review on the official website, from someone who claimed that although the capsules were easy to swallow, the product was not something that they would rave about.

What About Royal 21 Queen Side Effects?

The Royal 21 Queen formula looks like a relatively safe one, so you shouldn’t have to worry too much about it causing any nasty side effects.

That being said, we don’t like the fact that the Caffeine Anhydrous is used as part of a proprietary blend, as this means that we don’t know how much each serving contains.

Too much Caffeine can trigger side effects such as energy crashes or the jitters, as well as increased anxiety.

We always recommend that you do some of your own research into the ingredients yourself before trying any new supplement for the first time.

You should consult your doctor before taking any new supplement for the first time.

Not in our humble opinion. Royal 21 Queen does have some good ingredients such as Caffeine and B Vitamins, but this supplement is still missing a lot of our favorite ingredients out there right now such as Cayenne Pepper and Green Tea.

Remember that you can see our updated guide to the very best five supplements on the market right now by following the link shown below.

Just remember that a supplement like this is not going to do all of the hard work for you.

You should never forget that the two main keys for getting into shape are making sure that you’re training hard and eating right.

That being said, if you’re able to combine a healthy lifestyle with the right training regime and nutrition, then adding a quality supplement to your daily regimen can help to support your goals.

That brings us to the end of our Royal 21 Queen review.

It’s missing some of our favorite ingredients, and it also uses a proprietary blend to hide the doses of the substances used to make matters worse.

In summary, there are some far better female options out there on the market right now.