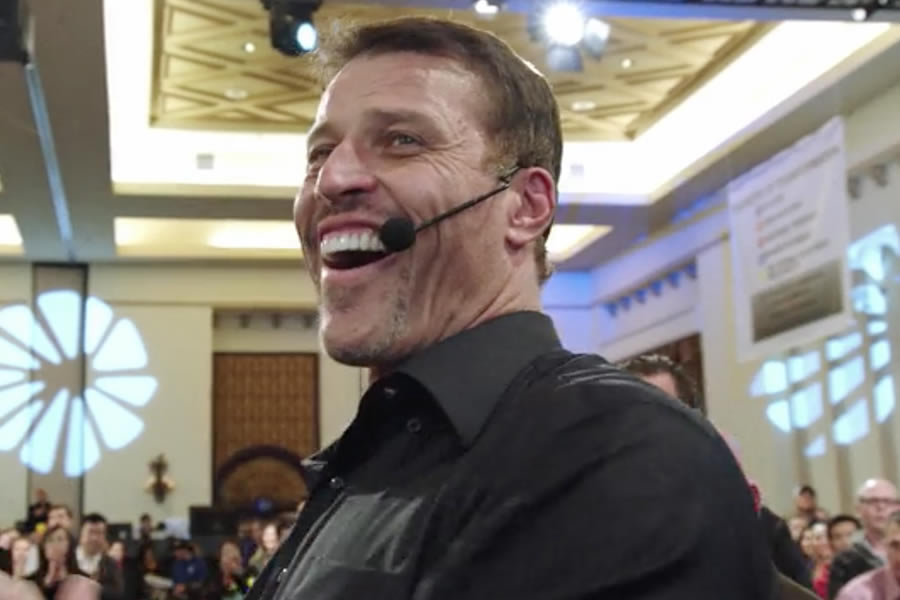 He is widely regarded as one of the godfathers of the personal development industry and has one of the biggest audiences in the sector.

Tony Robbins is well known for his unique seminars and self-help books, as well as his work as a business strategist.

But where did Robbins’ journey start and what can we learn from him?

This profile of Tony Robbins is going to focus on the key things you need to know about him – as well as the positive things we can learn from looking at Robbins’ life as an example.

So, without further ado, let’s start taking a closer look at Tony Robbins to see what is behind this inspirational character.

Who is Tony Robbins?

Tony Robbins can be considered as one of the most famous life coaches in the world.

His work has touched millions of people worldwide and he has been internationally recognised for the positive impact he has had on so many people’s lives.

You’ve probably heard of Robbins’ work in some capacity before. For example, you may have come across the 2016 Netflix documentary I Am Not Your Guru, which follows Robbins during one of his Date With Destiny seminar events.

Or perhaps you have read one of his books. He has published five books in total, including Unshakeable (2017) and Awaken the Giant Within (1991). 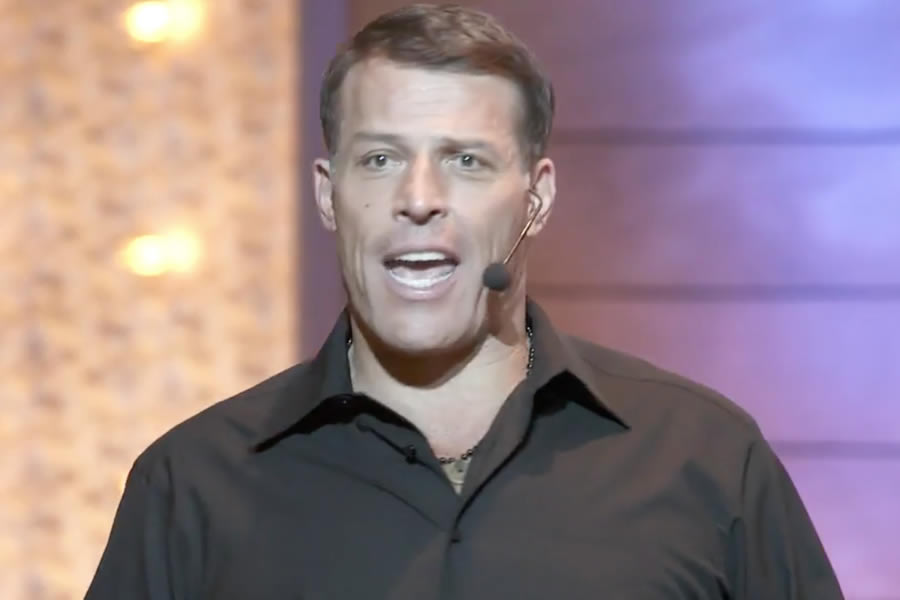 Maybe you have even been lucky enough to attend one of his seminars. Robbins runs many seminars across the world and they are often attended by thousands of people.

Tony Robbins was born in North Hollywood, California, on February 29, 1960. He is the eldest of three children and his parents divorced when he was just seven years old.

His mother remarried more than once, and that included a marriage with Jim Robbins, a former semi-professional baseball player who legally adopted Tony when he was 12 years old.

During high school, Robbins grew 10 inches. It later emerged that the growth spurt later attributed to a pituitary tumor.

His home life was believed to be difficult for him, and he ended up leaving home and not returning when he was 17 years old.

Tony Robbins began his career promoting seminars for the motivational speaker and author Jim Rohn when he was 17 years old.

Since then, he has built a career in the personal development space and has amassed a huge following worldwide.

His seminars include Unleash the Power Within, Business Mastery and Leadership Academy.

Date With Destiny is perhaps his most famous event. It is a six-day seminar in which users are guided to discover what motivates them, realign their values and create more empowering beliefs.

Tony Robbins also has a massive following on social media. 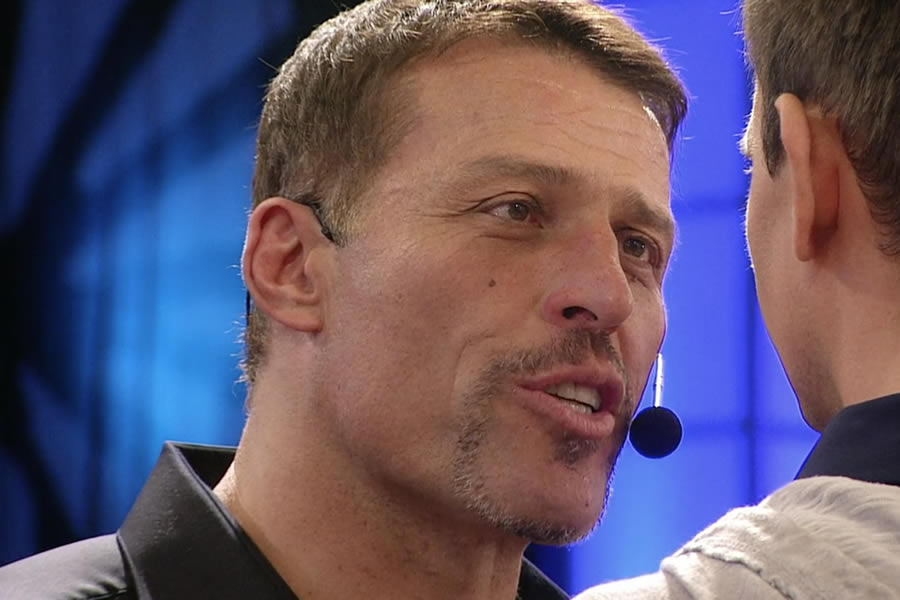 During his decorated career, he has coached people from all walks of life.

They include US presidents and athletes such as Serena Williams and Andre Agassi.

Whether you are just starting out in personal development, or if you are already well-versed in the topic, there is no doubt that Tony Robbins will have something to offer you.

These days, Tony is more popular than ever, and he can be followed on social media, where he spreads his positive messages to his millions of followers.

So, it is clear that Tony Robbins has risen from relative obscurity to being one of the top life coaches on the planet.

According to most of the leading celebrity wealth websites, Tony Robbins is believed to have a net worth of around $500m.

He is also listed in the 62nd position on Forbes’ wealth power rankings.

According to Forbes.com, Tony Robbins commands as much as $300,000 for speaking engagement. It is also claimed that his Unleash the Power Within program nets him around $9m annually. 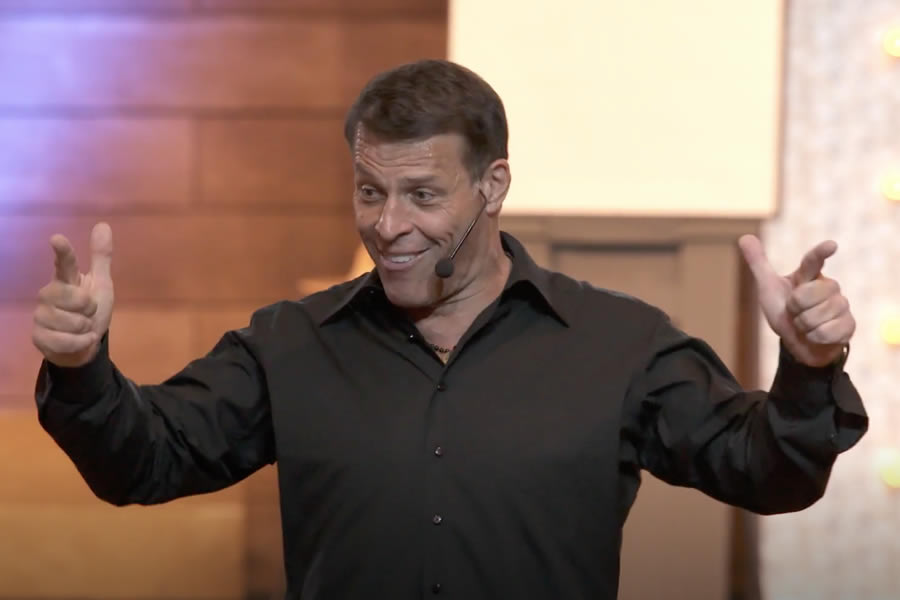 Tony Robbins is a tall guy. You’ve probably already noticed that he is a larger-than-life character, but he is also a huge presence in real life!

In case you didn’t know, Tony Robbins stands at 6ft 6in tall.

This can, in part, be attributed to the growth spurt he experienced when he was in high school, which was later attributed to a pituitary tumor.

What’s with the Tony Robbins Firewalk? You may be asking this question after having heard rumours about his seminar attendees being asked to walk on hot coals.

It may sounds crazy, but it is true!

Firewalking is one of the options at Tony Robbins’ Unleash The Power Within events.

In case you didn’t know, Firewalking is an ancient ritual practiced by different cultures around the world to demonstrate strength, courage and faith.

Participants at some of Tony Robbins’ seminars have the option to walk along burning hot coals.

One the official Tony Robbins Firewalk website, there is a warning saying that you should never try firewalking alone and that it requires hours of practice and training.

In 2012, it was reported in the San Jose Mercury that 21 people were treated for burns after a firewalk at a Tony Robbins Unleash the Power Within event.

Tony Robbins has been married twice.

He married Rebecca Jenkins in 1984 after meeting her at a seminar. The couple filed for divorce in 1998.

In October 2001, Robbins married Bonnie “Sage” Robbins. They are still together and currently live in Palm Beach, Florida.

Tony Robbins has four children, including Jairek Robbins, who he fathered with his former girlfriend Liz Acosta. 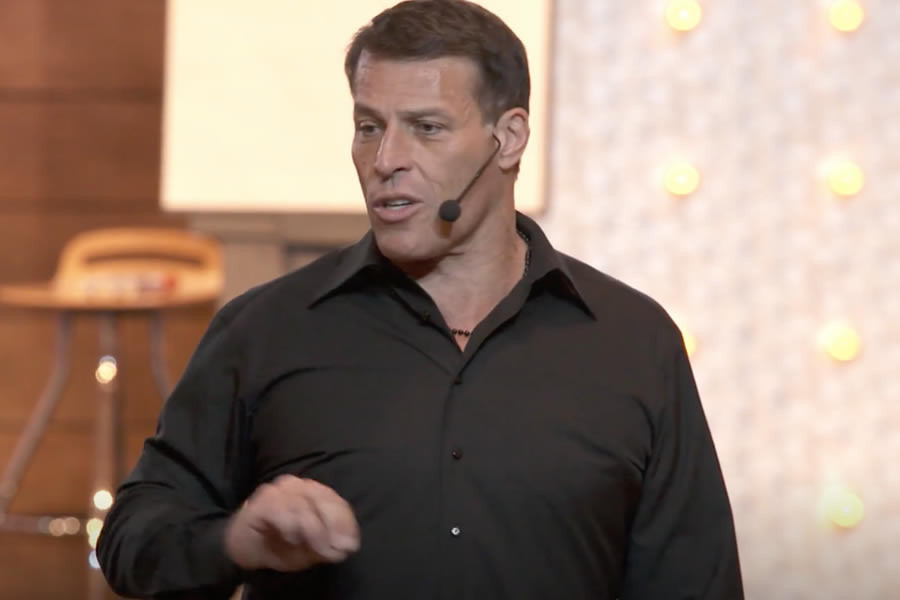 Of course, Tony Robbins is very famous for his seminar events.

The ones he currently runs include:

They take place in various locations across the world, and vary in terms of price and duration.

The Netflix documentary, I Am Not Your Guru, (released in 2016) was filmed at the Date With Destiny event in Boca Raton, Florida, which was attended by more than 2,500 people.

Being a motivational speaker and life coach, Robbins has some brilliant quotes that can help us in our day to day lives.

Here are some of the best Tony Robbins quotes:

“In life you need either inspiration or desperation.”

“The power of positive thinking is the ability to generate a feeling of certainty in yourself when nothing in the environment supports you.”

“Setting goals is the first step in turning the invisible into the visible.”

“There is a powerful driving force inside every human being that, once unleashed, can make any vision, dream, or desire a reality.”

“It is in your moments of decision that your destiny is shaped.”

“Three decisions that we all control each moment of our lives: what to focus on, what things mean, and what to do in spite of the challenges that may appear.”

At the time of writing, Tony Robbins had published a total of five books.

They are listed below, along with year and publisher.

What Can We Learn from Tony Robbins?

Clearly, Tony Robbins is one of the most inspirational figures in the personal development and life coaching industry.

He has risen from relative obscurity and poverty to establish himself as one of the leading voices in the personal development industry.

He has coached countless celebrities and athletes and is one of the most powerful speakers on the planet.

He carries with him an air of almost aggressive positivity that is infectious for those around him.

We could all do worse than follow Tony Robbins’ example when it comes to how to behave when dealing with adversity and building our best possible life.

Fortunately, his message is now able to reach more people than ever, and it seems that he is set to have a bigger impact than ever as the years tick by.

So, that brings us to the end of our Tony Robbins biography.

Tony’s story is a truly inspirational one that we could all learn from.

He has risen above a difficult childhood and upbringing to establish himself as a positive driving forces of change in the personal development industry.

Tony deserves credit for the way he has handled himself over the years and dedicated his life towards helping other people to achieve their goals and live in a beautiful state.